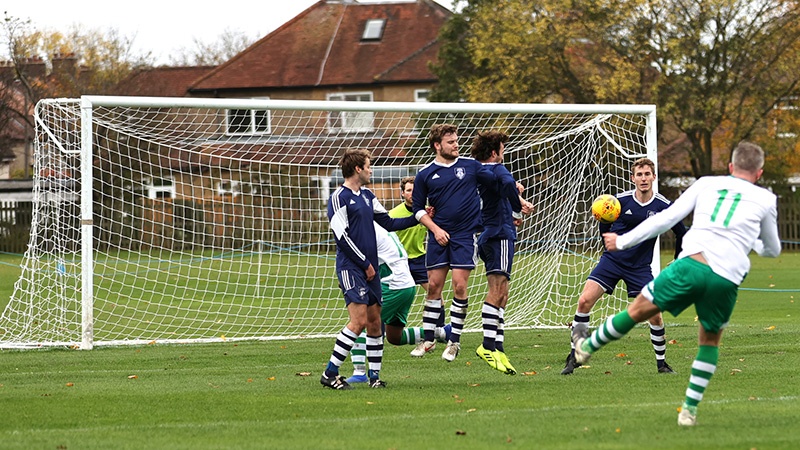 For the second week in succession the OHAFC 2nd XI found themselves comprehensively beaten by a far superior side, the Old Johnians running out comfortable 5-0 winners in the first ever meeting between the two teams. Although the Blues enjoyed moments of ascendency during the game, they could not match the quality or aggression of their opponents, who scored three fine goals before the break and added a couple more in the second half, aided by some fortuitous deflections. The defeat leaves the Blues still winless this season and facing a long struggle to keep their heads above water in Division Two.

It was another deeply disappointing afternoon for the 2s, following on from their shellacking in the Old Boys Cup last weekend at the hands of the Old Owens. There was nothing to fault in the determination or preparation however, a strong squad of fourteen was named, including a season debut for OIlie Curry and OHAFC 2nd XI League debuts for substitutes Rory Miller and Calum Butler – Rory had featured in a 2s pre-season friendly and Calum turned out for the Vets – both players coming off the bench in the second half. Harry Woolley was fit to start having recovered from a tight hamstring and there was another season debut between the sticks, David Griffiths becoming the side’s fourth goalkeeper used this campaign in only seven matches.

Although this was nominally Johnians’ home fixture, it was, in reality, a first home game of the season for the OHAFC, the largely immaculate Phil pitches a welcome sight following a lengthy spell traipsing round the M25 to a variety of grounds. As usual at this time of year, a strong wind was blowing towards the Alcock Pavilion and the Blues were forced to play into it in the first half.

This proved troublesome, with Griffiths’ goalkicks struggling to reach the halfway line and inviting constant pressure on the Harrow goal. In contrast, the Johnians’ keeper, who turned in an immaculate performance, seemed to enjoy himself almost too much, firing clearances straight over everyone and through to his opposite number on several occasions.

But when the visitors did get the ball down and play they did so purposefully and precisely. They possessed a number of strong, quick players all capable of switching possession and although the Harrow goal remained relatively untested in the opening half an hour, the fifteen minutes prior to the break proved decisive, Johnians taking a 3-0 lead in some style. The first goal saw the ball switched from right to left before a lay-off on the edge of the box saw a perfect first-time finish low into the far corner. Five minutes later the lead was doubled courtesy of another excellent move, the final pass inside Will Monroe at left-back took out the entire Harrow back four and allowed a simple run in on goal and finish. There was no denying the quality of the finish for number three either, a cross from the Johnians left was superbly headed in on the turn by the striker, who used the pace of the pass to deflect the ball back over Griffiths’ head and into the far corner.

Going forwards similarly proved a struggle for the home side, with David and Andres Hutchinson out wide seeing a decent amount of the ball but unable to weave their magic sufficiently to breach a well-organised back four. The Blues played well in pockets, but could never manage to build up any sustained pressure on the Johnians defence. With the wind now behind them in the second half, there was optimism at the break that an early goal could yet plant a seed of doubt in the visitors’ minds. Disappointingly, there was to be no repeat of the kicking struggles endured by Griffiths, as the Johnians keeper somehow continued to launch absolute bombs into the wind, helping clear the defensive lines.

Again, the OHAFC enjoyed spells in the ascendency but continued to be frustrated in their attempts to claw their way back into the game, crosses and shots continuing to lack the requisite accuracy and venom.

The result was put beyond doubt midway through the half with a couple of fortunate Johnians goals. A cross from the left was heading harmlessly towards the Harrow back four until a deflection took it perfectly into the corridor of uncertainty on the six yard box allowing a simple tap-in. The fifth goal was even more outrageous, as this time a cross from the right was deflected from the tightest of angles over a stranded Griffiths and somehow inside the far post.

Rory Miller and Calum Butler were introduced for the closing stages and both players acquitted themselves well, albeit in a lost cause, the visitors seeing out the final moments in relative comfort to claim a fourth win in five League games this season.

A tough afternoon for the OHAFC, who remain eighth in the table, and things aren’t about to get any easier with the visit of leaders the Old Carthusians 2s to the Hill next weekend. The Blues need to keep plugging away and rediscover their mojo, standards in Division Two have clearly risen this season and every single point is going to have be scrapped for.