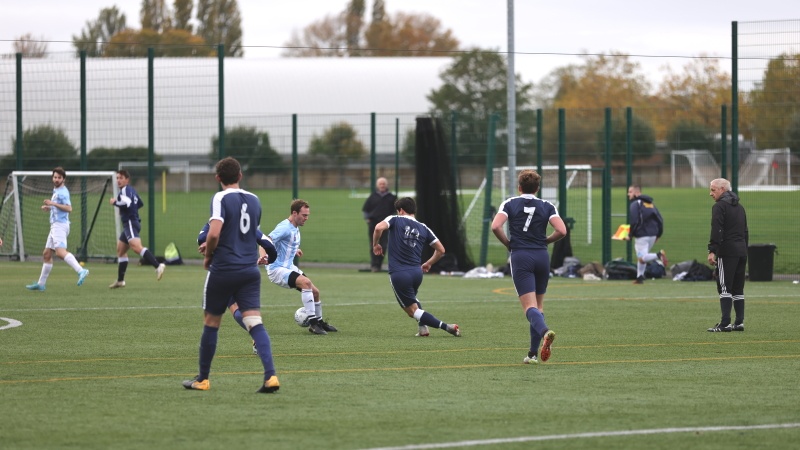 The OHAFC 3rd XI held their own against an undefeated Old Shirburnians side for over an hour on Saturday before finally succumbing 3-1 on the Kings House astroturf on Saturday, consigning the Blues to their fourth defeat of the season and leaving the side just one point and one place off the bottom of the Division Four table.

It was tough luck on Ed Nicholson and his men after a battling display that offered hope a throughout that an unlikely point or three could be secured. Indeed, the visitors started the better of the two sides, hugely surprising given the 10am kick-off and the propensity for most Old Harrovians to only fully function once midday has chimed. Tritton and Nicholson looked secure at the back, the midfield trio of Buckley, Roberts and Gairard enjoyed the better of things in the middle of the pitch and Ade Omisore carried a decent threat up front, at one stage twisting and turning past several Shirburnian defenders only to lose out with just the last man to beat.

There was one hair-raising moment in the Harrow goal, however, when a terrible clearance from keeper Tom Mitchell fell straight to a Shirburnian player ten yards outside the box. The attempted chip was sound in thought but poor in execution, allowing the retreating Mitchell to leap up and safely snatch it.

As the half wore on, the hosts began to enjoy a lot more of the ball and the OHAFC found themselves marooned inside their own half for lengthy spells. A couple of crosses were well defended, as were the subsequent corners, with a decent long-range effort also sailing just over the bar. As Shirburnian pressure mounted, a goal seemed inevitable, but, surprisingly, it was the visitors who scored it, totally against the run of play. The ball was fed to Will Glover on the right wing, who until that moment had been kept on the periphery of the action. Head down, he stormed down the line, outpacing one man before driving past a second to the byline. With men waiting inside the box for a cross, he drilled the ball low to the near post and got rather lucky, a Shirburnian defender inadvertently deflecting it towards the goal where it struck the keeper squarely on the chest and ricocheted into the top corner.

Undeterred by this setback, the visitors continued to apply pressure up to the break, the Harrow lead only remaining intact thanks to a superb save from Mitchell, who atoned for his earlier mistake in style.

The one clear instruction at the break was to keep things tight and not allow the Shirburnians an easy way back into the match, but this was undone almost immediately following the restart when substitute Mikey Watford conceded a soft penalty just a few minutes into the half.

The second half then followed the pattern of the first, with the hosts enjoying the majority of the ball but struggling to break down a stubborn Harrow rearguard. As the game edge towards the final half-hour, hope remained that an unlikely point could yet be salvaged.

But that was undone when Shirburnians broke upfield to snatch the lead with twenty-five minutes remaining and a third, a simple tap-in following a move through the middle of the pitch, sealed the points with ten minutes left.

It was tough luck on the visitors, who battled gamely throughout against a side that look destined for promotion at this early stage of the season. Although the tests keep on coming for the 3s, with the visit of league leaders the Old Alleynians 3s to the Hill next Saturday. The sides have already met this season, Alleynians running out 6-3 winners down in Dulwich.