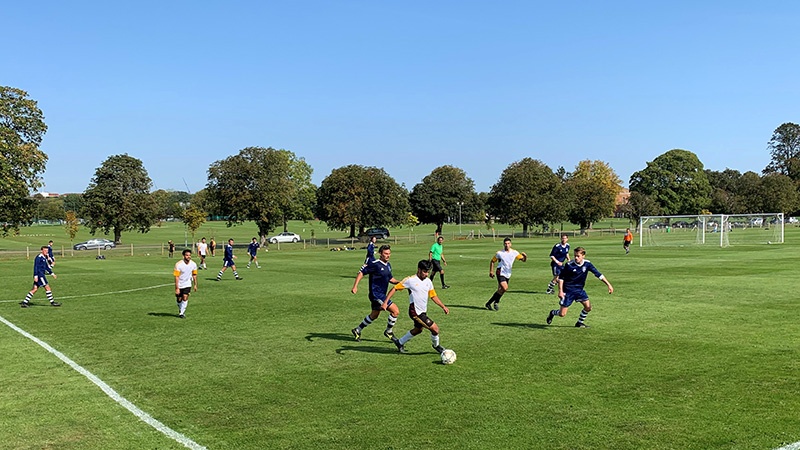 The OHAFC 2nd XI suffered their first defeat of the season on Saturday when they fell 2-0 to the surprise early leaders in Division Two, Old Merchant Taylors. The visitors weren’t helped by a couple of injuries to key players Geoff Taunton-Collins and Andres Hutchinson within the space of five first half minutes. Taylors scored either side of the break, with the OHAFC missing a couple of gilt-edged chances in between on a day when nothing seemed to go right.

Despite being forced onto the pitches across the road from the main grounds, the excellent early autumn weather meant that there was little to complain about, with the sun shining and the playing surface in fine fettle, albeit with the noticeable slope running from the far side down towards the school still present.

The visitors welcomed back last season’s star performer Andy Hutchinson, with Jack Dolbey occupying the opposite flank. A debut was handed to striker Will Glover, who confidently proclaimed himself to be the possessor of ‘plenty of gas’ in the warm-up – modern day slang for speed. Alex Ellis, who began the game alongside Pablo Hutchinson on the bench, was hoping for a rather more enjoyable experience than the 12-0 hammering suffered by the 3s the previous week.

The visitors began confidently, in stark contrast to the opening day fixture at Chigwell. Looking quicker and hungrier than their rivals, the Blues saw plenty of the ball and attempted to work their way up the pitch. Admittedly, it was a struggle bringing wide players Hutchinson and Dolbey into the game, whilst new boy Glover showed plenty of early endeavour without ever receiving any high-quality service.

But after a promising opening ten minutes, the nature of the match turned significantly in Taylors’ favour as they rather suddenly adopted a fast, high press deep inside the Harrow half. Having previously enjoyed time on the ball, the OHAFC defence and midfield were suddenly closed down right across the pitch, leading to some hurried clearances and several worrying moments when possession was lost in dangerous areas. The longer the half progressed, the more effectively the tactic worked, with the Blues unable to work their way out of their half and unwilling to simply lump it long. It was hardly surprising that yet another pass out from the back under pressure was intercepted and seconds later the ball was in the back of the Harrow net.

Fortunately, and probably unsurprisingly, Taylors proved unable to maintain this high-tempo workrate until the break, the OHAFC steadily regrouping without really suggesting an equaliser was imminent. But the key passage of the game then followed, handing Taylors a significant boost.

Harrow woes began with Andy Hutchinson straining his quad and being forced to leave the game, Ellis coming on as his replacement. Despite the required reshuffle, the visitors then strung together an excellent passage of play, manoeuvring the ball from their own half via all three midfielders to the edge of the Taylors box. All the defenders had been pulled over to the near side, allowing Lederman the simple task of rolling the ball into the path of the onrushing Taunton-Collins. The Harrow skipper sprinted into the penalty area and, with just the keeper to beat, prepared to apply the coup de grace. Agonisingly, he caught his studs in the turf and tumbled to the ground without ever making contact with the ball. Play continued momentarily, but it was quickly apparent that the player was in some pain and he duly had to be helped off the field, unable to put much weight on his right knee. Pablo Hutchinson, struggling slightly with an ankle sprain, was his replacement, the OHAFC now shorn of their two quickest threats and still trailing 1-0.

One of the Taylors’ centre-backs generously gave the Harrow skipper a brief medical check at the break, pronouncing the injury a minor ligament strain but severe enough to ensure a return to action was impossible. The growing swelling to the side of the knee suggested as much. Instead, Taunton-Collins urged his men on from the side, with the quality of the Harrow passing under the microscope after the break.

With a slight breeze behind them, the Blues again began well, enjoying plenty of possession and keeping the majority of the game in the Taylors half. Perhaps understandably given the reshuffle in personnel and the lack of pace in attacking positions, the Blues struggled to create many chances of note. Nevertheless, Jack Dolbey gamely took on the opponents’ back four, charging forwards with his usual stoic determination.

And, once again, it was a brief spell midway through the half that proved ultimately decisive in determining the outcome of the match, with the Blues squandering two golden chances to draw level, before watching in horror as Taylors marched straight up the other end to double their lead.

It was unsurprising that Dolbey was at the heart of the action. The first chance he created almost single-handedly, bundling past several challenges on the edge of the box to leave himself with just the keeper to beat, before delaying his shot fractionally long enough to allow a last-ditch tackle to deflect the ball to safety.

More good work from the left-winger then teed up Glover in an even more promising position, again with just the keeper to beat. This time the striker got his shot off in plenty of time, only to fire narrowly wide of the far post.

As so often happens in football, a series of missed chances is quickly punished at the other end and so it proved once again, Taylors carving their way through the Harrow midfield moments later, the ball landing at the feet of a striker just inside the box and his low drive squirmed agonisingly under the body of keeper Kyri Pittalis.

At 2-0 with less than half an hour remaining, the game was up for the Blues, although to their credit they continued to battle until the end, the lack of a cutting edge hampering any thoughts of an unlikely comeback. With both injured players now set to be out for some time, the prospect of a trip to Eton next Saturday now becomes even more daunting than usual.