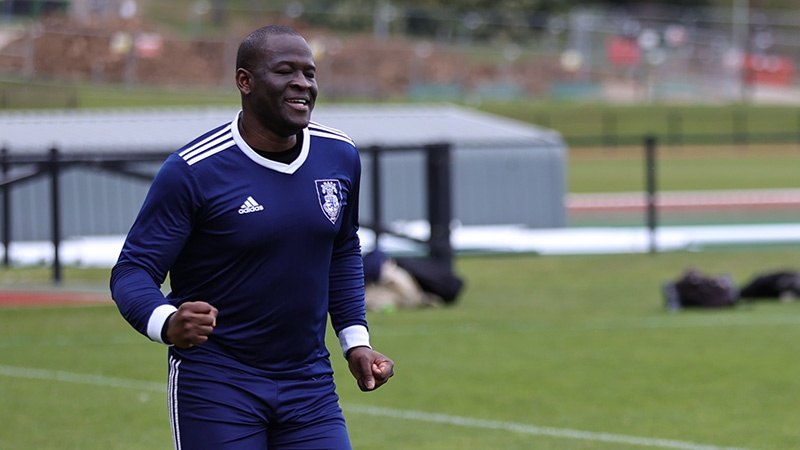 The OHAFC 2nd XI returned to action for the first time in 2021 with a narrow 3-2 home defeat to the Old Columbans in the Junior League Cup on Saturday afternoon. Ultimately, however, the loss will not prove terminal to the side’s hopes of progressing further in the competition, with the subsequent announcement from the League that the initial plan for a group stage to take place was to be scrapped, replaced from next week with a straightforward knockout competition. In a quirky twist of fate, the Blues have now been drawn to face the side they had originally knocked out in the first round in their last game prior to lockdown, the Old Suttonians.

Saturday’s encounter with the feisty Columbans, whilst now consigned to meaningless status, was nonetheless memorable for several reasons, primarily the sheer joy for both sides of being able to meet up again, see their teammates and enjoy a competitive game of football on the pristine Park Lake pitch on the southern side of the Hill. The OHAFC were able to name a strong lineup, with only skipper Geoff Taunton-Collins and the two elder statesmen of the squad, David Lederman and Harry Woolley, missing from the list.

The Blues looked rusty for the first hour of the game, against an energetic Columbans side who appeared to have taken their lockdown training regimes rather more seriously than the hosts. The visitors scored in the opening minutes of both halves, the first via a run down the right and a close-range finish after Walsh had parried the initial cross, the second from a ball down the inside left channel that ended with the striker poking the ball through the keeper’s legs.

The Harrow stopper was a busy man, keeping his side in the game on the half-hour mark with a fairly comfortable save from the spot, Will Monroe having been penalised for a trip inside the box. A shaft of light appeared soon afterwards when the Columbans were reduced to ten men for ten minutes, a midfielder sent to the sin bin for bending the ear of referee George Patriche once too often. A half-chance materialised for the hosts almost immediately, Pablo Hutchinson feeding Tristan David down the left but he could only drill his shot over the bar from a tight angle. In fact, it was the Columbans who came closest to scoring just prior to the break, a curling effort from just inside the box following a corner beat Walsh but bounced back off the underside of the bar.

The initial stages of the second half suggested the Blues were fighting an uphill battle, starved of possession and unable to create even the resemblance of a chance. When the Columbans added a third on the hour mark, the striker stealing possession on the right before running through and coolly flicking the ball over Walsh at the near post, the result looked a foregone conclusion.

But with twenty minutes remaining the Blues suddenly awoke from their lockdown-induced slumbers and began to take the game to their startled opponents. Will Monroe atoned for his penalty mishap with a splendid goal, his low, driven strike from the edge of the box taking a slight deflection on its way into the bottom corner. Moments later, Hutchinson fed Soyinka down the left and he planted a perfect curling effort into the far top corner to make it 3-2. That goal also marked Gbeminiyi’s 100th strike for the club since stats began at the start of the 2009/10 season – a superb achievement that is unlikely to be matched for some time.

With just under ten minutes remaining, what had appeared a comfortable stroll for the Columbans was now anything but, the hosts reinvigorated in their belief and driving forwards at every opportunity. They would create one final, glorious chance to equalise, Tristan David being fed through the middle with just the keeper to beat, but he failed to control his shot, lobbing the ball over the opponent, but comfortably over the crossbar too.

Plenty of encouragement to take from the final half hour for the Blues, and some relief that the defeat has not ended their hopes of progressing in the Cup. Last season they reached the semi-final stage only to lose to the Columbans in the last minute. Should the Blues win their next couple of ties, starting with the Suttonians this weekend, their likely opponents in the last four this time would be…yes, the Old Columbans. For now though, the focus remains on Saturday’s upcoming game and celebrating a wonderful goalscoring milestone for one of the OHAFC’s all-time great strikers.