Buckley corners Habs as Blues hold on for victory 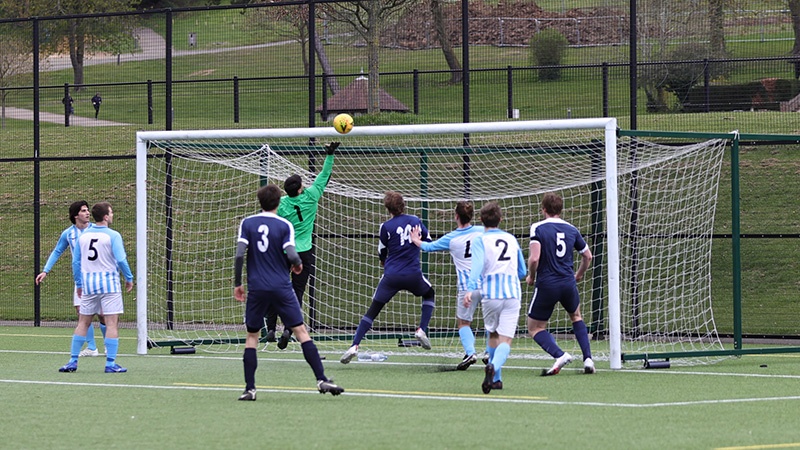 The OHAFC 3rd XI returned to action for the first time since December 12th and picked up where they left off, following up a 3-2 win over the Old Stoics on that occasion with a hard-fought 2-1 victory over the Old Haberdashers in the David Woolcott Trophy. Despite the fine performance, which saw the Blues come from a goal down to score twice and hang on courtesy of some heroic goalkeeping from Tom Mitchell, the result will, unfortunately, ultimately not count as the League have subsequently decided to change the format of the competition – the 3s must now travel to face the Stoics next weekend as the DWT reverts to a straightforward knockout competition.

Nevertheless, given the lengthy layoff over the winter months, it proved a highly encouraging ninety minutes for the Blues, who named a strong squad of fourteen for the fixture, including debutant Jose Linares.

The visitors, who sat third in Division Five North prior to the cancellation of the League season, earned a surprising 3-1 win over the Old Alleynians 3s last weekend and took advantage of some early slack OHAFC defending to open the scoring after twenty minutes.

The Blues responded well however, driven on by the powerful midfield trio of Ali Buckley, Charlie Lupton and Jamie Jordache, and they were rewarded for their endeavours with a fine equaliser ten minutes before the break, substitute Mikey Watford turning his man before feeding Arthur Blount to run on and beat the keeper with comparative ease.

The hosts held on well to the break as they came under renewed pressure from the Haberdashers, but regrouped after the interval to once more press forwards, Matt Bailey and Mikey Watford proving particularly effective. In truth, the Blues’ winner, which arrived with twenty minutes remaining, was slightly fortunate, Ali Buckley whipping a corner straight in to the far top corner following a flowing Harrow move. The Habs keeper stretched as high as he could, but the ball flew straight over him to the stunned delight of the home side. Buckley celebrated his fifth goal of the season, stretching his lead at the top of the OHAFC scoring charts.

The home side then came under serious pressure in the closing stages as Habs cranked up the tempo. Some heroic defending was required to maintain the advantage, with the Harrow back five on the limit. Colehan and Nicholson were booked, Tritton shredded his legs with some flying challenges, but the star of the show was keeper Tom Mitchell, who produced two world class saves in quick succession to prevent what seemed certain equalisers.

The hosts continued to threaten on the break, but spurned the half-chances that came their way to make the game safe. Charlie Lupton continued to drive forwards with boundless energy and Jose Linares enjoyed a strong debut off the bench.

Although the victory will ultimately count for nothing given the immediate change of format of the competition, the side can now look forwards to the first round proper against the Old Stoics next weekend with some confidence.