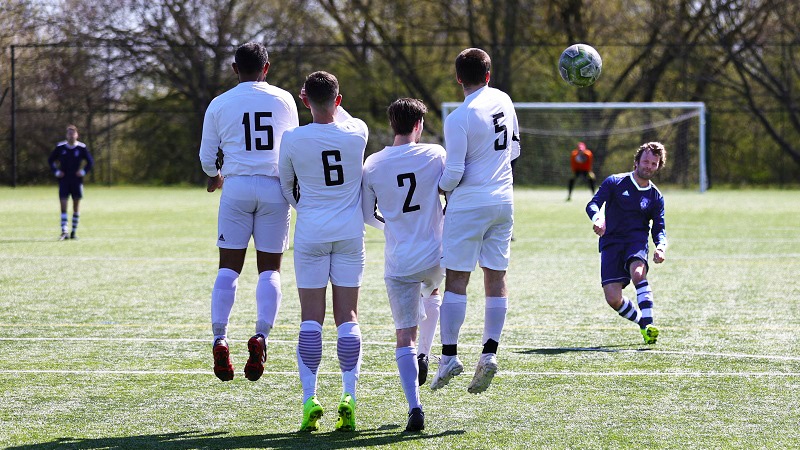 The OHAFC 2s produced arguably their best performance of this staccato season on Saturday afternoon, scoring five times on the Harrow School astroturf to ease past the Old Suttonians and into the quarter-finals of the Junior League Cup. Star of the show was undoubtedly midfielder jack Dolbey, who opened his scoring account for the club in spectacular fashion, firing in a superb hat-trick, with all three of his finishes finding the top corner. Less spectacular efforts from Max Curry and Doug Pratt completed the scoring and ensured a comfortable passage into the last eight.

It was a timely boost for Geoff Taunton-Collins' men, who feared their football for the season may have ended with last weekend's 3-2 defeat at home to the Old Colombans. But with certain sides failing to fulfil their group games, the Arthurian League decided to revert to a straight knockout competition, redrawing the remaining teams and handing the Blues a second JLC meeting with the Suttonians this season - the original first round tie between the teams had ended in a 3-2 win for the Blues back in December.

That game felt like a world away as the sides took to the pristine astroturf surface under glorious spring sunshine. It wasn't all plain sailing for the hosts, with Doug Pratt injuring his hip in the warm-up and being forced to start on the side as a precaution. An early hamstring strain suffered by winger Tristan David also saw him leave the game early, leaving the skipper with rather fewer options for rotation than he might have expected.

Nevertheless, following a fairly even and unremarkable opening twenty minutes, the home side gradually began to cause their opponents problems, especially down the left flank, with David, Dolbey and striker James Tippett all combining well. Dolbey, pushed further forwards than usual in a bid to press the opposition defenders with high intensity, gave notice of his abilities on the ball with a first-time effort that struck the outside of the near post following a well-worked move.

Five minutes later his finish was perfect, connecting sweetly with his trusty left foot to guide Will Payne's cross into the top corner. Having offered very little by way of an attacking threat, it was galling when the Suttonians levelled just seven minutes later, a swift counter through the middle ended with a cross from the right being headed in from close range past a static Harrow defence.

But the Blues retained their composure and stuck to their task, regaining the advantage a few minutes before the break courtesy of another pinpoint finish from Dolbey, this time picking out the opposite top corner with his right foot from just inside the box.

Five minutes into the second half Max Curry turned the ball in from close range following a corner from the left and the hosts had their two-goal advantage. It was a lead the side never looked likely to relinquish, with keeper Charlie Walsh forced into a couple of saves but little else. Doug Pratt, off the bench and able to play at what appeared full pelt, scored the fourth with another close range finish following a corner the Suttonians failed to clear and with a little over twenty minutes remaining the tie was settled.

There was still time for one final flourish and for Dolbey to seal his hat-trick with a fine free-kick, curling the ball over the Suttonians wall and into the top corner, the keeper left motionless. Perhaps understandably for a player who rarely finds himself in the limelight, his celebration was entirely memorable, ripping off his shirt, running over to the touchline and uttering a primordial roar of delight.

The Blues' reward for their victory appears to be a home quarter-final against Division Three side KCS Wimbledon 2s, although given the vagaries of the season at the current time that has yet to be confirmed. Whoever lies in wait in the next round, the OHAFC can go into the tie with confidence.