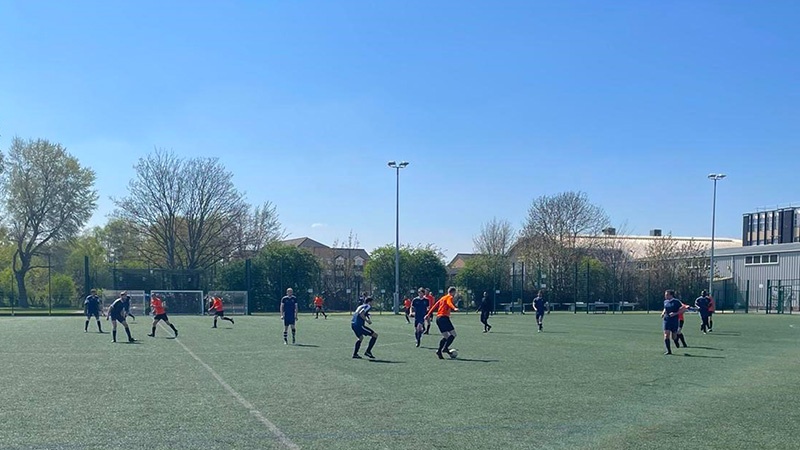 The OHAFC 3rd XI produced a stirring comeback on Saturday morning, away to the Old Eastbournians, to come from 2-0 down with a quarter of an hour remaining and force a penalty shootout which they duly won, Toby Colehan converting the fourth Harrow spot-kick to send the visitors into the semi-finals of the inaugural Gareth Dineen Trophy. Late goals from Kojo Frimpong and, surprisingly, 1s goalkeeper Fraser McGuinness, playing the second half on the left wing, earned the Blues their chance to progress from the shootout, the side must now wait to learn how the final ties in the competition will be played out.

With skipper Ed Nicholson away, keeper Tom Mitchell took the reins for the short trip to Southfields and the Aspire 3G pitch that is large in size but possibly requiring relaying in the next couple of seasons. The Blues played with the wind at their backs in the first half and took advantage to pin their opponents back, Olly Roberts looking especially threatening down the right wing. But the visitors couldn’t turn their territorial advantage into goals and were caught with a sucker punch after twenty minutes, conceding the first goal firmly against the run of play. A well-timed Eastbournian through-ball caught the Harrow back four in two minds as to whether push up or not and that allowed the striker to run through and finish past Mitchell.

Understandably, the goal rather took the wind from Harrow’s sails and the hosts began to dominate as the first half wore on. The Harrow skipper was forced into a couple of decent saves to keep the deficit at just one, turning one shot wide and tipping an awkward cross just over the bar. But shortly before the break, and from a very similar cross from the left, Mitchell this time failed to deal with the ball properly, fumbling under pressure to allow a simple tap-in for the Eastbournian striker.

At half-time McGuinness was introduced in an unfamiliar left wing role and the visitors pushed on into the wind, actually enjoying rather more possession than they had done before the break. With the Eastbournians looking for the third that would surely have killed the game, the match developed into an entertaining end-to-end affair, with both sides creating chances but unable to take them.

That was until a quarter of an hour remained and the first of two decisive interventions from Kojo Frimpong, who created Harrow’s first by driving past his marker and firing a shot on goal. Although the keeper kept the effort out, it was bundled over the line by McGuinness, who couldn’t believe his luck – his first, and quite possibly only, ever OHAFC goal falling to him on a plate a yard out.

The visitors sensed the fightback was on and with five minutes remaining were rewarded for their endeavours with the equaliser, a fine through-ball sending Frimpong racing through the middle and he made no mistake, firing into the bottom corner to send the tie to a penalty shootout.

The hosts won the toss and decided to take first, but immediately handed the advantage to their opponents when their first kick was fired wide. The Blues continued to convert successfully, Bailey, Lupton and Brooks all scoring. Mitchell then produced a couple of excellent saves and it was left to Toby Colehan to score Harrow’s decisive fourth, drilling the ball high down the middle of the goal to send the Blues through.

The next round of the competition is shrouded in mystery with three sides remaining: the OHAFC 3s, along with Merchant Taylors 2s and Lancing 2s - it remains to be seen how an overall winner will be produced.