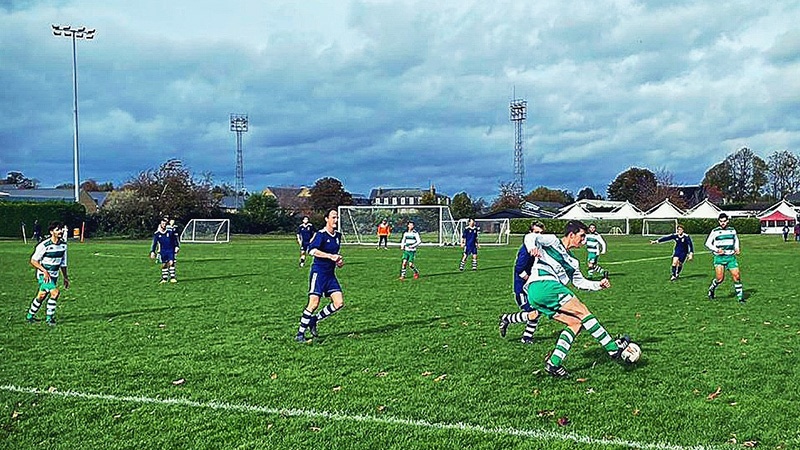 Despite producing one of their best performances in recent seasons, the OHAFC 2nd XI left Imber Court Sports Ground disappointed on Saturday afternoon, relinquishing a 3-1 lead late on to only draw 3-3 with the Old Johnians – a side that had thumped them 5-0 last season. A rocky start saw the visitors fall behind to an early set-piece. But a stirring comeback saw Jack Dolbey score twice before the break, and when Alexi Pittalis thumped in a rebound ten minutes into the second half a famous victory appeared on the cards. But despite having a player sinbinned for the final ten minutes, the hosts built concerted pressure on the Harrow goal and earned their rewards with an excellent second goal before snatching a point with just three minutes remaining – a long ball over the top saw a pacy attacker race through and plant the ball past Charlie Walsh. The Blues climb to seventh in the table with their first draw of the season.

There was a certain sense of trepidation as the OHAFC travelled down the A3 to Hampton and a first ever visit to Imber Court Sports Ground – home to the Metropolitan Police FC – to face one of the pre-season favourites for the Division Two title. On arrival, envious glances were cast in the direction of the excellent pitch the Southern League Premier Division side enjoy, with the Johnians’ home pitch on the other side of the grounds resembling not much more than a decent park surface.

The continuing absence of any recognised striker in the squad provided further food for thought, with midfielder Alexi Pittalis deemed the most suitable candidate to take up the reins. There was a first 2s appearance for centre-half Felix Orchard, who had played a couple of 1s games several seasons ago. He slotted in alongside Doug Pratt, with brother George returning to the midfield following an excellent display against the Aldenhamians last weekend. David Lederman passed a late fitness test on a groin strain, with Fabian Dobree, struggling from a similar problem, the only substitute.

Despite the Johnians having dropped some points rather unexpectedly so far this term, the pre-match fears of a tough game in tricky conditions proved absolutely correct in a torrid opening twenty minutes for the visitors. The hosts dominated possession, switching play down both flanks, with the visitors looking sluggish in comparison. A few long balls over the top gave the Harrow defence brief respite, but it was little surprise when Johnians opened the scoring – the only disappointment was that it came from the most basic of set-pieces. A free-kick forty yards out was curled to the back post and one of the tall defenders was left free to head powerfully past Walsh in the Harrow goal.

Further quick breaks saw a couple of efforts fly wide of the Harrow goal, several corners were forced and subsequently defended. The inescapable impression was that this could prove a long afternoon however, with the visitors having barely ventured into the attacking third. The one bright spot was the early showing of Felix Orchard, who possessed a calmness on the ball and in his decision-making that was palpably lacking from some of his teammates.

But as the half wore on, the Blues slowly began to fight their way back into the game. The catalyst for this owed much to an electric spell of wing play from Will Payne, who started to cause serious problems down the right hand side. With Ed Massey overcoming a few early mistakes and joining Payne in venturing forwards down the wing, the Johnians found themselves under growing pressure at the back. A couple of corners were forced, Callum Barrett fired in an excellent long-range strike that was well saved by the Johnians keeper. Belief grew in the Harrow ranks and it was little surprise when a further spell of attacking play down the right produced an equaliser. Payne, Massey and Lederman interchanged several times, Lederman cutting the ball back to the edge of the box only to see it cleared. But an almost identical move immediately produced another cross and this time the Blues made it count, George Pratt’s effort half-blocked allowing Dolbey to pounce ahead of Pittalis and smash the ball in from close range.

The hosts, who had perhaps been expecting a rather easier afternoon, were clearly shocked and began to argue amongst themselves and, increasingly, with the referee, who did well to maintain his cool under concerted protestations.

Meanwhile, the visitors continued to improve. There were still some nervy moments at the back, with Walsh coming out of his area to clear through-balls on several occasions – thankfully, his kicking remained strong throughout. Orchard and Pratt continued to read the game well, although perhaps over-played on a couple of occasions. But the game was far more even territorially and shortly before the break the OHAFC took the lead with a peach of a goal. Payne was the instigator, collecting the ball out wide, still some twenty yards outside the penalty area, before embarking on a slaloming run that carried him almost to the goal line. He kept his composure to pick out a square pass to Pittalis, who shielded the ball before laying it back for the arriving Dolbey to strike first time. It was by no means the cleanest shot ever struck, the ball bouncing into the turf, but it was perfectly placed, beating the Johnians keeper and landing inside the far post.

Despite the superb turnaround, the half-time team-talk emphasised the mountainous task still ahead, with a 45-mimute battle royale anticipated against a wounded Johnians side. Fabian Dobree was introduced off the bench, Tristan David making way.

The opening ten minutes of the second half were fairly even, with neither side able to create any chances of note. But a free-kick twenty-five yards out provided the visitors with a chance to extend their lead and they took it emphatically. George Pratt stepped up and drove a shot past the wall, the keeper could only parry and Alexi Pittalis showed excellent attacking instincts to follow in and smash the ball into the top corner from six yards out.

Suddenly the prospect of a famous win seemed not only possible, but highly likely. With the Johnians now furious at the situation they found themselves in, they rotated their side and pressed on. The next twenty minutes became a real slog for both teams, with the OHAFC penned back inside their half, but defending well, comfortably clearing any danger, albeit without managing to keep the ball for any length of time. Dobree’s groin gave up on him, forcing Tristan David back into the action on the left. As the clock ticked on, the hosts ramped up their pressure on the referee, appealing for literally anything and everything, no matter how desperate. A row then erupted when Doug Pratt, who had been cautioned in the first half for a foul, then brought down a Johnian inside the centre-circle. The green and white shirts swarmed round the match official pleading for a second yellow card, much to the annoyance of several Harrow players.

When a couple of very forceful but rather hopeful penalty appeals fell on deaf ears, one of the Johnians could take it no more, haranguing the referee once too often and being sent to the sin bin as a result. But any numerical advantage the Blues now enjoyed was immediately nullified when Lederman’s groin suddenly went, meaning he could only hobble around for the final quarter of an hour, his hobbling ability deemed superior to Dobree’s by skipper Geoff Taunton-Collins.

Pressure on the Harrow goal continued to mount, with Harrow clearances becoming ever more desperate. Walsh came into his own with a couple of superb saves to tip headers over the bar from close range, the Johnians unable to believe they had not manged to pull one back. As the game ticked into the final ten minutes, Harrow resistance was finally broken. A break in play saw slight hesitation from the visitors, with a quick free-kick fired out to the right wing. The wide player produced a superb cross that was headed in at the far post from almost on the goalline.

Unsurprisingly, this meant a grandstand finish with the hosts throwing everything they had in a bid to rescue an unlikely point. But the blue shirts stood firm, suddenly finding an outlet down the left with Tristan David carrying the ball into the corner on several occasions and so nearly scoring a fourth on the break following good work from Payne and Pittalis.

As the referee indicated the ninety minutes were up and only three minutes of additional time remained, the visitors seemed well set, the ball being scrapped over by the corner flag at the opposite end of the pitch. In a matter of ten seconds, Harrovian afternoons were shattered. The ball broke a few yards inside and was hammered downfield by one of the centre-halves. The clearance caught the breeze and sailed over the heads of the two centre-halves, who suddenly found themselves in a foot race with the quickest Johnians player. He drove down the middle past Pratt and Orchard into the box and managed to poke the ball through Walsh’s legs to spark wild celebrations.

It was cruel luck on the Blues, who had survived manfully through the preceding quarter of an hour of pressure, only to be undone by nothing more than a long hoof from the back. Nevertheless, having conceded two similar goals away to the Aldenhamians a week ago, there is clearly some work to be done defending such situations. Prior to the game, the visitors would undoubtedly have taken a point. This now felt like a defeat. Nevertheless, taken as a complete performance, the side could only be pleased with their efforts. The skipper spoke very well to his deflated men at the final whistle, stressing the need to continue to play with confidence when holding a lead and not to settle for just clearing the ball anywhere.