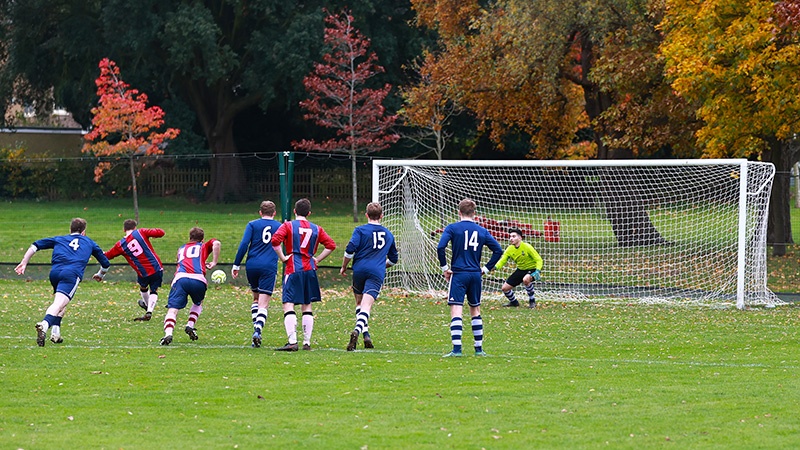 A combination of a disappointing performance and a healthy dollop of bad luck conspired to send the OHAFC 2s to their second heaviest loss of the season, the Old Carthusians 2s gaining revenge for the 3-1 defeat suffered on their own ground a month ago with a comfortable 5-0 win on the Hill on Saturday afternoon. Despite starting the game well, the Blues fell behind to a penalty midway through the first half and a fortunate second for the visitors soon afterwards left the home side with a mountain to climb. The pattern was repeated in the second half, with another penalty conceded and another deflected goal scored, the visitors scoring their one genuine goal of note ten minutes after the break. The Blues remain seventh in Division Two and are now afforded their first break of the season – probably no bad thing for the squad.

Having performed so well in the 3-3 draw away to Old Johnians a week previously, and with the return of striker Pablo Hutchinson to bolster the ranks, confidence was high that another positive result could be gained against the side the Blues deservedly beat 3-1 back in mid-October. On a cloudy day on the Hill, with Phil pitch 1 in decent condition (although perhaps in need of a fresh mow), this confidence appeared well-founded as the home side made most of the early running. Several times left-winger Tristan David found himself in space out wide, but the visitors managed to prevent any serious threats on their goal. Max Curry was his usual combustible self in midfield, doing his best to free the wide men – Will Payne, following his excellent showing against the Johnians, was perhaps underused in this opening spell.

The magenta shirts gradually grew into the game, their own pacey right winger an obvious threat but Ed Massey sticking to his task well to again limit any threat. Midway through the first half it became clear that this Charterhouse side possessed far more quality than on display in the previous meeting and two goals in quick succession turned the game squarely in their favour. Both goals had a touch of fortune about them. The first saw a ball played across the Harrow box and a forward drive towards the right. Doug Pratt stuck out a leg and barely caught the player and although he retained his balance and continued forwards, the inevitable penalty appeals rang out. Referee David Lea took a few seconds before pointing to the spot and the penalty was comfortably dispatched. Five minutes later a long ball over the top of the centre halves caused mild panic in the Harrow defence – something of a recurring theme in recent games – and the home side never got themselves set. As it was, it took a cruel deflection from a long-range shot to the send the ball looping over Hassan Hammad in the Harrow goal and the visitors were two goals to the good.

Concerned skipper Geoff Taunton-Collins responded by sending on David Lederman into midfield in a bid to restore some order to Harrow’s play and it nearly worked almost immediately, the veteran sending both Tristan David and Hutchinson away down the left but neither could outrun the Charterhouse defence. Despite the 2-0 scoreline at the break, there was still confidence that an improved second half display could yet get the hosts back into the game – the Carthusians deemed much improved but by no means unstoppable. Luca Pittalis was introduced into midfield with Grasso and Dolbey the men now sidelined.

But any hopes the home side had of forcing their way back into the game were all but extinguished with a third Charterhouse strike ten minutes into the half. This time it was a genuine goal from a high-class move that ended with a hard-hit shot that left Hammad with no chance.

The scoreline then took on a rather unfair look with yet another deflected shot, again from distance, that totally wrong-footed Hammad and another penalty – although unlike the first, this was a rather more blatant infringement, Ed David turning inadvertently and booting an opponent up into the air. An even better finish was applied, the ball being drilled just inside the post.

The home side huffed and puffed and enjoyed spells of possession in the Charterhouse half, but lacked the conviction needed to break their opponents down. Pablo Hutchinson came closest to scoring for the Blues with a far post header that sailed inches wide of the far post following an excellent corner delivery from Payne. Several promising breaks were snuffed out, the sight of Ed Massey smashing a forty-yard shot high into the trees beyond the goal perhaps highlighting the rather scruffy nature of the OHAFC display.

A disappointing afternoon for the 2s, who now enjoy a week off and a chance to recharge the batteries ahead of the trip to Eton the following week: the Etonians sit top of the table and smashed the Blues 11-0 on the opening weekend of the season. There should be no lack of motivation for the visitors on this occasion.