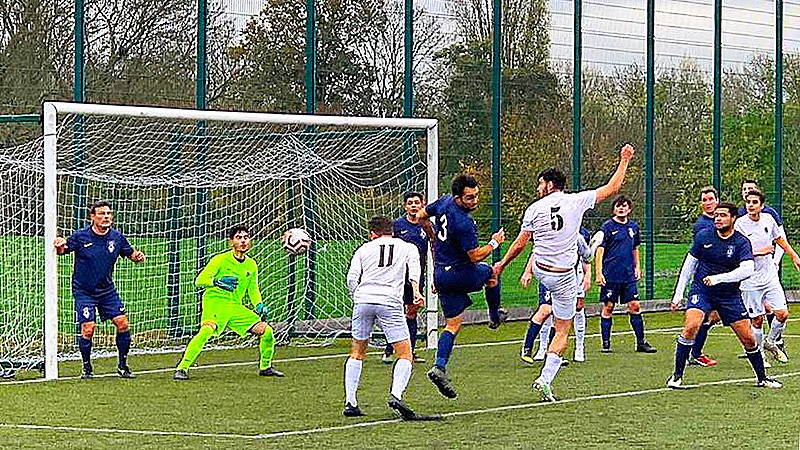 A makeshift OHAFC 1st XI containing no less than three goalkeepers, four 2nd XI players and a player who had barely played a game of football in his life were unsurprisingly thumped by a hungry, dominant Old Alleynians on the astroturf in Whitton on Saturday afternoon. Despite the embarrassing 11-1 scoreline, the XI representing the OHAFC actually gave a good account of themselves, almost levelling at 2-2 after half an hour before a flurry of goals either side of the break provided the scoreline with a more realistic appearance. The question now facing the Blues is not one of relegation – which is a certainty even with eleven fixtures remaining – but whether or not the season can be completed.

Such is the lack of commitment from the 1s at the moment, results are almost a foregone conclusion, with heavy defeat following heavy defeat. Saturday was a new low point, with the Blues making Manchester United’s problems seem rather quaint by comparison. Hassan Hammad lined up in goal for his 1s debut, with regular centre-backs Ed Beecham and Alex Ellis flanked by 2s keeper Kyri Pittalis at right-back and newcomer Will Blunt at left-back. It was incredibly generous of the youngster to give up his afternoon to help fill the eleven, but it was apparent within five minutes that he was up against the Alleynians’ star man, a quick, elusive winger, and a long afternoon was consequently in store. In midfield, George Gould was partnered by 2s veteran David Lederman – who became the oldest players to represent the senior team since records began in 2009 – and keeper David Griffiths – making his first OHAFC appearance of the season. There was a more familiar look to the front three with 1s regulars Dan Firoozan and Ed Corswarem out wide and striker Pedro Azagra – also making his 1s debut – up front.

The Blues started well enough, keeping their opponents at arm’s length for the first ten minutes, before the Alleynians began to turn the screw. The right winger was soon driving down the line before cutting inside and firing on goal and Hammad was beaten twice by efforts he had little chance with. Despite the one-sided nature of proceedings, the Blues continued to battle and the temperature was raised a couple of notches by a late challenge from Griffiths on the edge of the Harrow box. He escaped a booking, much to the Alleynians’ chagrin, and although the resulting shot was comfortably saved, the game suddenly took on a more competitive edge. The visitors enjoyed a spell of possession and soon it was an Alleynians player who was fortunate not to go in the book with a similarly poorly-timed challenge on the Harrow right.

As the game passed the half-hour mark, with the OHAFC still just about hanging on to the two-goal deficit, the expected stroll to victory was rudely interrupted by a Harrow goal: another decent spell of possession in the Alleynians half allowed Lederman to curl the ball into the box and Griffiths rose highest to send a looping header over the keeper and into the far top corner. The hosts were shocked and, amazingly, moments later it should have been 2-2 with the Blues’ best move of the game: Gould and Firoozan worked the ball well down the right, passed into the box and Azagra held it up well before backheeling across the area for Corswarem to run onto. With all the defenders having been drawn across, there was only the keeper to beat – disappointingly the ball was fired clean over the bar and a tantalising glimpse of parity was lost for good.

Minutes later the Alleynians regained their composure, and their two-goal advantage, with a well-worked move that saw a cross turned in from close range on the right and when another overhit delivery from the same side sailed high into the air only to land perfectly over Hammad’s head and into the back of the net, it was clear damage limitation was indeed the OHAFC’s remit for the afternoon.

Another goal just before the break made it 5-1 and a couple of quick strikes moments into the second half made it seven. At this stage any score seemed possible, but to the visitors’ credit they continued to battle to the end, against opponents who were keen to bolster their goal difference. Hammad produced a couple of excellent saves, Pittalis enjoyed a whole-hearted performance at right-back and Azagra battled away as best he could against the Alleynians back four. The final ten-goal deficit accurately reflected the difference between the quality and fitness of the two sides.

The 1s thankfully now have a break for a fortnight before a short trip down the A3 to face KCS Wimbledon in the first of two pre-Christmas fixtures. Hopefully these games will get played and the squad can regroup in the new year – the current depressing situation is totally unsustainable.