3s denied at the death by controversial equaliser 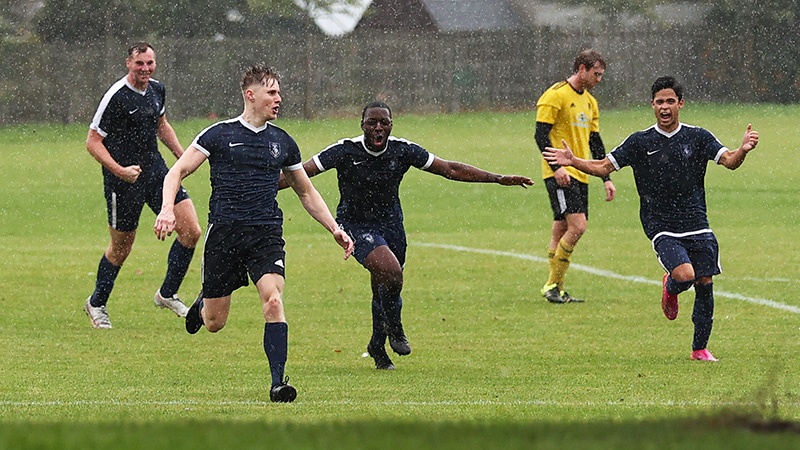 The OHAFC 3rd XI narrowly failed to match the 2s in their bid to record a first victory of the season when they were pegged back to a 2-2 draw by the Old Wellingtonians in disappointing fashion on Saturday afternoon. The Blues fought back strongly from a half-time deficit to lead 2-1 with just moments to go, but a hotly-contested effort from the visitors was allowed to stand and the OHAFC had to settle for a point.

Despite the late setback, this was another highly encouraging display from skipper Ed Nicholson’s men. A late warm-up didn’t help matters, with the Blues clearly under-cooked at kick-off. The Wellingtonians, who had hitherto failed to win a point this season, took advantage, pushing forwards and looking threatening. The home side did well to maintain parity in these early stages, but as the half wore on, so the Blues’ raised their level, Dan Graham, playing his first game of the season, and Mikey Watford leading the charge.

It was galling, therefore, that the visitors opened the scoring during this spell, Ollie Roberts losing the ball in midfield and watching in horror as his defence’s high line allowed a clear run on goal from the opposition striker. Offside appeals were ignored and the OHAFC were 1-0 down.

Half-time saw the skipper ring the changes, with Ali Buckley, Jake Speed and Khalil Baoku all coming on. And as the weather condition worsened, the OHAFC began to click through the gears, putting their opponents under considerable pressure. Lupton, Roberts and Atkinson dominated midfield and it seemed just a matter of time before the equaliser arrived. It duly did so just after the hour mark with all three substitutes involved. Speed fed Baoku through the middle and as he prepared to shoot, was felled from behind, referee Tony Anderson pointing to the spot. Ali Buckley stepped up confidently but his penalty was a weak one, straight down the middle and comfortably saved by the keeper. Fortunately, the Harrow man was alert to the rebound and somehow managed to scuff it in to draw the sides level.

And a second set-piece, twelve minutes from time, saw the home side deservedly take the lead: Lupton delivered a free-kick into the box and Jake Speed was on hand at the far post to turn the ball in, celebrating in spectacular fashion to the delight of his teammates.

At this stage, a first win of the season seemed inevitable, but the home side had to endure a nervy final ten minutes as renewed Wellington efforts and a surprising sense of complacency from the home side allowed the visitors to threaten. Some stoic defending from the back four and keeper Tom Mitchell so nearly got the job done…until the final denouement and the desperately unfortunate equaliser – a shot turned in from close range that the hosts felt was clearly offside.

Despite the disappointment, a first point of the season and another encouraging display from the 3s, who next week welcome the Old King’s Scholars to the Hill.