OHAFC 2s deservedly collect their first win of the season 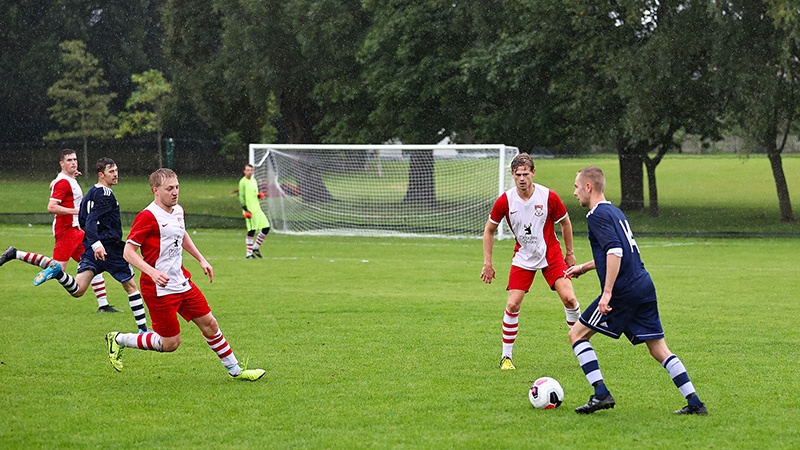 Eleven games and 580 days later, the OHAFC 2nd XI once more tasted victory in an Arthurian League Division Two fixture with a hard-fought but fully deserved 2-1 win at home to the Old Radleians on a wet and windy Harrow Hill on Saturday afternoon. The hosts made the perfect start when Charlie Stebbings scored inside the first thirty seconds and the Blues created further chances to extend their lead before being pegged back via an unfortunate own goal from Alexi Pittalis just before the break. As the wind and rain began to lash down, the second half turned into a real scrap with both sides struggling to find an opening. That was until Jack Dolbey was tripped inside the box and Jamie Jordache stepped up to confidently fire home the spot-kick. The win moves the 2s up a place into ninth in the table.

With players continuing to return to action following the summer break, it was still fairly remarkable that only three of the previous weekend’s starting XI that narrowly lost to the Old Alleynians 2s started here: keeper Kyri Pittalis, left-back Callum Barrett and winger Jack Alhadeff. There were season debuts for Doug Pratt, Alexi Pittalis, Jack Dolbey and Charlie Stebbings, with veteran David Lederman now fully recovered from his recent illness and, hopefully, a niggling calf strain. Youngsters Luca Pittalis and Miles Kellock started on the bench.

Following a couple of disappointing defeats, this home game against the Radleians presented Geoff Taunton-Collins’ men with the perfect opportunity to kickstart the season. A thorough warm-up was followed by a lengthy tactical run-through, including various pressing scenarios, which paid immediate dividends, as straight from the Radley kick-off blue shirts pushed forwards in unison, hurrying the back four into a careless square pass that Charlie Stebbings seized upon, taking a couple of touches into the area before slotting the ball into the far corner in his customary calm manner. Unofficial sources timed the goal at barely 25 seconds – surely one of the fastest goals ever scored in OHAFC history.

Understandably, the hosts’ confidence surged with the early lead and they set about their opponents full of energy. Nobody epitomised this more than right winger Will Payne, who drove at his man time and time again, with plenty of assistance from right-back Jamie Jordache. The pair successfully overloaded the Radley left on several occasions, creating one glorious chance for Jack Alhadeff, who should have scored but planted his right-foot shot narrowly wide of the near post.

The home side also carried a real threat from set-pieces, with Lederman delivering a variety of crosses from corners and free-kicks. Both Alexi Pittalis and Charlie Stebbings came close to scoring with headers, the Radleians just about staying in the game.

There was an unusual stoppage midway through the half, when Lederman pointed out to the referee that one Radleian was clearly playing without any shinpads, his socks inconspicuously rolled right down to his ankles. Bizarrely, some of his teammates questioned why this was important, but it meant that for ten minutes the visitors were down to ten men whilst a solution was found. Unsurprisingly during this spell, Kyri Pittalis had little to deal with in the Harrow goal other than a few corners. But with half-time approaching, and the hosts seemingly in command, a further set-piece gifted the visitors a way back into the game. A free-kick from the Radley right was whipped in low towards the near post and, despite a loud shout of ‘Keeper’s’ from his older brother, Alexi Pittalis snaked out a leg to try to clear only to divert the ball inside the near post. It was tough luck on the Harrow side, who clearly deserved a half-time lead.

Skipper Geoff Taunton-Collins shuffled his pack with both Luca Pittalis and Miles Kellock introduced for their first taste of the action. Disappointingly, however, the second half proved as scrappy and dull as the first half had been free-flowing and enjoyable. The weather conditions certainly played a part, with driving rain and a stiffening breeze hampering both sides’ efforts to get the ball down and play cohesively.

The hosts were not helped in their efforts with injuries to two players in quick succession, Alex Ellis tweaking a hamstring moments before Lederman was forced off, his calf once more troubling him. Barely two minutes after the veteran had left the field of play, he was almost being urged back on, as the home side were awarded a vital penalty, Jack Dolbey being mauled down from behind. As it turned out, Jamie Jordache took command, confidently grabbing the ball and stepping up to fire home straight down the middle.

With just over twenty minutes remaining, the Blues battled against the opposition and the elements in a bid to secure a valuable win. And they did so despite one almighty scare when the Radleians pieced together one of their few notable moves of the game, building down the right before crossing into the box. Unselfishly, the striker eschewed the opportunity to shoot, slipping in a teammate on the left. This hesitation proved crucial, allowing Kyri Pittalis to race off his line and thwart the eventual shot with a perfectly-timed dive.

The hosts saw out the remainder of the game without further alarm, registering their first win of the season, and a first ever win against the Old Radleians in Division Two. It was an excellent effort from all thirteen players on the day and with further regulars set to return in the next fortnight, the side can look forward with optimism to the challenges that lie ahead, starting with a tricky trip to the Old Merchant Taylors, the current division leaders, next weekend.