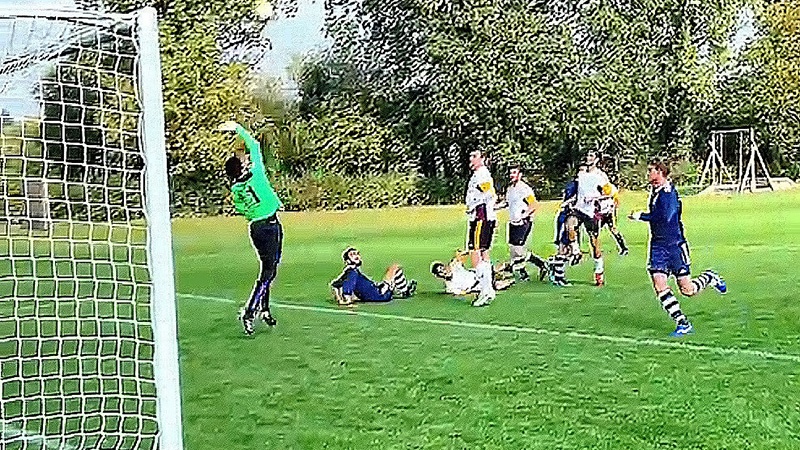 Somewhat infuriatingly, the OHAFC 2nd XI produced comfortably their best performance of the season, an almost flawless display, yet still came away empty-handed following a 2-1 defeat at League leaders Old Merchant Taylors on Saturday afternoon. The overriding sense of disappointment at the result was tempered by the knowledge that further performances of this quality from the Blues should stand them in good stead in the months ahead.

A strong squad of twelve included a welcome season debut for forward Pablo Hutchinson, fresh from completing an ironman triathlon in Barcelona, and Jesse Duah as the lone substitute – the youngster arrived at the ground with a nasty looking graze on his hand following a tumble off his bike on the way. The only question was who would don the gloves in goal, with regulars Kyri Pittalis and Charlie Walsh – who was spending the weekend with his new fiancée – both absent. In the end, the only person remotely confident of performing the role was David Lederman, the veteran having kept four times last season for the over-35s. And as luck would have it, a quick trip to Westfield late on Friday night had seen him arrive in Northwood well prepared, a shiny new pair of Predator gloves just begging to be tested.

Taylors had enjoyed a perfect start to the season, with three comfortable wins coming from three games, including a demolition of the Old Radleians, whom the OHAFC had only scraped past last weekend. But any initial caution from the visitors, understandable as it may have been, was quickly dispelled in a powerful opening twenty minutes that saw the Blues swarming all over their opponents high up the pitch. Time and again Taylors were harried into mistakes, the 2s looking especially threatening down the right with Hutchinson, Dolbey and striker Max Curry all enjoying plenty of possession. Several crosses were delivered into the box, a couple of shots flew just wide, a goal seemed inevitable.

The hosts appeared shocked by the early onslaught, perhaps a pre-match glance at the Division Two table suggesting this would be a stroll in the autumn sunshine for them. But the tenacity of the Harrow tackling soon provoked a reaction, not helped when a stray boot from Alexi Pittalis left one of the Taylors defenders hobbling off with what looked a serious knee injury. Once play resumed, the visitors continued to dominate, so nearly opening the scoring when a Tristan David cross from the left was headed back across goal from Pablo Hutchinson, only for the Taylors keeper to make a magnificent save, arresting his natural momentum quickly enough to spring in the opposite direction and palm the ball past the post at full stretch. At the other end, it had been plain sailing, with the two full-backs Callum Barrett and Ed Massey sticking fervently to the dangerous wide players and Woolley and Ward their usual composed selves in the middle. To this point, Lederman may as well have been wearing boxing gloves, such was the paucity of Taylor’s threat.

But the visitors’ serene state of dominance was suddenly smashed in dreadful fashion with a couple of errors gifting the hosts an ill-deserved lead. A tame shot flew well wide for a Harrow goal kick. Lederman played the ball short to Ward, who in turn fed Grasso in midfield. The youngster, who has impressed in his couple of appearances so far this season, was caught in two minds and under pressure from an opponent delivered a poor pass straight to the Taylors wide man. He cut in on goal and produced a decent enough shot from a narrow angle, but Lederman also failed to decide what to do, half-saving the effort rather than punching, allowing the ball to spill across goal for a simple tap-in from another midfielder.

Understandably, the goal rocked the visitors and their play lost much of its fluency. Taylors began to threaten out wide but Massey and Barrett stuck to their guns, with some well-timed challenges, and any resulting corners were comfortably dealt with. Unfortunately, at the other end, the Taylors keeper continued to handle everything with consummate ease, snuffing out further Harrow crosses into the box.

There was, understandably, considerable optimism at the break that a Harrow victory could be procured if the performance levels of the opening half an hour were replicated. But it was the home side who seized the initiative, producing possibly their best spell of the game with some neat passing across the front of the Harrow penalty area. Again, Lederman remained untested in goal, but a well-worked move ten minutes into the half cut the Harrow back four open down their left and the wide man raced through to fire in across goal to double the home side’s lead.

The reaction from the Blues was immediate and impressive, and for much of the remainder of the half the OHAFC found themselves camped in Taylors half. Numerous balls forwards found an increasingly threatening David down the left, with Duah and Massey combining well down the right. Max Curry was a constant thorn in the opposition’s side and he so nearly scored a wonderful goal, flicking the ball over a couple of opponents on the run, only to slightly underhit the final attempted lob over the keeper, allowing the save to be made.

Indeed, the only thing lacking from the Harrow performance was the finishing touch, with several headers flying just wide or being tipped over by the Taylors keeper – arguably their best player on the day. As time ticked on, it appeared as though this just wouldn’t be Harrow’s day. But a free-kick on the right, which caused Jesse Duah to leave the field suffering from dizziness, was wickedly swung in by Tristan David towards the far post. The ball continued unmolested on its path and nestled inside the far post, even the Taylors keeper unable to react in time.

The visitors had just over ten minutes to find an equaliser and threw everything they had at their opponents, with both Alexi Pittalis and Jack Dolbey coming within inches of completing the comeback. A final shot that flew inches wide of the post saw most of the team sink to the ground in disbelief, ultimately confirming that this, indeed, was just not their day.

Plenty of positives to take from this performance however and an enticing fixture up next, with a trip to a struggling Carthusian 2s down in Godalming to contend with. For the first time in a long, long time, the OHAFC may just consider themselves favourites.