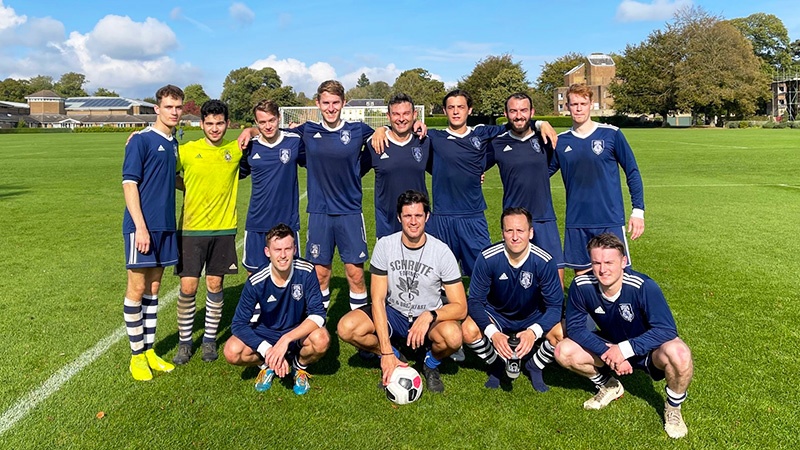 The OHAFC 2nd XI continued their recent upward trajectory with a historic first ever League victory against the Old Carthusians 2nd XI. Not only was the deserved 3-1 win a first ever for the OHAFC 2s, it was also a first for the club over their long-time rivals since way back in January 2012, when the 1st XI recorded a 2-1 win in the Premier Division. Two first-half goals from Man of the Match Miles Kellock sandwiched an effort from debutant Pedro Azagra and gave the visitors a deserved lead at the break. The hosts threw everything at the Blues at the start of the second half and the visitors were indebted to a couple of superb saves from another debutant, keeper Hassan Hammad, to maintain the three-goal advantage. In the closing stages the Blues missed several golden opportunities to increase their lead, but the Carthusians had the last word, scoring from a corner with five minutes remaining.

Despite the fact that the Carthusians 2s and 3s are clearly shadows of their former selves – neither side had won a point from three League fixture prior to the weekend – Saturday’s result is an important one for the OHAFC. A poor start to the season has slowly given way to signs of optimism, even though the visitors went into this fixture just three points and one place above their opponents. Last time out the side were highly unfortunate to leave Merchant Taylors with a 2-1 defeat, despite having been the better side for the majority of the game, but a win here was vital to cement the growing self-belief and ensure the side remain firmly on track in their mission to climb the table.

Conditions at Charterhouse School were absolutely perfect, with a beautiful pitch, slick with morning dew, warm sun and hardly a breath of wind. The only slightly disappointing factor was the lack of a referee, which meant Blues’ skipper Geoff Taunton-Collins having to officiate the first half. And the game had barely sprung into life when a lengthy stoppage was required, OHAFC right-back Ed Massey suffering a broken nose in a fairly innocuous collision under a bouncing ball. Despite feeling able to continue, the steady trickle of blood and immediate swelling suggested that was never going to be an option. Edmund trotted off to the medical centre, meaning an early introduction into the action for substitute Pedro Azagra. He slotted in up front, with Will Monroe, who later admitted to not really having a clue what he was doing up there, moving to his favoured position of right-back.

Once the game resumed, it was the visitors who took control, the high press that had proved so successful at Merchant Taylors again showing its worth once more. Time and again, Charterhouse defenders were hassled into clearing the ball sideways, the goalkeeper looking especially vulnerable with the ball at his feet. It also quickly became clear that wide men Tristan David and Miles Kellock were going to be vital components of this Harrow performance, both players threatening regularly down their wings with strong runs.

It was Alexi Pittalis who created the first real chance of the game, slipping a perfect through-ball into the path of Azagra to run onto. The youngster did everything right, except apply the finish, skipping round the keeper only to see his shot roll agonisingly wide of the far post. But a few minutes later the Blues got the goal they deserved with a delightful move that saw the ball sprayed out to Kellock on the right wing. He switched play perfectly to David on the left, who beat his man and clipped a cross to the far post. Kellock was on hand to head in from barely a couple of yards out.

At this stage the OHAFC were rampant and smelt blood. Both Alexi Pittalis and Tom Ward headed narrowly wide from set-pieces, before another flowing move saw David fed down the left before he cut the ball back to the edge of the area for Lederman to run onto. The midfielder struck his first-time shot perfectly, but could only watch with disappointment as the ball flew straight into the midriff of the Charterhouse keeper. It didn’t matter. Shortly afterwards Azagra doubled the lead with an almost carbon copy of his first chance. Again Kellock fed him through the middle, again he rounded the keeper confidently. This time the angle was a more acute one, but he composed himself well and rolled the ball in to the delight of his teammates.

The Carthusians mustered something of a response but their attacking play was fairly limited and the Blues rearguard coped comfortably enough. There was an almighty scare as an overhit cross from the right flew towards the far post. Debutant keeper Hammad backpeddled furiously and managed to claw the ball onto the crossbar before it was hacked away to safety. A couple of corners briefly raised Carthusian spirits, but the visitors soon snatched that away with a breakaway third goal shortly before the break. A spell of pressure was successfully defended and the ball broke out of the Harrow box. Lederman collected the ball and carried it out to the right before sliding in Kellock on the outside. He drove past his man and in on goal, only to see his first effort smothered by the keeper at the near post. But the Harrow man showed great persistence to collect the rebound, cut inside a retreating defender and fire in low from close range.

Half-time saw the Carthusians make a switch with a late arrival slotting into midfield and the player he replaced taking over the reins as referee – as it turned out, not altogether successfully. But of far more significance was the new arrival on the field. This straggly-haired stranger immediately added pace and precision to the Carthusian midfield and he seemed to energise his teammates. For the opening quarter of an hour of the second half the home side dominated, the OHAFC barely able to get out of their half. Some superb defending from the back four, including centre-back Ben Butcher who was making just second ever appearance for the side, ensured the Harrow goal remain unbreached. But the key moment came from a lightning-quick break from the hosts, who sliced their way through midfield before squaring to the left side of the Harrow box. A goal appeared inevitable as the midfielder steadied himself with just the keeper to beat. But his low shot gave Hammad a sniff of a chance of reaching it and he reacted superbly, spreading his body like a starfish to deflect the ball wide of the far post. A similar move minutes later saw a similar opportunity spurned, this time a weak shot required no intervention from the Harrow keeper.

As the game entered the final twenty minutes play understandably became stretched and began to flow from end to end. The OHAFC showed their quality on several occasions and really should have extended their lead courtesy of a number of excellent opportunities. They did have the ball in the net when Kellock crossed from the right and the ball flew in at the far post only for vocal Charterhouse appeals to suggest it had already gone out of play. With only the two players closest able to really tell, the Carthusian referee did his best to adopt a diplomatic view and awarded the goal kick, albeit to vociferous Harrow protests. Kellock himself should then have scored when a flowing break saw David drive down the left before switching play to Lederman, who found himself in acres of space on the right. The veteran delivered a perfect cross on the run to the far post only for Kellock to head just wide of the near post. The same two creators, Lederman and David, then combined from a couple of well-worked short corner routines to cause panic in the Charterhouse box, both times the ball somehow staying out of the goal despite the best efforts of Ward and Pittalis.

There was, bizarrely, a second overhit Charterhouse cross, from the same player on the same side of the pitch, that again had Hammad scrambling backwards only for the ball to this time drop just over the bar. But the hosts did score a late consolation, some slack Harrow defending from a corner allowing a free header from a late runner, the ball bouncing down into the ground before rebounding onto the underside of the crossbar and in.

But with time ticking down, and the Harrow skipper now back in charge of the whistle following an injury to a Charterhouse player, there was never much danger the lead would be lost. The Blues record their first ever win over the Carthusians in the League and climb to sixth in the Division Two table, their highest placing this season and a fitting reward for a titanic effort from all involved.