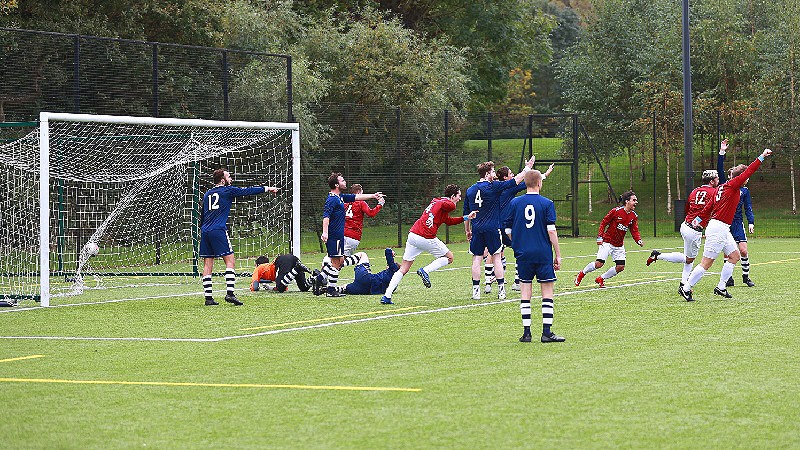 It was once more a case of what might have been for the OHAFC 2s on Saturday afternoon, as they produced another highly competitive performance only to come away with nothing to show for their efforts. The 2-1 defeat to the Old Chigwellians 2s on the Harrow School astroturf was all the more galling for the nature of the visitors’ winner – it came with just three minutes remaining and the scorer clearly handled the ball in the build-up, an offence unfortunately not seen by referee Romaeo Dellanegra. Defeat leaves the Blues in seventh in Division Two, with two wins from six matches played.

Following the previous weekend’s excellent 3-1 win away to the Old Carthusians, spirits were high for the visit of the Chigwellians to the Hill. Fixtures between these two sides have proven notoriously competitive over recent seasons and this game proved no different, with little to choose between the two teams for the vast majority of the match.

With the School enjoying their half-term break, the groundsman took the opportunity to rest the Phil pitches, meaning both the OHAFC 2s and 3s were forced to play on the artificial surface on the opposite side of the Hill. But that did little to dampen the enthusiasm of a 2s squad once more enjoying their football, following a long run of League fixtures without a win. A full roster of fourteen placed themselves at skipper Geoff Taunton-Collins’ disposal, with the starting eleven beginning to take on a settled look. Indeed, of the front six named, only striker Charlie Stebbings did not play in the win at Charterhouse, with Tom Ward and Will Monroe also returning to the back four, alongside Ed David – playing for the first time since he dislocated his shoulder in the forgettable opening day loss to the Old Etonians. Kyri Pittalis and Doug Pratt completed the eleven, with Dolbey, Will Payne and Pedro Azagra, who scored on his debut last weekend, the three substitutes.

Both halves of football saw little to choose between the teams, with short spells in the ascendency proving insufficient for either team to pull clear. The wide artificial surface once more threw up the challenge to the Blues to get the ball to the wingers as often as possible, something the side struggled with for much of the first half. Chigwell threatened initially down their right with Will Monroe enduring a tricky opening quarter of an hour in an unfamiliar left-back position. But Ward and Pratt were their usual stoic selves in the middle and Ed David tried his best to support winger Miles Kellock down the right. The high pressing which has proved such an impressive feature of recent OHAFC displays worked well again here, although to the visitors’ credit they played their way out of trouble neatly on several occasions.

Chances proved hard to come by for both sides, with Chigs forcing a couple of corners which were comfortably defended, Lederman firing a free-kick from twenty-five yards out straight over the wall but safely into Chigwell keeper’s arms. As the half wore on, however, Alexi Pittalis began to have more of an impact and he was perfectly placed to open the scoring when a slide rule ball sent Tristan David through on goal, his initial shot was blocked by the keeper allowing Pittalis to roll into an unguarded net. The Harrow scorer should have added an assist to his name shortly afterwards when another quick break saw him run through the inside right channel. He took out the last defender with an unselfish square pass to gift what looked an almost unmissable chance to Charlie Stebbings to score, but the striker’s shot was too close to the keeper and allowed him to make the save. And the hosts paid the price for failing to establish a two-goal advantage when the visitors levelled courtesy of a free-kick just after the half-hour mark. A nondescript foul forty yards out on the left appeared to offer little threat to the Harrow goal, but the ball in was magnificent, perfectly placed over the heads of the retreating defence and begging to be headed in by an onrushing Chigwellian. Kyri Pittalis was left with no chance as the chance was snapped up, the ball flying high into the roof of the net.

Both sides continued to threaten sporadically, with Tristan David almost scoring twice, bizarrely, from overhit crosses: the first time the keeper did well to backpedal and scramble the ball away, the second time he was left powerless to intervene as the ball floated beyond him only to canon back off the crossbar. A promising break down the right was then abruptly brought to a halt with Alexi Pittalis driving into the penalty area only for the referee to blow for a foul in Harrow’s favour – a decision that was greeted with less than total enthusiasm by the home side.

Taunton-Collins shuffled his pack, with Dolbey and Payne coming on, Kellock and Grasso making way. There was also a very brief appearance from Pedro Azagra, but his five minutes of action saw him chase a through-ball, strain his groin and limp off to the side, not to be seen again. Charlie Stebbings was the beneficiary, re-joining the action far sooner than expected.

The second half followed the pattern of the first, with both sides far too evenly matched for either goalkeeper to be seriously troubled. Pittalis made one decent save diving to his left, whilst the Chigs keeper’s main contribution was a theatrical collapse to the ground under pressure from Alexi Pittalis. After five minutes of lying on the pitch, rolling off it, taking a drink, then rolling back on, he was good to go and the game could restart.

The OHAFC played themselves into trouble a few times trying to pass out from the back, but every time there was a sufficient covering challenge from one of the back four to alleviate the danger. Both Ward and Pratt took turns to drive into midfield with the ball, suffering the usual headrush whenever they had beaten a couple of men and then had no idea what to do. Tristan David got in down the left but was unable to find the right pass or cross, Kellock was kept relatively quiet down the right.

As time ticked on, there was plenty of hustle and bustle, but little sign of either side possessing the requisite quality to break the stalemate. Pittalis was called on to make an excellent save with five minutes remaining, diving full length to palm a shot round the post and that, for all intents and purposes, looked to be that. But from the corner the ball dropped inside the six yard box and an almighty scramble ensued. It was finally prodded in from a couple of yards out only for vociferous cries of handball to erupt from five or six Harrovians – unseen by the referee, the goalscorer had, it would later be confessed, ushered the ball forwards with his arm enabling him to take the final shot. A lucky break for the visitors, a bitter pill to swallow for the Blues.

Spirits remained high in The Castle following the game, with Giacomo Grasso having thankfully safely found his way there and not to some other medieval stronghold in the greater London area. He celebrated by ordering himself fish and chips, seemingly managing to do so without anyone else finding out. A lengthy wait for everybody else’s tea proved well worth it as salvers of bacon and sausage baps then arrived, generously buttered, along with copious amounts of piping hot fresh cut chips and a decent, if unspectacular, array of condiments. It was the least the side deserved following the cruel ending that had befallen them on the field of battle.