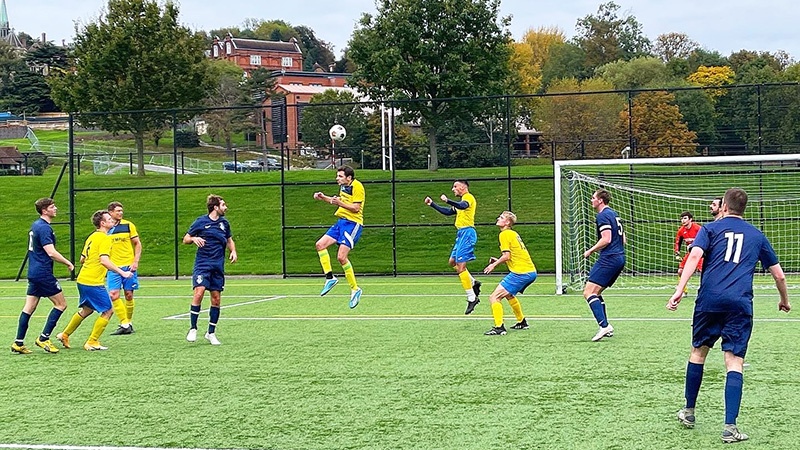 The OHAFC 3rd XI paid for a slow start to their early morning fixture against Division Four leaders the Old Albanians on Saturday, falling two goals behind early on and leaving themselves with too much to do to claw their way back onto level terms. The Blues ended up losing the game 3-1, Dan Graham, who enjoyed a fine game in the number ten role, scoring Harrow’s goal, with all the scoring done by half-time. Despite the defeat, the side remain in fourth in the Division Four table but anxiously looking over their shoulders at the teams below them, all of whom have at least a couple of games in hand.

Skipper Ed Nicholson knew that in order to gain a positive result against a side that had won all four of its League fixtures so far this season, only a perfect performance would do. And initial hopes were dealt a blow with two of the fourteen man squad failing to turn up, with several others arriving only minutes before kick-off. And they weren’t the only ones missing, with the appointed referee also nowhere to be seen. Fortunately, club stalwart David Lederman was on hand to carry out officiating duties, both sides agreeing that delaying the game served little purpose.

Unfortunately for the home side, the lack of decent preparation, in contrast to what appeared a highly-motivated, well-drilled Albanians warm-up, showed in a one-sided opening twenty minutes. The hosts, sporting a smart, brand new home strip of all navy, were sloppy in possession and disorganised out of it. The visitors took barely two minutes to open the scoring, a corner whipped in to the near post was headed in with barely any challenge present.

The Albanians had further chances to score, with Harrow keeper Tom Mitchell continuously called upon to intervene. But he was powerless to prevent the second, a well-worked Albanians move that saw the hosts carved open before a clean strike low into the bottom corner.

At this stage, a thumping defeat appeared on the cards. But to the hosts’ credit they gradually began to awaken from their slumbers and cracks began to appear in the Albanians superiority. Unfortunately, just as the Blues were beginning to crank up the pressure, the Albanians scored a crucial third. Again it came from a corner, although this time Mitchell gave the visitors a helping hand, spilling an attempted one-handed catch and although the first effort was blocked on the line, the rebound was thumped gleefully home. The Harrow stopper did then redeem himself, however, with a truly sensational save from point blank range, throwing himself to his left to deny what appeared a certain goal, to the appreciation of players from both sides.

And the OHAFC earned the goal their perseverance deserved with a well-worked break down the left wing that ended with Jake Speed squaring to the excellent Dan Graham to lift over the onrushing keeper. Barely half an hour had elapsed and it was almost impossible to consider that that would prove to be the end of the scoring.

But that is how it transpired, with neither side able to find the crucial next goal to either put the result beyond doubt, or make a game of it. The OHAFC made their one change at the break, Ollie Atkinson departing and Mikey Watford taking his place. The home side continued to drive forwards in search of a second, but found the stoic Albanians back four simply too powerful both in the air and on the ground. Both Graham and striker Freddie Everett looked lively throughout but simply didn’t receive sufficient service to truly worry the Albanians.

At the other end, the giant Nicholson brothers proved equally unshakeable for the Albanians, who perhaps expected an easier ride than they were given. There was one hair-raising moment midway through the half when Mitchell raced out of his area to intercept a through-ball. Several players converged, the ball cannoned off the keeper and ran safe, the Albanians convinced the Harrow man had handled. Lederman decided any touch with the arm had been an unintentional deflection and awarded a throw-in, the only real moment of controversy in a game that was otherwise played in an excellent spirit.

In truth, it was a ninety minutes the OHAFC 3s see on a regular basis in this division: a competitive performance (the opening quarter of an hour notwithstanding) against a 1st XI side who possessed too much organisation and motivation in a tight encounter, the Blues just not able to raise their game sufficiently to overcome a couple of defensive lapses.

Skipper Ed Nicholson sounded weary of the effort necessary to motivate his troops even before the game had started, but he could only be proud of the performance. With a better warm-up and some tighter marking at corners, the Blues could well have matched the League leaders stride for stride.