Depleted 2s pay for lack of decisiveness at both ends 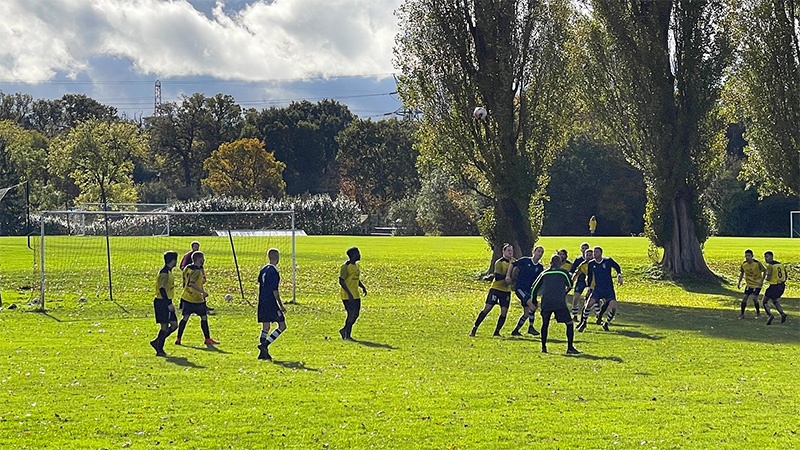 A depleted OHAFC 2nd XI side once more failed to take advantage of the key moments and, as has so often been the case this season, fell on the wrong side of a close result. The Old Aldenhamians 1s profited from a reshuffled back four to score three times on the counter, the visitors’ lone reply courtesy of a fine strike from George Pratt. Defeat leaves the 2s firmly entrenched in the wrong half of the Division Two table with six points from seven games played.

With a favourable recent record against their opponents to draw on and several strong performances in the preceding weeks, the Blues travelled north to Elstree with plenty of optimism but shorn of a number of regulars. Indeed, such was the paucity of resources available, the only substitute was goalkeeper Kyri Pittalis, happy to play outfield if required – Charlie Walsh donned the gloves in goal. The back four saw skipper Tom Ward partnered by Ed Massey – playing his first game since breaking his nose at Charterhouse a few weeks ago – with Callum Barrett at left-back and debutant Fabian Dobree at right-back. The midfield trio included a first appearance of the season for George Pratt, with regulars Lederman, Dolbey, Payne, Kellock and Max Curry filling out the remaining forward positions.

Although the heavy early morning rain had given way to bright sunshine by kick-off time, the OHAFC were greeted by the first heavy pitch they have played on this season, the slightly lethargic warm-up sufficient to scar the top surface in several areas. And the slow start translated into a worrying opening ten minutes, with the Aldenhamians, who had also struggled to gain many positive results this season, dominating possession and threatening down both sides. The rejigged back four were immediately called into work, with the hosts alternating slick passing movements with some surprisingly skilful dribbles across the tricky surface. Ed Massey was an early candidate for the referee’s notebook for a late challenge, although his would not be the last name taken, the visitors’ cause not helped by their opponents claiming for literally every decision from the referee no matter how ridiculous their appeals seemed.

Having weathered the opening quarter of an hour, the Blues finally wakened from their slumbers and began to gain a foothold in the game. Both Will Payne and Max Curry tried to take advantage of a remarkably high Aldenham defensive line with runs in behind and several times they were found by balls over the top from Lederman: Payne scrambled round the keeper only to fire wide, Curry tried a lobbed shot but also missed the target. George Pratt became a growing influence in the middle of the pitch, eluding defenders with a surprisingly deceptive turn and trying to bring the wide players Payne and Kellock more into the game.

At this stage, both teams appeared to be walking something of a defensive tightrope, with the inescapable impression that goals were an inevitability. Both left wingers were constantly being played in behind their respective right-backs, it was a question of which side could take advantage first. Unfortunately it proved to be the hosts, although their break forwards seemed to come from almost nothing: suddenly Dobree and Ward found themselves in a foot race with the pacey Aldenham winger and he drove to the byline before firing a superb shot just inside Walsh’s far post with unerring accuracy. The visitors’ cause then suffered another blow when Lederman limped off a minute later with a groin strain, Pittalis suddenly finding himself thrust into central midfield.

Despite this double setback, the visitors regrouped well enough and continued to try to play their way forwards. The threat from the hosts’ wide men continued, but debutant Dobree grew in stature and confidence, making several well-timed interventions to stop supply to his man. At the other end, Payne continued to look the visitors’ best hope of success, Kellock finding himself on the fringes of the action. And, unsurprisingly, it was Payne at the heart of the move that led to the OHAFC equalising five minutes before the break following a spell of concerted pressure inside the Aldenham half. The diminutive winger jinked past a couple of defenders and was clearly fouled, but referee Sachin Patel played a good advantage. Callum Barrett collected the loose ball and fed square to George Pratt just outside the box, he bundled his way through a pincer challenge from two more players before planting a perfect low shot inside the near post, the Aldenham keeper not even committing to a dive.

With no further options on the bench, skipper Geoff Taunton-Collins, still waiting patiently to be allowed to rejoin his teammates following last year’s knee operation, simply urged his men to continue their efforts, along with a couple of tactical nuggets of wisdom.

But the visitors got off to the worst possible start to the second half when they conceded after just three minutes, a poor goal to give away too, as a free-kick from well inside the Aldenham half was quickly taken, fired long towards the right wing. Callum Barrett backtracked but not quickly enough, the ball flying over his head and into the path of the Aldenham winger. He drove into the box and beat Walsh at his near post.

To the visitors’ credit, they again responded well and should have levelled at 2-2 just over five minutes later when a spell of pressure down the Aldenham left ended with Miles Kellock beating his man and driving the ball across goal. Will Payne arrived from the opposite wing with perfect timing but, amazingly, failed to beat the keeper from barely three yards out, the Aldenham stopper somehow flinging his body in the way of the first-time shot. A hugely frustrated Taunton-Collins could only look skywards in frustration, the side’s inability to stick the ball in the net showing no sign of abating.

The visitors continued to press in search of the equaliser, with Kellock an ever-increasing influence on the right. His now became the side’s dominant wing to attack down and he enjoyed an increasingly competitive battle with his opposite man. Indeed, the game itself grew in tension and emotion as both sides fought desperately to find the crucial next goal: Dolbey and Pittalis were both booked, the latter for a deliberate shove in the back following a perceived foul moments earlier. Referee Sachin Patel was a busy man, at one point bringing both skippers together in a bid to calm tensions.

With twenty minutes remaining, a Harrow free-kick was pumped into the box, George Pratt flocked on and Max Curry was unlucky to see his header fly straight into the keeper’s midriff. The same move ten minutes later almost produced a similar result, this time the flick on ending with Curry hooking an ambitious shot over his shoulder only to see the ball land just the wrong side of the crossbar.

But by this stage the visitors were 3-1 down and heading for defeat. Again, the goal game from a long ball poorly defended. Ward had stormed forwards down the Harrow right following a free-kick but when he lost possession it was pumped forwards diagonally across the pitch, the Aldenham winger again breaking clear to run in on goal and lift the ball over Walsh.

Still the Blues produced chances, Callum Barrett firing an excellent long-range effort with power but straight down the middle of the goal. Walsh then produced an excellent save at his near post following yet another long ball over the top.

It was the last significant action of yet another game the OHAFC competed in for long periods only to find themselves on the wrong end of the important moments. The side now face the Old Johnians home and away over the next two weekends knowing that much-improved performances are required if they are to add to their tally of six points and climb towards mid-table respectability.