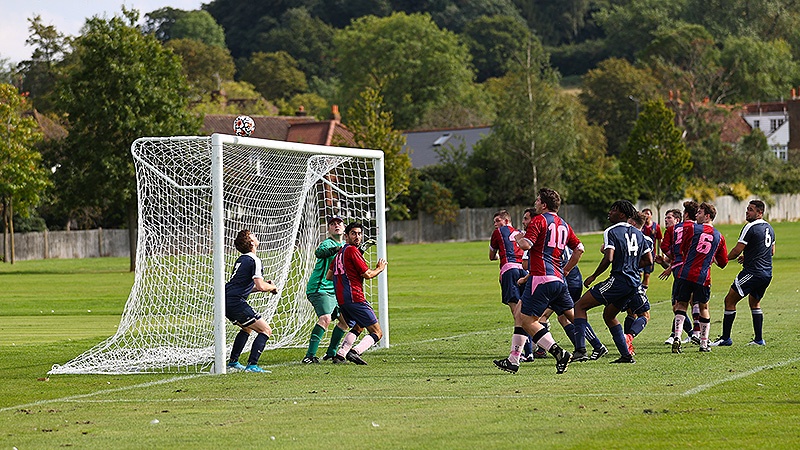 The OHAFC 1st XI battled hard and made life difficult for their illustrious visitors on the Hill, before the reigning Arthurian League champions pulled away in the closing stages to register another thumping victory, the Old Carthusians hitting nine past debutant keeper Rupert Elston. Despite the chastening defeat, there were actually a number of encouraging performances from the home side which bodes well going forwards.

With skipper Fraser McGuinness and vice-captain Dan Firoozan both away, Ed Beecham took the reins for the first time as skipper and called up a youthful side for what is always an eagerly anticipated encounter. The Carthusians have been the benchmark for all other sides to judge themselves against in Arthurian League football for well over a decade and, unfortunately, it would appear they show no signs of relinquishing their dominance any time soon.

Beecham made his first major decision by switching to a back five, mindful of trying to stay in the game as long as possible. Jordache and Owen Edmunds were the wingbacks, with Beecham lining up alongside Hamish MacIntyre and Alex Ellis in the middle. In midfield, Will Swan and George Gould were tasked with patrolling the central area, with a front three comprised of Chris Abdo, Ciaran Jordan and the powerful figure of debutant Ire Adejade. Ollie Atkinson was the lone substitute.

The home side could be forgiven for a sense of trepidation at the size of the task that lay before them – the Carthusians have won the previous dozen League meetings between the sides – but it didn’t show in a highly competitive opening twenty minutes. The new system appeared to suit the hosts well, with excellent balance provided by MacIntyre and Owen Edmunds on the left-hand side. But the visitors showed their class with a well-worked goal that ended with a pinpoint finish inside Elston’s far post. Two defensive howlers then undid all Harrow’s good work to that point and meant that, to all intents and purposes, the game was over. A corner should have been cleared but instead presented a simple tap-in for a loitering Carthusian before Elston then gifted a pass out from the back straight to an opposing striker. Having been right in the game, the Blues suddenly found themselves 3-0 down.

Nevertheless, the side responded well, launching themselves at their opponents in a bid to salvage something from the first half. Abdo and Adejade continued to cause problems with their direct approach and a Harrow goal looked likely. Carts held on, and went one better, breaking up the other end to score a fourth just before the break and snuff out any lingering hope of a miraculous recovery.

Ollie Atkinson came off the bench, with the skipper removing himself from the fray in a bid to ensure everyone played a decent amount of minutes. Indeed, Beecham managed the side well, something that bodes well for future seasons.

As it was, the longer the game wore on, the more the visitors took command, scoring a further five goals after the break as Harrovian resistance wilted in the autumn sunshine. Although it proved a tough lesson that once more sees the side propping up the Premier Division table, there were enough decent performances to provide optimism for the future.