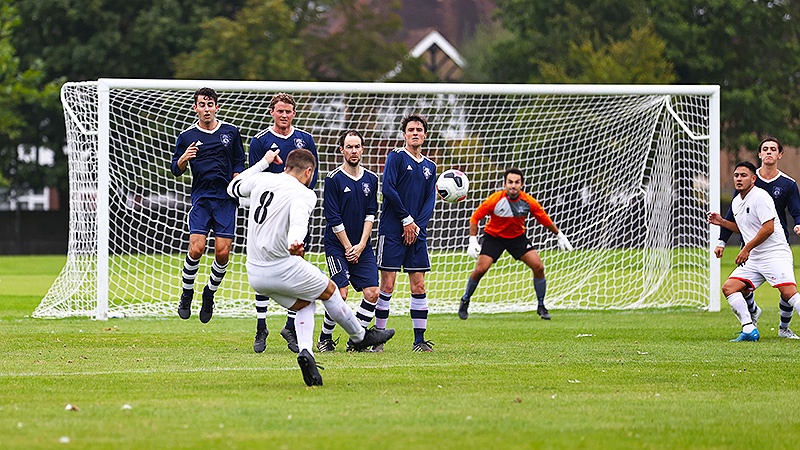 Despite a much stronger showing from the OHAFC 2s on Saturday afternoon, the side still fell to their second defeat of the season, losing 2-0 to the Old Alleynians 2s in a hard-fought Division Two fixture. The defeat leaves the Blues still searching for their first point of the new campaign.

Chances were few and far between in a scrappy first half high on endeavour but lacking somewhat in quality. The hosts looked considerably stronger and better organised than during the previous week’s aberration against the Old Etonians, in no small way thanks to the return to action of first-choice centre-back pairing Harry Woolley and Tom Ward: both players looked like they had never been away, reading any Alleynian attacks early and comfortably snuffing out what little threat there was. Left-back Callum Barrett also enjoyed an enterprising first half that saw him raid forwards on several occasions, enjoying plenty of the ball.

It was, however, a struggle further forwards, despite the best efforts of the energetic Giacomo Grassi and debutant Luca Pittalis, who showed some nice little touches in the centre of the pitch, but neither player was able to free wide men Jack Alhadeff and Jesse Duah and striker Giles Matthey was forced to feed off scraps. Evergreen Max Curry, looking lithe and fit following a summer fitness regime, charged about with his usual tenacity, almost acting as bodyguard to his two much younger teammates in the middle.

With both goalkeepers having had little to do, a scoreless first half looked almost a certainty. But that all changed when the Alleynians earnt their first corner of the game, swinging the ball deep towards the far post from the left. A miscommunication on the goalline somehow saw the ball fly past everyone and straight into the net, the visitors scarcely believing their luck.

Veteran Piers Bourke was introduced for his first taste of competitive action on the Hill in nearly ten years and skipper Geoff Taunton-Collins shuffled his forward line in a bid to extract more from his charges. It proved a frustrating first half an hour after the break, with the hosts enjoying more of the ball but still failing to trouble the Alleynian rearguard on a regular basis. The Blues’ football was also hindered by a scrappy passage of play that saw referee Hitesh Jansari’s whistle sound at every opportunity, the Alleynians ensuring their opinions were well heard.

As the game entered the final quarter of an hour, and the home side still trailing by the only goal, a desperate last throw of the dice was made, Taunton-Collins throwing on a clearly unwell Lederman for the final stages. Space did begin to open up and for the first time in the match, chances were created at both ends. Jesse Duah was twice freed down the left but his first cross was blocked, his second shot was well saved by the Alleynians keeper at the near post.

But as the hosts pushed forward they found themselves exposed at the back and Kyri Pittalis was forced into a couple of decent saves to keep the home side in it. There was little he could do when the Alleynians scored a vital second five minutes from time, a well-worked move saw the ball delivered in from the right and swept into the bottom corner from close range.

Despite the defeat, this was a far more encouraging performance than the season opener last week and with further regulars set to return for next week’s encounter with Radley, the first points of the season shouldn’t be too long in arriving.