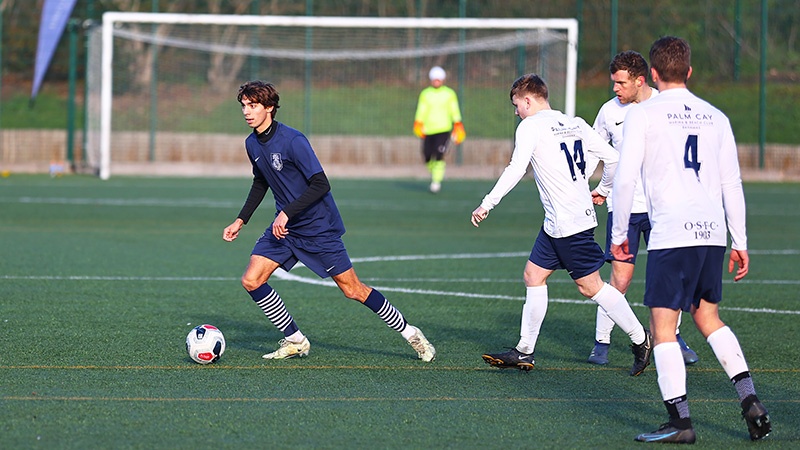 A superb debut from Stanford University student Carlo Agostinelli helped the OHAFC 1st XI to a dramatic 2-2 draw away to the Old Salopians on a frosty Kings House astroturf in Chiswick on Saturday afternoon. An early goal from skipper Dan Firoozan gave the visitors the lead, but the Salopians equalised in controversial circumstances, the referee missing a clear handball from the striker. Level at the break, the two sides struggled to play with the same fluidity in a second half constantly interrupted by stoppages. But the final ten minutes saw plenty of drama. Salopians went 2-1 up courtesy of some sloppy Harrow defending, but the visitors equalised almost immediately, Agostinelli dribbling past three or four challenges into the penalty area before he was bundled over. Firoozan saw his spot-kick saved by the keeper but substitute George Taylor was on hand to fire in the rebound. In a frantic final few minutes, the hosts were reduced to ten men following an awful challenge on the Harrow skipper that saw the referee brandish a straight red card.

The point earned here was fully deserved by a young Harrow side that contained three players making their debuts for the club. With a strong group of fourteen listed as available, that number had been reduced to twelve by the morning of the game, with George Taylor arriving midway through the first half following the late withdrawal of another player. Both centre-backs were playing in the Arthurian League for the first time, John Russell on the right, Musty Akhtar on the left. The third newcomer was Carlo Agostinelli, a lithe forward with excellent balance and dribbling ability – he proved a thorn in the Salopians’ side throughout.

Despite the heavy overnight frost, by the time the midday kick-off rolled around all but a small section of the astroturf had thawed out. There was still a small strip of frozen turf that ran across the southern end of the ground, but of far greater concern to the two goalkeepers was the fierce low sun shining from behind the clubhouse towards the far end. It was the Salopians who had to deal with this in the first half, the OHAFC in their usual all-navy strip.

The hosts made a fast start, launching a dangerous attack down their right wing straight from kick-off that ended with a low driven cross being hacked behind by a Harrow defender. The resulting corner was wickedly curled over Fraser McGuinness in the Harrow goal only for the ball to bounce back off the post and into his grateful grasp.

Thankfully, the visitors settled down well enough and they took an early lead when a bouncing ball midway inside the Salopians half was helped forwards by Will Payne and skipper Firoozan ran on to coolly lob the ball over the advancing keeper. Harrow were on top, but were suddenly given a sharp reminder of the threat the Salopians possessed when their left winger produced a devastating sprint down the line and low cross that just evaded the onrushing striker in the middle. Debutant forward Carlo Agostinelli then came to the fore, showcasing his excellent balance and close control with a series of silky runs and dribbles that perplexed the Salopian defenders, driving them almost to distraction. He was nearly presented with a golden opportunity to open his OHAFC account when Will Swan delivered a ball over the top from right-back, but there was just too much pace on it and the ball ran harmlessly wide.

Then, from almost nowhere, the hosts found a controversial equaliser. A decent long ball over the top ended with keeper Fraser McGuinness racing off his line to intercept. A collision ensued with both the Salopians striker and defender John Russell, the ball dropped to the floor, bounced up and was helped along by a sly Salopian arm, missed by the referee on the other side, before being rolled into the empty net. Protests from the visitors were muted, with few Harrovians having seen the offence and it would be harsh to criticise referee Salvatore Colavito, who couldn’t have seen the incident from his position.

Nevertheless, a slight sense of injustice clearly pervaded for those in blue and the goal led to an increase in aggression and intensity of the play, tempers rising as some minor decisions from the match official then annoyed both teams. The Salopians then felt that they had cause for complaint when another ball over the top caught Russell flat-footed and he appeared to haul down the Salopian striker when clean through only for the referee to wave play on.

The game was now fractured and spoilt by a series of stoppages for fouls and, on several occasions, the ball hitting one of the two wires running across the pitch that help delineate the dividing curtains – the only flaw in the excellent Kings House arena. The visitors tried their best to regain the advantage with a lovely move down their right, Payne and Agostinelli carving through the Salopian defence with a one-two, Payne’s run and shot blocked by an excellent sprawling save from the ever-alert Salops keeper. The subsequent corner then led to a penalty shout from the Blues, Agostinelli going down under what looked a trip from the defender. Again, play was waved on.

The visitors finished the half strongly, Firoozan firing over from close range following Agostinelli’s free-kick before an excellent move instigated by yet another mazy dribble from the debutant down the inside left channel saw him reach the edge of the box before squaring across – Firoozan dummied cleverly allowing the late arriving Swan to shoot on goal, but once more the Salopian keeper proved up to the challenge, his save ensuring the sides went into half-time level at 1-1.

No changes were made by either side at the break, but barely had the second half begun when the Salops keeper was earning his keep once more, another fine Harrow move saw Swan find Jordache and he unselfishly squared to Agostinelli but his shot was blocked from point-blank range.

Disappointingly, the second half was slow to get going, with two lengthy stoppages for Salopian injuries, one lasting over five minutes. Once play resumed, it was the Harrow keeper called into action first, saving superbly from a powerful shot that was arrowing into the roof of the net. McGuinness got a strong fist on the ball but the ricochet carried it almost straight over his head and Jordache had to react smartly to race back and complete the clearance off the line.

Eight minutes into the half Harrow made their first change, the late arriving George Taylor, who has proved a revelation in his first season of OH football, coming on for defender Musty Akhtar. And the substitute was immediately in the thick of the action, only for his run in on goal to be cut short by a tight offside call. Debutant John Russell then received the yellow card he probably deserved in the first half for a last-ditch tackle after he had been caught in possession at the back – another lucky escape for the Blues. They would get even more fortunate shortly afterwards when an awful clearance presented the ball to a Salopian fifteen yards out but with the goal at his mercy the player smashed his shot wildly over the bar.

With a quarter of an hour remaining and the game still tense but devoid of any real quality, Ed Corswarem was forced off with an ankle ligament injury following a block on a cross, Akhtar rejoining the fray. Salopians began building a slight head of steam, but McGuinness remained untroubled in the Harrow goal. That was until the Harrow back four’s luck ran out, another defensive howler this time dutifully punished. Under no pressure, the ball was passed from the back into midfield, but the return ball was a careless one and the Salopian forward reacted quickest, sprinting past the static Harrow defence and hoving in on goal. McGuinness made an excellent save to his left to block the first effort, but the ball rebounded kindly and allowed the forward a simple finish second time around.

Having barely created a chance for the majority of the half, this sudden reversal appeared to spell doom for those in blue. But within a minute the sides were level again, the equaliser owing everything to a majestic run from that man Agostinelli again. Straight from kick-off the Blues attacked down their left. The debutant collected the ball five yards outside the box and began a weaving run that carried him past two, three and four Salopian defenders into the box. It was too much for one of the centre-halves, who clearly had seen enough. A wild swing dumped Agostinelli on the floor and this time referee Colavito had no hesitation in pointing to the spot. Skipper Firoozan took on the responsibility only for the keeper to save his rather poorly-directed effort. Fortunately the ball ran back to George Taylor, who just got to the rebound ahead of Will Payne and slotted in to make it 2-2.

There were few chances in the remaining seven minutes, but one final piece of drama, a straight red card for a Salopian midfielder, who for some unknown reason launched an awful knee-high stamp on the Harrow skipper close to the touchline. Despite the surprised reaction of his teammates, it was a very unnecessary challenge, especially so late in the game. VAR would have been unlikely to intervene.

So a decent end to 2022 for the OHAFC 1st XI and another hard-earned point that sees the side sit in seventh heading into the Christmas break. Eight games remain in the season and the side will be aiming to win three of them to ensure there is no late drama come spring.