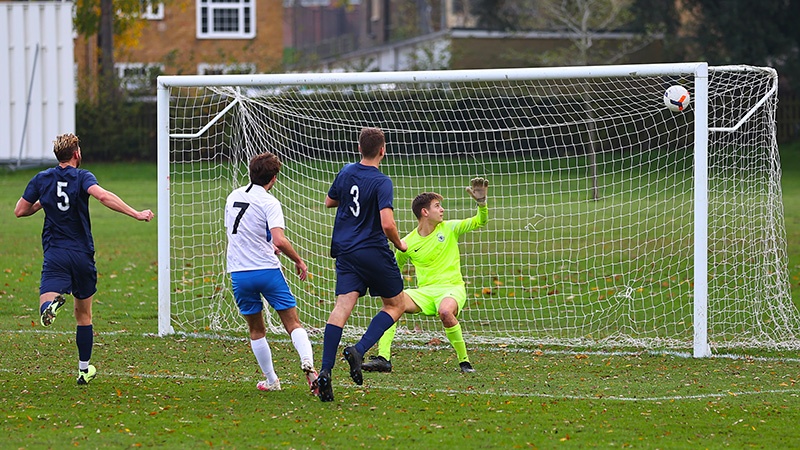 For the second consecutive weekend, a strong first-half display by the OHAFC 3rd XI counted for little at the final whistle as a 2-0 lead at home to the Old Brentwoods 3s was squandered in a disappointing second half, the side from Essex easing away to complete a 6-3 victory with a flurry of late goals. Early efforts from Jamie Jordache and Adam Graham provided a strong foundation for the hosts, but Brentwoods rallied late in the first half, pulling a goal back just before the break following a decent spell of pressure. The visitors then stepped up a gear in the second half, completing the League double over their opponents and consigning the Blues to a second consecutive League defeat.

With the rain having relented sufficiently during the week to allow the fixture to be played on the main Phil pitch, neither side could complain about the conditions with little wind and a pristine playing surface greeting them on arrival. The 3s named another strong squad of thirteen for this game, youngsters Andrew Chan and George Whitcombe – both enjoying their debut seasons of old boys football – on the bench, but Doug Pratt, Will Monroe and Jamie Jordache all adding considerable experience to the heart of the side.

Having travelled up to Essex earlier in the season and suffered a disappointing 2-0 defeat, the Blues were keen to exert their authority from the start and, following a rather nondescript opening, suddenly sparked into life with ten minutes on the clock. A long free-kick from the edge of the Harrow box was pumped forwards by stand-in keeper Henry Collins, flicked on by winger Alvin Adefarasin and Adam Graham drove down the left towards the Brentwood goal. He was scythed down a yard outside the box by a desperate lunge from the last defender, who immediately fund himself in referee Hitesh Jansari’s notebook. Jamie Jordache stepped up and coolly curled the ball low past the wall on the outside, the keeper clearly unsighted as he barely moved despite the ball passing him in close proximity.

Then, moments later at the other end, an almost identical incident ensued as Doug Pratt slipped attempting to make a tackle and hauled down a Brentwoods forward on the edge of the box. Unsurprisingly, there followed immediate appeals for a straight red, but another yellow was produced, both sides now with a player booked inside the opening ten minutes. Fortunately, the set-piece came to nothing.

The game continued in a rather scrappy vein, with more energy seemingly expended on moaning at refereeing decisions than ensuring passes found a teammate. Jamie Jordache was the victim of another poor challenge that earnt a second yellow card for the visitors, fortunately the midfielder was able to dust himself down and carry on. The visitors did put together a couple of decent moves but Collins remained alert in goal, coping easily with whatever was thrown at him.

With little in the way of goalmouth incident to excite those watching on, the home side then doubled their lead from almost nowhere. A booming goal kick from Collins was this time flicked on by Adam Graham and Adefarasin ran on to comfortably take the ball round the keeper and tap into an empty net. 2-0 to the good with just under half an hour played and the home side were, unsurprisingly, cock-a-hoop.

Adam Graham continued to prove a real handful for the visitors, his physical presence unsettling the back four. Several times he narrowly failed to free Olly Roberts down the right, the Blues looking the more convincing side going forwards. Brentwoods managed to fire off a couple of long shots that flew wide, but Collins remained untested in goal.

On the half-hour mark, skipper Olly Roberts took himself and Doug Pratt off, Whitcombe and Chan coming on. This required a bit of a reshuffle at the back and in midfield and the home side clearly lost some momentum as for the remainder of the half it was the visitors in control. Brentwoods dominated possession and camped inside the Harrow half, although the Harrow defence coped well enough, defending some dangerous crosses and limiting shots on goal.

But five minutes prior to half-time the resistance was broken, a fine pass inside left-back Whitcombe saw the Brentwoods right winger run on a plant a pinpoint left-foot shot into the near top corner. The goal solidified the growing sense that this game was far from over and only a strong performance from the OHAFC in the second half would secure a positive result. The skipper rang the changes again, with Charlie Dunn and Alvin Adefarasin now taking their rest for fifteen minutes, Roberts and Pratt rejoining the fray.

But the hosts made a disastrous start to the half, conceding a second within thirty seconds of the restart. A fairly innocuous ball through the middle of the pitch caught the centre-backs napping and a forward ran through, just getting to the ball ahead of the onrushing Collins. The ball was poked past the keeper and rolled agonisingly slowly towards goal, Doug Pratt just failing to scoop it away with a despairing lunge.

To the Blues’ credit they responded well to this setback, dominating the next ten minutes, without ever finding the final ball that would create a clear chance. But this revival was cut short five minutes later when the visitors took the lead for the first time in the game, a quick break forwards was only half-cleared to the edge of the box and one pass inside allowed a midfielder to smash a long shot in from twenty-five yards out. Collins probably should have done better, getting both hands to the ball, but unable to divert it sufficiently to send it over the bar.

Brentwoods now assumed almost total control, dominating possession and winning the lions share of possession. A substitute missed a golden opportunity to double the lead when he fired wide from five yards out, but just after the hour mark it was 4-2, a strong run down the right wing left Jamie Jordache straining to recover, the ball was crossed into the near post and finished first-time.

Two further goals in the closing twenty minutes gave the scoreline a rather harsh look, a spectacular long-range effort from one of the centre-halves flew into the top corner and a rather more mundane near-post header from a corner completed the visitors’ scoring for the day. Adam Graham pulled a goal back for the hosts with a few minutes remaining, tapping in from close range after the keeper had kept out a shot from younger brother Dan.

But by this stage the Blues were well beaten and probably sick of the verbal inanities of their opponents, who stuck to their traditional routine of solidly ignoring the ‘let your football do the talking’ maxim.

Fortunately, barring an unwelcome Cup draw, the two sides will not have to face each other again until next season…