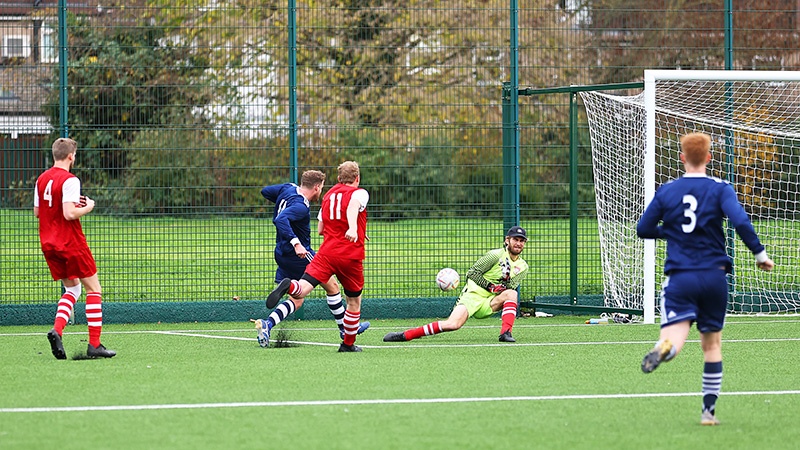 A straight red card for Felix Orchard just ten minutes into the game killed any realistic hopes the OHAFC 2nd XI had of causing an upset on their visit to Division Two leaders the Old Radleians on Saturday afternoon. Despite performing well throughout, and missing several clear chances to score, the Blues trailed 2-0 at the break and two further goals early in the second half ended the match as a contest. Radleians added a fifth with half an hour remaining and saw out the remainder of the game with the minimum of fuss. The defeat leaves the 2s stuck in eighth place in the table, still with just a solitary victory to their name this season.

But there was little to criticise in this display, with the visitors more than matching their opponents for most of the first half, despite the hugely unfortunate early dismissal of Felix Orchard, who was making his first appearance of the season due to a long-standing knee problem. The Blues had already been warned of the pace the Radley striker possessed when he had come close to being played through a couple of minutes earlier. Then, with just over ten minutes played, a through-ball split the Harrow back four and, as the striker neared the penalty area, Orchard clipped him, almost accidentally, sending the player tumbling to the turf. The hosts immediately appealed for a red card, which referee Mohammed Shohel duly produced. Whilst technically it was the right decision, it was still something of a surprise to see the letter of the law applied so strictly, so early in the game.

The Blues shuffled their pack immediately, veteran Paul Molloy, making his first OHAFC appearance of the season, retreated into the back four alongside Tom Ward, the midfield now a quartet of Dolbey, Khan, Newton and Lederman, Max Curry continuing alone up front. And for twenty minutes the change seemed to have little impact, with the both sides enjoying spells on the ball, the Radleians appearing more comfortable at the back but rarely threatening the Harrow goal, Molloy and Ward, alongside full-backs Monroe and Callum Barrett, snuffing out any threats and protecting keeper Rory Miller well.

As the half wore on, and as could reasonably be expected given the circumstances, the visitors began to find it increasingly harder to progress the ball forwards. The intention to keep playing the right way was good, but Radley pushed higher up and either pressured the Blues inside their own box or forced the back four to go long, with almost inevitable loss of possession following.

Despite this, it took a goal of real quality to break the deadlock: a ball was cleared out to the Radley left and the central midfielder collected before looking up and curling a shot from twenty-five yards out right into the far top corner, Miller unable to use his tall frame to get anywhere near it. A second then followed five minutes later, a well-constructed move that saw the ball switched from right to left and a simple square pass took out the Harrow keeper, allowing the striker a tap-in from five yards out.

Harrow heads remained high, the side continuing to play with spirit and no little skill, but the feeling persisted throughout that the potential for a very competitive games of football had been lost with the early red card. Curry continued to run his socks off up front, but with the midfielders struggling to make up the ground to support him, the threat to the Radley goal was negligible. At half-time it was clear that a decision had to be made as to how much risk the Blues should take in a bid to try to haul themselves back into the game. The midfield were asked to push forwards more in a bid to support the lone striker, the greater potential to being left exposed at the back deemed worth it.

And barely had the game resumed when the more positive approach so nearly paid off: Azhar Khan, back on form following a couple of rather quiet performances, delivered a superb pass over the top of the defence to send Curry clear and in on goal, only for the finish to rise a fraction too high and rebound square off the crossbar and away to safety.

It was a mistake that was to prove costly. Within five minutes the hosts had scored twice to put the result beyond doubt. Both were easily preventable goals, the first a cross-shot from a narrow angle on the right that somehow sped through defenders and keeper, the second a free header at the far post from a corner, Lederman unable to keep it out on the line.

Unsurprisingly, the Blues’ spirits suffered somewhat, any hopes of a comeback firmly extinguished. Newton and Lederman were replaced, the former for parental reasons, the latter protecting his recently-recovered groin strain. Luke Berry and Joss Awdry generously offered to play, despite later being named in the starting XI for the 3s game against the Ardinians.

The Blues continued to play with spirit and really should have scored, Berry somehow missing an almost open goal after Curry’s shot had been saved by the keeper, the striker himself then firing wide of the near post following an excellent run down the left side of the penalty area. When the hosts then cleared a goalmouth scramble following Molloy’s header from a corner and Khan struck powerfully but straight at the keeper from the edge of the box, it was clear that this simply was not to be Harrow’s day.

The Radleians added a fifth with twenty minutes remaining just to sink the final nail into the Harrow coffin, confirming a fourth win in five meetings between the sides since the Reds were relegated from Division One several seasons ago. All three fixtures hosted by the Radleians in that spell have ended in defeat for the OHAFC. Despite the excellent performance given the circumstances, it’s still a fourth defeat in eight for the 2s and a second consecutive game without scoring a goal. Three games remain prior to the Christmas break, the need for points grows ever greater.