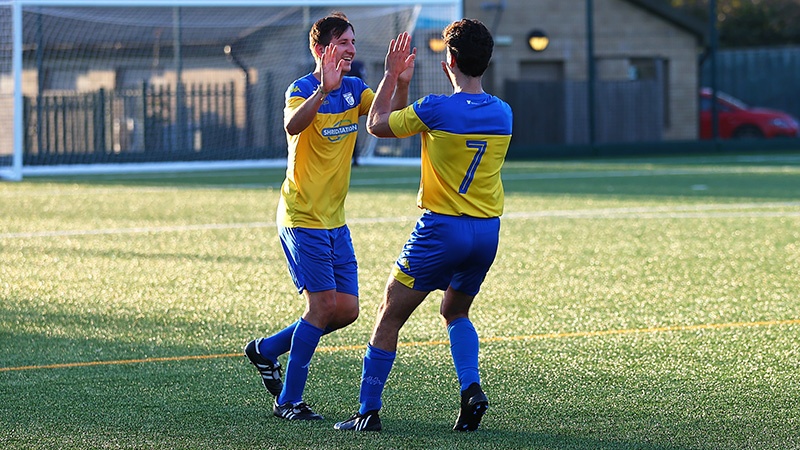 A much-changed OHAFC 3rd XI fell to a third successive defeat on Saturday afternoon, falling 3-2 to the Old Ardinians 2nd XI despite twice taking the lead on the pristine astroturf in Whitton. Freddie Everett gave the visitors an early lead, but Ardinians responded midway through the first half. Five minutes later Luke Berry restored Harrow’s advantage but again the hosts equalised, the two sides level at 2-2 going into half-time. The second half was hard fought with chances few and far between, but with just under twenty minutes remaining a long ball over the top of the Harrow back four saw the Ardinians left winger run through and chip stranded keeper Rory Craig to seal victory for the Ardinians. The Blues remain third in Division Four but are now running out of games, with only five League fixtures remaining this season.

Saturday’s final whistle at Whitton brought to an end a chaotic week for the OHAFC, with all three sides scrambling to find players to fulfil fixtures. Such was the paucity of availability, no fewer than seven of the Blues in action for the 3s had already featured in earlier games: Will Payne, Tom Mitchell and Murray Barr all played ninety minutes for the 1s before travelling south to make kick-off for this game. Azhar Khan and Rory Craig had played ninety minutes for the 2s, with both Luke Berry and Joss Awdry appearing as second half substitutes. It was hardly surprising that well before the final whistle, several of the Harrow side fell to ground suffering the effects of cramp. The 3s weren’t helped by the awful news early on Saturday morning that vice-captain Olly Roberts had been the victim of a serious assault the night before, spending much of the night in A & E and getting seventeen stitches in a head wound. Thankfully, Olly seems to be ok.

Despite this enormous turmoil, the 3s gave an excellent account of themselves and will feel unfortunate not to have taken something from this return fixture against an Ardinians side they had defeated 3-1 on the Hill a few weeks ago. The visitors made an excellent start, taking the lead after just six minutes with pretty much their first attack of the game, Will Payne driving down the left before slipping the ball inside the retreating centre-back, allowing Freddie Everett to run on and coolly finish inside the near post for his second goal of the season.

The game settled down following this early breakthrough, with both sides looking decent on the ball but unable to create much danger inside the final third. Both keepers remained relatively untested as the half-hour approached but, as the sun came out, the hosts restored parity with an excellently taken goal: a ball in from the Ardinians right found the tall centre forward loitering on the penalty spot, his first touch was perfect, killing the cross dead before his second saw him volley the ball with precision into the bottom corner to make it 1-1. The same player had what appeared an even simpler chance to score moments later when another excellent cross into the Harrow box saw him flash a header wide of the far post from no more than eight yards out.

But it was the visitors who regained the initiative just before the half-hour mark with Payne and Everett again involved. This time the winger cut the ball back from the goal line, Everett’s first-time shot was parried by the keeper, but Luke Berry followed up to turn in slightly awkwardly, the ball almost behind him as he swivelled on the stretch.

It was clear that neither side appeared fully confident at the back and the Ardinians needed only eight minutes before they were back on level terms. A well-worked move saw the ball fed into the centre-forward just inside the box and he turned Felix Tritton adroitly before placing another low finish past a helpless Craig in goal.

Skipper Tom Mitchell, who had been filling in at centre-half in a bid to maximise his playing resources, removed himself at the break, Khan coming on following a strong showing in the 2s game. But the Harrow skipper’s stay on the sidelines would last only five minutes, Charlie Lupton, one of the few Harrow players not to have already featured in the weekend’s fixtures, cramping up and requiring a fifteen-minute break.

The first half of the second half proved rather bereft of goalmouth incident with the low sun shining straight into the Ardinians’ faces proving less of a handicap than could have been expected. Indeed, the hosts’ keeper’s main contribution to most of the half was to offer advice to the referee – clearly his lack of action leaving him feeling rather left out.

But with twenty minutes remaining, and the sides still locked at 2-2, the game suddenly increased in intensity. Lupton replaced Awdry for the visitors and almost immediately Luke Berry found himself in on goal, Jake Speed driving down the right and producing a low cross, the keeper thwarting the shot with a solid block. Moments later the importance of that save became clear as a sudden loss of Harrow possession in the middle of the pitch saw the ball pumped long over the top and the speedy Ardinians left winger cut in off his flank to race through and clip a first-time shot over the stranded Rory Craig, who had initially raced off his line, only to think better of it.

The visitors were now up against it, Khan booked for a petulant off the ball incident, Mitchell limping off with cramp following a few minutes of treatment on the pitch. Will Payne, who had been running on fumes for most of the second half, still produced a half-chance as his run and cross from the left teed up Everett but his near-post shot lacked conviction.

When Murray Barr then went down injured, poor Tom Mitchell had to limp back on, the 3s beginning to resemble the waiting room at a hospital A & E department. But all the effort so nearly proved worthwhile as the Blues came within inches of snatching a point: Felix Tritton strode forwards from the back and crashed a shot from thirty yards out towards goal. The ball snicked off a defender, carrying it past the keeper, only for it to smack against the post, rebound back onto the goalie before rolling wide for a corner.

The final moments saw Craig make an excellent diving save to his left to prevent an Ardinians fourth, at the other end Joss Awdry crashed a long shot just over the bar from the edg of the box. It was to prove the final chance of the game, Mohammed Shohel’s whistle bringing to an end a tumultuous and, ultimately, unsuccessful weekend for the OHAFC. The 3s remain in third in Division Four but have now played eleven of their sixteen League games and really need at least another couple of wins to feel secure. Their relentless schedule, that has seen them play every single Saturday since mid-September, shows no signs of slowing up, with the side bizarrely slated to play thirteen League games prior to Christmas, including next weekend’s visit of the Old Wellingtonians to the Hill.