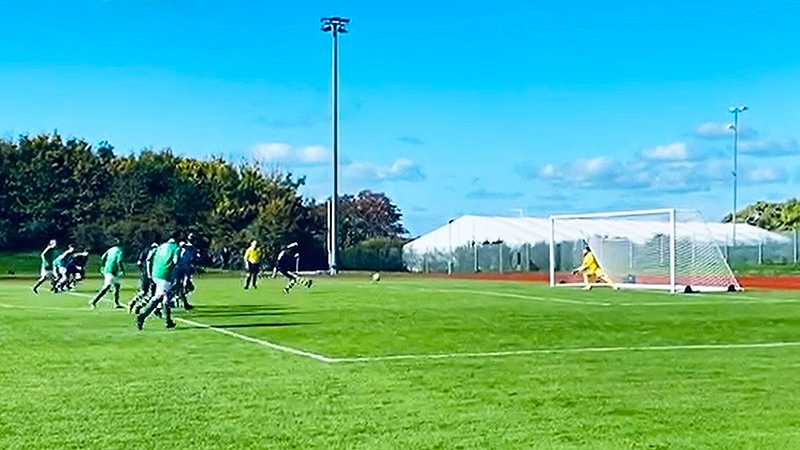 Despite once more failing to record a first victory of the season, the OHAFC 2s continue to improve the level of their performances, coming away from a tricky visit to Division Two leaders the Old Malvernians with a fully deserved 2-2 draw, sealed in dramatic fashion when David Lederman slotted home an 89th minute penalty at Brunel University Sports Ground on Saturday morning. The visitors trailed 2-0 at half-time but played superbly in the second half, setting up camp almost exclusively inside the Malvern half. A valiant defeat seemed likely, however, before David Griffiths, playing his first game of the season, was barged in the back inside the box and Lederman stepped up to ensure Harrovian efforts had not been in vain.

Yet another rather tumultuous week had left skipper Geoff Taunton-Collins only able to rely on a bare eleven for the trip down the A40 to Uxbridge and the magnificent main pitch at Brunel University: wide, billiard-table flat and without a hint of a breeze, the playing conditions are unlikely to be bettered at any OHAFC game this season. If the skipper was short of players, one thing he wasn’t lacking was boots, with Giacomo Grasso, whose flight from New York had landed only a few hours before kick-off and ailing striker Pedro Azagra, whose dead leg suffered a week before was still causing problems, both in need of replacement footwear. Azhar Khan was suffering from a bad back, and with left-back Callum Barrett, left wing Tristan David and Griffiths, who usually plays in goal but was now being asked to fulfil a role on the right wing, all in action for the first time this season, the potential for mishap was greater than normal.

But despite a rather hurried warm-up, the Blues played superbly, the opening quarter of an hour perhaps the only disappointment of the ninety minutes. Much of the chatter pre-game centered around keeping possession and trying to make the opposition work to regain possession, but the visitors ignored their own advice, instead launching balls forwards rather haphazardly in the vague direction of striker Azagra with the result that it was themselves, not the Malvernians who were forced to chase. Despite this, keeper Rory Craig remained relatively untested in the Harrow goal, with the new signing showing improved judgement and timing with every appearance.

The Blues finally settled down and began to play with a more considered approach, vital on such a large pitch. For a quarter of an hour they more than matched their hosts, whose rather tame start belied a side with a record of three wins and a draw from four matches played so far. Griffiths displayed excellent energy and tenacity, happy to leave his right flank to join in play in more central areas, with Azagra putting himself about up front and Tristan David looking lively down the left. Several corners and free-kicks were forced in the attacking third but the quality of the deliveries varied and the Malvernians defended without too much concern.

It was frustrating that as the first half entered its closing stages, the hosts scored twice from rather innocuous situations. A deep cross to the far post was headed clear but the Malvernian player wasn’t closed down quickly enough and he produced a fine curled effort inside the far post to break the deadlock. Less than ten minutes later and a scramble inside the Harrow box saw Craig forced to parry a fierce shot out only for the rebound to fall straight to a loitering Malvernian and he wasted no time in slamming the ball back in through a sea of Harrow bodies.

Without a substitute to call upon, the Blues had to regroup at the break, the majority of the discussion focussing on the positioning of the midfield trio and whether or not a holding player was really necessary with the side trailing by a couple of goals. The decision was taken to try to push the whole side further up the pitch in a bid to offer greater support to the rather isolated Azagra.

How much of the ensuing change in the balance of play was due to the shift in tactics is debatable, but the visitors played superbly in the second half, quickly establishing themselves in the Malvern half and rarely being forced out of it. The odd lone Malvern break aside, the Blues probed down both flanks, although were continually frustrated by some solid Malvernian defending that saw the ball pumped out for countless throw-ins. The Blues did look dangerous from set-pieces however, with Lederman and David both delivering better quality balls in and the hosts scrambling to clear with far less conviction than they previously exhibited.

A rather hopeful Harrow penalty appeal for handball was waved away by referee Kevin Turnbull, who began to lose patience with several players from both sides due to constant whining over decisions. And, as time ticked on towards the closing quarter of an hour, the 2s frustrations grew.

But hope sprang from a superb team goal, so simple in thought and measured in execution, it was almost impossible to believe it had succeeded. Taunton-Collins began the move at right-back, passing inside to Grasso, he drew a couple of Malvernians before asking Alexi Pittalis to drive forwards. Into Malvernian territory and the ball was played further wide to Callum Barrett, who slipped it inside towards the goalline for Jack Dolbey to run onto. With the hosts struggling to get near the ball, Dolbey drove a low cross to the far post and Azagra scrambled in at the second time of asking.

Fifteen minute remained and the OHAFC now believed anything was possible. The Malvernians clearly feared the worst, with every misplaced pass and hacked clearance eliciting cries of anguish. An almost identical move down the Harrow left this time saw David supply the cross but it just evaded Griffiths who had made a late run to the far post.

The final five minutes saw action at both ends as a rare Malvern break ended with the right winger flashing a shot from distance right across goal, the ball fizzing past Rory Craig but well wide of the far post. With time almost up, Lederman collected the ball just inside the Malvern half and clipped it into the box towards Griffiths. With his back to goal and the ball bouncing up towards his chest, there appeared little immediate danger. But one of the Malvernian centre-halves couldn’t help himself, barging into the forward’s back and sending him tumbling to the turf. The referee immediately blew for the foul and the lack of any real protests from the hosts was telling. Lederman, as he has done numerous times in the past, assumed the responsibility from the spot and waited for the keeper to commit to his right before firing the ball the other way.

The couple of minutes of injury time still provided a heart-stopping moment as almost straight from kick-off the Malvernians found themselves inside the Harrow box, the Blues struggling to clear. A couple of efforts were blocked, still the ball wasn’t cleared. Finally, with Harrow bodies strewn across the area, a wayward shot flew over the bar and a collective sigh of relief was emitted.

The Blues still need to claim that elusive first win of the season if they are to climb up the table, but further performances of this nature will surely render it only a matter of time.