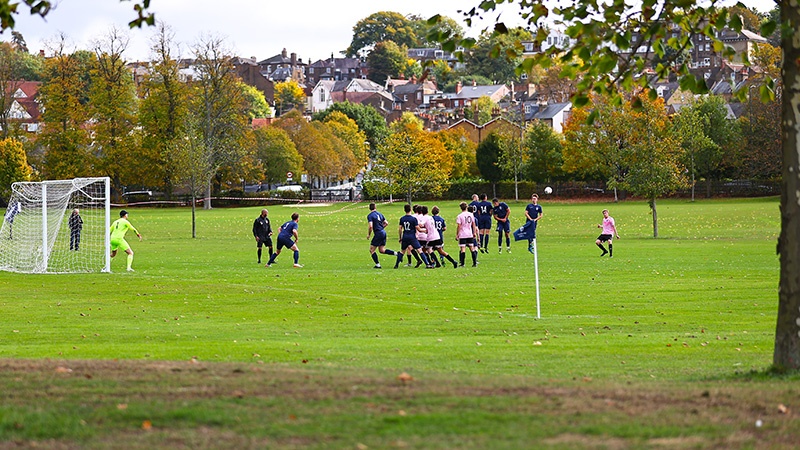 Two very different goals, one in each half, helped the OHAFC 1st XI finally secure their first win of the 2022/23 season as they defeated the Old Salopians 2-1 on the Phil on Saturday morning. A somewhat fortuitous strike from Will Swann, allied to a superb team goal rounded off by Doug Morrison proved sufficient, the three points propelling the Blues up to sixth in the Division One table and providing a timely fillip ahead of next week’s arduous trip to Dorset to face the Old Shirburnians in the first round of the Arthur Dunn Cup.

On a beautiful autumnal morning, the hosts started brightly, enjoying plenty of possession as the visitors, somewhat surprisingly given their lofty status in the division, seemed content to sit back and soak up pressure. Ollie Atkinson, in particular, looked threatening down the right, although for all their superiority, the Blues struggled to create many clear-cut chances. Several corners were forced, but these were all defended stoutly.

The breakthrough arrived midway through the half and owed a great deal to good fortune. A free-kick on the Harrow right was ten yards inside the Salops half. Will Swan attempted to swing the ball in to the waiting phalanx of OHAFC players just inside the box, but overhit the delivery and the ball sailed, apparently harmlessly, towards the Salops keeper. But under minimal pressure from a couple of attacking players, the keeper panicked, the ball hitting him firmly on the chest then rebounding off his arms and back into the goal as he attempted to cling on to it.

Despite the fortuitous nature of their lead, the home side continued to press forwards, still looking the better side as half-time approached. But with practically their only meaningful attack of the half, the visitors levelled in frustrating circumstances. A counter-attack down their left saw the ball delivered into the box. Morgan Ward intercepted well but as he attempted to clear, a Salops striker just nicked the ball off his toes and Ward’s swinging boot clattered into shin rather than ball. The referee pointed to the spot and keeper Tom Mitchell, promoted from the 3s for this fixture, was sent the wrong way.

Ed Corswarem and Fabian Dobree replaced Swan and Atkinson at the break and the pattern of the game resumed almost immediately, the Blues making light work of the Salopians and regaining the lead barely five minutes after the interval. This was an excellent goal, as sweeping and accurate in its production as the first goal had been lumpen and fortunate. The move started from the back, the ball being played into Will Payne’s feet in the middle of the pitch. He swung play out to the right for Morrison who crossed for Ciaran Jordan, the striker’s first time shot from fifteen yards out flying into the top corner of the goal.

With the lead regained, the Blues dug in, the game becoming scrappy as a result. Play switched from one end to the other at a rapid rate, but, in truth, neither side possessed the requisite ability in the final third to create any decisive chances.

That was until ten minutes from time, when Payne spurned a golden opportunity to put the game beyond the visitors’ reach. Doug Morrison fed the wide man behind the back four, Payne’s pace carrying him beyond the centre-half and onto the ball ahead of the keeper. A slightly heavy touch forced the forward wide, but the goal was gaping. His shot unfortunately cannoned back off the post and was cleared, the hosts forced to hang on a while longer.

That they did so in relative comfort was testament to the spirit and organisation, qualities perhaps not in evidence enough in the 1s over the past few seasons. But on this occasion they proved more than enough to hold off an eager but limited Salops side. It can only be hoped that the three points earned prove a springboard to further triumphs this season, the side have proved they are more than capable of picking up wins in this division if they are in the mood.