2s earn first win in scrappy affair on the Phil 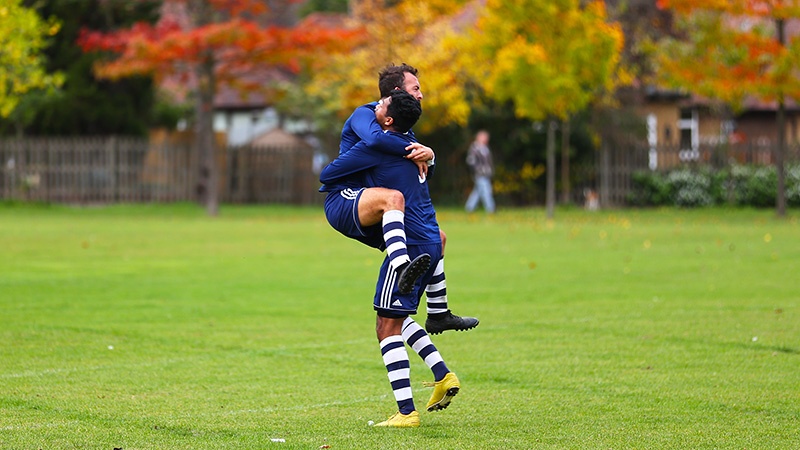 Sometimes, in football, the result is more important than the performance. Having improved steadily since a narrow opening day defeat away to the Old Aldenhamians, the OHAFC 2nd XI had picked up deserved draws at home to Eton and away to division leaders the Old Malvernians last weekend. A first win of the season continued to elude the side however. But on a blustery, grey day on the Hill, that particular bogey was laid to rest as the Blues battled hard to overcome newly-promoted Cholms 2s 3-1, in the process propelling themselves into the top half of the table.

This was far from a classic, with both sides struggling to play particularly pleasing football in the strong breeze blowing across the pitch towards the Alcock Pavilion and on a pitch still showing plenty of scarring from the long, hot summer. None of the four goals scored involved any semblance of intricate build-up, but given the circumstances, this will matter little to the OHAFC.

A frantic opening ten minutes saw play switch from one end to the other at lightning pace. The hosts should have scored inside five minutes, Tristan David collecting a loose ball on the left of the area, but with just the keeper to beat the ball appeared to bobble at the moment of impact and his effort was sliced horribly wide. Back came the visitors, with their midfield trio enjoying more time and space than they should have been permitted. Cholms switched play nicely, their best chance coming from a corner that was initially cleared, but the resultant first-time cross to the far post caught the Harrow defence napping and a free header was planted over the bar.

As the game began to settle down, it became clear that the conditions would have a strong impact on proceedings. The home side struggled ferociously to string passages of play together, although some headway was made down the flanks, with Ed Pagani enjoying another excellent game at left-back and skipper Geoff Taunton-Collins undoubtedly putting in his best display of the season so far on the right.

Given the bitty nature of the football, it was hardly a shock to anyone that the opening goal arrived courtesy of the most basic route imaginable: Kyri Pittalis fired a goal kick long, the Cholms centre-halves missed it completely and Max Curry, playing up front, ran on to beat the keeper inside his near post.

The remainder of the half proved a real battle, with the hosts slowly regaining their defensive shape that has served them so well this season. The Cholms back four looked especially nervous when pressed, but disappointingly both Lederman and then Kellock failed to take advantage from promising free-kick positions with tame efforts. At the other end, Kyri Pittalis had to be alert to collect a number of through-balls, but otherwise Ward and Callum Barrett looked secure enough and the Harrow goal survived to the break unbreached.

Conti von Hirsch returned to action in an OHAFC shirt for the first time in five seasons, replacing Azhar Khan on the half-hour, but no further changes were made at the break. Five minutes into the second half, however, the home side were forced into a unplanned switch when Lederman was forced off with a sore groin, Khan returning to the fray.

Despite the scrappy football continuing, a rare moment of magic from the visitors pierced the gloom as, almost from nowhere, a midfielder produced a superb thirty-yard strike that flew into the top corner, the ball fading on the wind in a perfect arc past a static Pittalis in the Harrow goal.

The home side were momentarily shocked, but showed their resolve and within a few minutes were back in front. Excellent build-up play down the left saw a corner won and Miles Kellock’s whipped ball to the near post was headed in superbly by a leaping Max Curry.

The Blues now had the conviction that this was a game to be won and although there was little to admire for those watching on the sidelines (which pleasingly included former Matron Gillian Whitmee), it was the home side that always appeared in control. Max Curry’s improved fitness, owing to a half marathon run last week, showed in a typically industrious display in attack and he was joined by the equally tireless Alexi Pittalis, enjoying the freedom of a more advanced role to surge forwards at every opportunity. With Tristan David and Miles Kellock looking lively out wide, there was just enough to suggest a third Harrow goal might arrive to secure the win.

As it turned out, it took until the 85th minute for the clincher to arrive and, once more, it was very much a case of route one, with this time a free-kick from Geoff Taunton Collins just inside the Cholms half flying over the retreating back four allowing Pittalis to run on and flick the ball astutely past the outstretched leg of the keeper and into the bottom corner.

The closing stages were seen out without any further drama, although the goalscorer did collect a late yellow card for tangling with an opponent. It was a minor footnote in what had been a fairly forgettable game of football. For the OHAFC 2s, the result on this occasion was far more important.