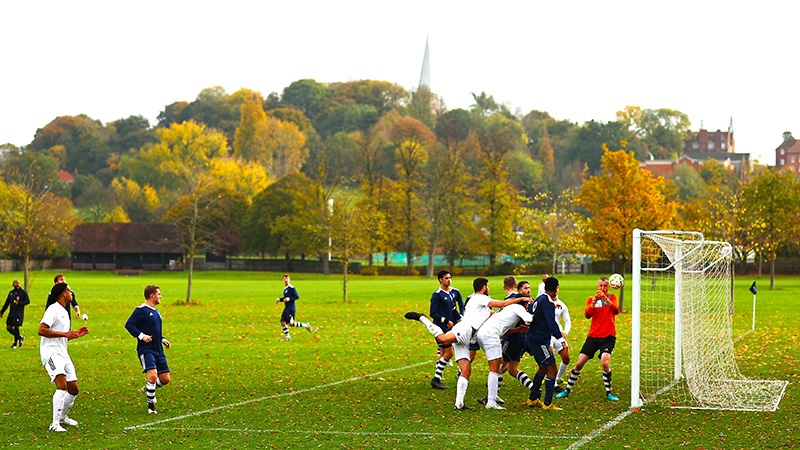 The OHAFC 2nd XI’s four-game unbeaten run came to a disappointing end on Saturday morning as they fell to a slightly underwhelming 2-0 defeat at home to a decent Old Alleynians 2s side. The hosts struggled for much of the first half, falling behind to a header from a free-kick that crashed against the crossbar before being scrambled over the line and a superb long-range effort that flew into the top corner from over 30 yards out. The second half was a different story, the Blues’ performance markedly improved from what had gone before. But chances proved difficult to forge against a powerful, well-organsied Alleynians back four and the visitors saw out the game with minimal fuss.

The two sides had met twice previously in Division Two, the Alleynians winning both encounters and preventing a Harrow goal in either fixture. And in a rather low key first half, this never looked likely to change. The visitors, playing in their crisp, all-white strip, played with a pace and intensity that, at times, the home side found hard to live with.

A fairly even opening saw both sides force free-kicks in their opponents’ final third, but the final finish lacked accuracy at either end. But after a quarter of an hour, the Alleynians won another free-kick on their left and from it they opened the scoring: the ball was curled towards the back post and met with a thumping header that crashed against the Harrow crossbar – the ball bounced down and was then forced over the line by the same player who had headed it.

The remainder of the first half saw the Alleynians enjoy plenty of possession, sporadically threatening to find a way through a hard-working Harrow back four. But they were, by and large, frustrated in their efforts, with keeper Rory Craig, who turned in a Man of the Match display in last week’s 2-2 draw In Chigwell, relatively untroubled. A rejigged Harrow midfield that included Azhar Khan, Max Curry and the returning Giles Newton, who hadn’t pulled on an OHAFC shirt since scoring a spectacular goal for the 2s in a 3-0 win at Eton back in 2018, struggled to keep possession long enough to free wide men Kellock and David, although the opposition’s sharpness without the ball was equally impressive. Such was the lethargy in Harrow’s play, it took until the 37th minute for the stand-in goalkeeper to be tested, despite clear instructions prior to kick-off to get shots on target.

Despite this rather tepid display, it appeared that the Blues would make it to half-time trailing by just a solitary goal. But those hopes were dashed a couple of minutes later courtesy of a superb long-range strike that took Craig slightly by surprise, the ball flying into the top right corner from over thirty yards out. It could have been worse. A minute before the break a sweeping Alleynians move down their right wing saw the ball squared across the box but the finish was placed just wide of the far post.

Skipper Geoff Taunton-Collins had already rung the changes, with Karl Obi entering the fray following his impressive performance the previous week. And there was another returning face in the shape of John Portal – again someone who hasn’t played nearly enough for the club – who joined Curry and Newton in midfield. Disappointingly, Obi had to be withdrawn barely fifteen minutes after coming on, Pablo Hutchinson’s determination to enjoy some rest in the past couple of matches currently being thwarted by the youngster with annoying regularity. Nevertheless, following some relatively strong words at the break, the OHAFC returned a vastly different proposition for their opponents. Suddenly it was the home side who were quicker to the ball, more aggressive in the challenge and playing with a determination and skilfulness that had been lacking in the first half.

It took fewer than five minutes for the first chance to arrive, a lovely move down the right that saw Portal clip the ball over the top for Kellock to run onto, his cross was collected by David who then teed up Doug Pratt, of all people, to charge onto only to fire his shot straight into an Alleynian. But the momentum was now with the hosts and confidence levels rose accordingly.

Ward headed just wide from a corner, Portal and Curry both unleashed decent long-range efforts – this was now a proper contest. The Alleynians second stand-in keeper of the match then produced a superb diving save low to his right to turn a Hutchinson header just past the post following another excellent move down the right. John Portal headed just wide from the resulting corner. Indeed, such was the dominance of Harrow’s play, the visitors began arguing vociferously amongst themselves, having to be told to calm down by the scorer of the wonderful long-range effort.

At this stage, it was clear that a Harrow goal would make them favourites to earn at least a point, the Alleynians almost unrecognisable from the slick, constant motion machine that had prevailed in the first half. But to the visitors’ credit, they gradually began to stem the flow of Harrow pressure as the half wore on, the stream of chances created by the home side now resembling a trickle. Kellock had a free-kick turned over the bar, Doug Pratt again finding his effort blocked at the vital moment.

But the Alleynians threatened too, Craig diving low to his right to make a fairly comfortable save, then repositioning himself excellently after a deflected shot appeared destined to loop over him and under the bar.

In amongst all of this came a deeply concerning moment, as skipper Geoff Taunton-Collins fell to the floor clutching his knee in agony following a rather hefty challenge from an opponent. The scream of pain could be heard right across the Phil ground and it took the Harrovian five minutes before he was able to limp off the field, fortunately able to allay fears this was the same knee he required major surgery on a couple of years ago. The full extent of the damage remains to be seen, with everyone clearly hoping it is nothing more serious than a slight twist.

Azhar Khan replaced his captain for the final twenty minutes but there were few chances of note created by either side in the final stages, the Alleynians holding on for their third win of the seaon, consigning the Blues to a third defeat. Having played for seven weeks in a row, perhaps now is a good time for the OHAFC to enjoy a small break, with no games scheduled for the next two weekends. Certainly, the opportunity to recover several players from injury will be most welcome.