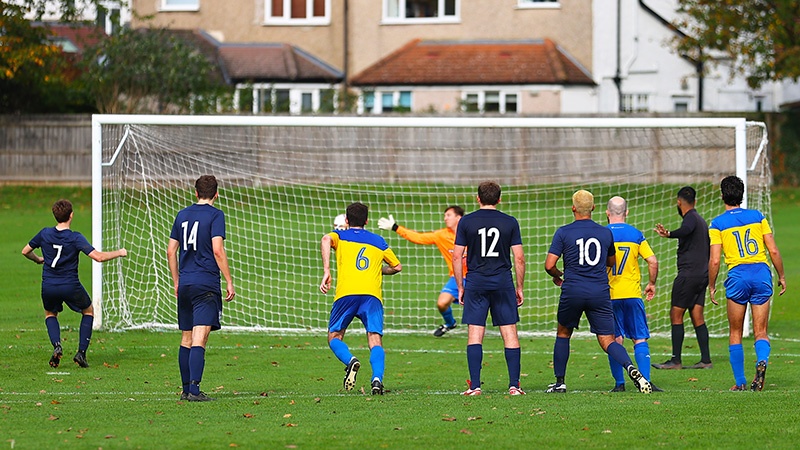 The OHAFC 3rd XI extended their winning streak to three games with a come-from-behind win against the Old Ardinians 2s on Saturday morning on the Hill. Despite falling behind midway through the first half, the Blues responded with goals from Luke Berry and Adam Graham to lead 2-1 at the break. Jamie Jordache’s twice-taken penalty with twenty minutes remaining sealed the victory and sent the Blues up to third in Division Four of the Arthurian League. It was the side's third consecutive League win - the first time that has been achieved since the 2018/19 season.

With two wins and just a solitary defeat in their previous five games, confidence is high among the squad and skipper Tom Mitchell had few problems in enticing a full rota of fourteen up to the Hill for the now regular 10.30am kick-off against an Ardinians 2s side enjoying their first season in Division Four following promotion back in April.

Conditions on the Hill were ideal, although scarring of the drainage channels still affects Phil 2 quite badly, the surface in some areas vastly inferior to the adjoining pitch. Nevertheless, despite playing into a slight breeze and up the slope that runs away from the Alcock Pavilion in the first half, the Blues started well, imposing themselves on the game and enjoying the better of things in an industrious opening spell that saw plenty of endeavour but a distinct lack of goalmouth action – only the final ball was lacking.

The Ardinians gradually found their feet, however, their pacey right winger getting in behind the Harrow back four on several occasions and creating a couple of half chances. And with twenty-five minutes played the visitors took the lead from a very similar situation, this time the right-back storming forwards to deliver a cross into the box for the giant 6’7” striker to head home into the bottom corner.

The goal seemed to spark the hosts back into life and for the remainder of the half they enjoyed the better of things, taking advantage of their spell in the ascendency to score twice and head into the break on top, both on the pitch and on the scoreboard. The equaliser arrived just after the half-hour, Olly Roberts raiding down the right before squaring for Luke Berry to fire home. Eight minutes later and Roberts produced almost a carbon copy of an assist, this time cutting the ball back from the goal line for Adam Graham to score.

Gev Arnsberg and Henry Collins were introduced at the break, with skipper Mitchell rotating his team throughout the second half in a bid to keep legs fresh and minds rested. Now playing down the slope and with the wind behind them, the Blues started brightly and were soon creating chances again.

But the outcome of the game turned in the space of ten minutes with two goalmouth incidents at opposite ends of the pitch. The visitors came mightily close to levelling when the goalscorer cut in from the right and smashed a low left-foot shot on goal, Mitchell flinging himself to his left to palm the effort past the post. Then, moments later, the Blues broke downfield and forced a corner. Roberts whipped the ball in and the flick on inadvertently struck an Ardinian on the arm, referee Mohammed Shohel pointing to the spot. It proved one of the more dramatic penalties in OHAFC history as, for the first time since a Dunn Cup match in 2014, a retake was ordered. Jamie Jordache planted his first effort beautifully into the corner, but was asked to repeat the skill after Adam Graham was adjudged to have encroached. Second time around, under slightly more pressure, Jordache went straight down the middle, the keeper unable to react in time to a shot that was only just out of reach.

It proved more than enough however, with the home side able to see out the remainder of the game in some comfort. The win lifts the self-styled ‘Panthers’ up into third in the table, and although they have played more games than anyone in the Division – in fact, more than any other side in the entire Arthurian League – there is a growing confidence going into the second half of the fixture list.

The side face a stern test next weekend however, with a trip north to face a rejuvenated Old Haberdashers side. Habs sit one place above the 3s in the table and have lost only once in their six matches played. Both sides are swimming in the slipstream of a King’s Scholars side with a perfect record of four wins from four. There is still much to play for in Division Four.