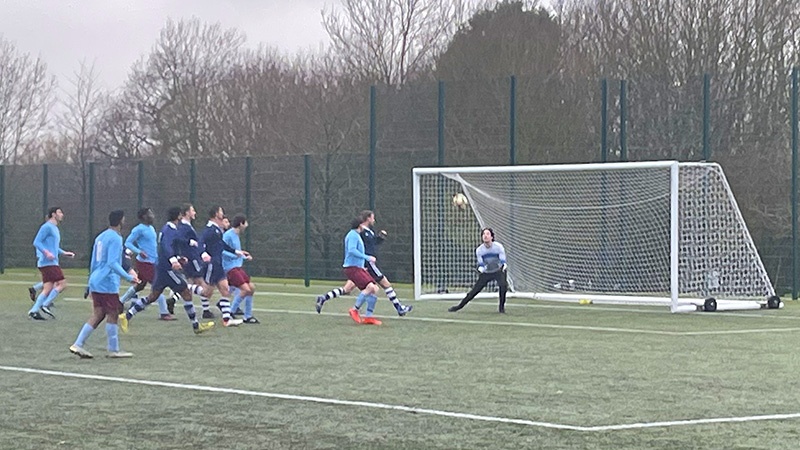 A new year, but the problems continue for the OHAFC 2nd XI, who succumbed in meek fashion to a rampant Old Cholmeleians 2s side on the astroturf at Rowley Lane in Arkley on Saturday afternoon. In the Blues’ first outing since the winter break, the visitors battled hard into a strong wind in the first half and at 1-0 down five minutes before half-time, seemed to be well in the game. But sloppy goals either side of the break saw the hosts open up a three-goal lead and, as the visitors tired in the latter stages, Cholms eased through the gears to add two late efforts to round off a strong team display. Worryingly for the OHAFC, that’s now four defeats in their last five League games, and seventeen goals conceded in the previous four. An upturn in performances and results is badly needed.

Although it had been a full month since the Blues last took to the field, a disappointing 4-1 defeat down in Kent against the Old Sennockians, there was optimism ahead of this first clash of 2023, with skipper Geoff Taunton-Collins able to name a full, strong squad of fourteen for the trip north. And the Blues had already secured a 3-1 victory over their opponents, promoted last season from Division Three, back in mid-October – Max Curry, who played as the lone striker on Saturday, scoring twice in that game.

Conditions at London Lions’ smart complex were tricky, with intermittent rain and a strong breeze blowing towards one end of the artificial pitch. The visitors opted to play into the wind in the first half, hoping to remain in the game at the break before utilising their superior numbers to wear their opponents down as the game progressed.

The start was, as could be expected, a hesitant one from the visitors, in contrast to a Cholms side who appeared to have spent most of their Christmas break on the training ground: the hosts were quicker into the challenge, more effervescent in their movement and crisper with their passing. With the strong wind blowing into their faces, the visitors tried to play their way out of trouble, with varying degrees of success. On several occasions players were either caught on the ball or played a teammate into trouble, Lederman hacking a header from a corner off the line before nearly undoing his good work by putting Rory Craig under undue pressure with a tight back pass right in front of the goal.

After the initial rustiness appeared to have worn off slightly, the Blues did manage to work their way up the pitch to decent effect. Tristan David was played in down the left on several occasions and delivered a couple of useful crosses, but on the large pitch it was a struggle for his teammates to support him and Cholms always had spare men covering. Max Curry ploughed his lone furrow with typical effort, but his half-time complaint of too few passes going to his feet was a fair one, the Cholms keeper left without a save to make in the first forty-five minutes.

Cholms continued to look threatening going forwards, their quick, direct left winger of considerable note, as was the constant stream of long balls fired in his direction from the Cholms skipper. And this proved to be Harrow’s undoing for the opening goal just before the half-hour mark: a long ball was slightly misjudged by right-back Doug Pratt, the ball skimming off his head and into the path of the winger. He carried the ball in on goal but his effort was a weak one, only for Craig to spill the ball back to him, allowing a simple finish from the rebound.

But the Blues appeared to have done enough to achieve the first part of their gameplan, going into the break still in the game, until, five minutes before the interval, some slack marking from a corner allowed a free header back across goal and two Cholmeleians waiting to pounce from a couple of yards out, the skipper getting the final touch.

Despite this, there was still optimism at the break that with the wind now in their favour, the second forty-five minutes could prove decisive. Skipper Taunton-Collins rang the changes with all three subs introduced. Somewhat worryingly, it was long-time keeper Kyri Pittalis, on at right-back, who appeared sharpest out of all the Harrow men, snapping into challenges with aggression and doing his best to launch his team forwards down the right in a display that put many of his teammates to shame.

Indeed, the Blues started the half well, although the Cholms keeper could still have been sitting in an armchair for all the goal threat Harrow carried. Then, with ten minutes played, disaster struck as a poor cross from the Cholms right somehow flew all the way over keeper Rory Craig and in off the far post. As lucky as the goal was, it was hard to argue against the scoreline, with the visitors continuing to look second best for much of the game and, frustratingly, continuing to struggle to defend set-pieces.

A neat move saw Max Curry spurn two excellent chances in quick succession as a cross from the right saw him finally work the keeper, but given the scoreline a goal had to come. The Cholms skipper then took centre-stage, wiping out Pittalis with a totally unnecessary challenge on the touchline and finding his way into the referee’s notebook, before popping up with a penalty late on to complete his hat-trick – Doug Pratt felling the pacey left winger right on the edge of the box as he ran onto a long ball over the top. In between, Cholms scored their fourth, a goal that owed everything to the winger as he danced past two or three Harrow defenders down the left before squaring for an unmarked player at the far post.

Tristan David thumped a shot against the foot of the post in the closing moments, but it was far too little, far too late for a well-beaten Harrow side who finished the game poorly: out-played and out-muscled by a far superior Cholms team.

The fixture list has not been kind to the Blues at the start of the year, with a series of tough away games in quick succession: Kimboltonians, Etonians and Alleynians are unlikely to prove any easier than Cholms did on Saturday, so the Harrow 2s must improve dramatically if the season is not to end in significant disappointment.