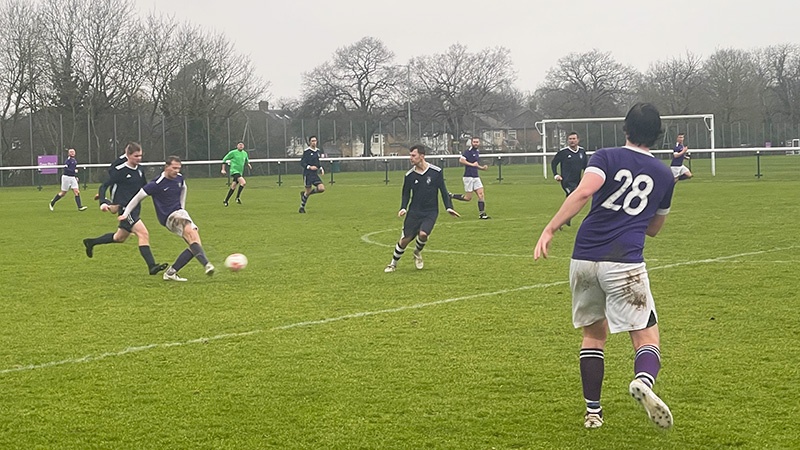 Despite a much-improved performance from the previous week, the OHAFC 2nd XI still came up well short against an excellent Old Kimboltonians 1st XI on Saturday afternoon. In a game played in awful conditions at the University of Hertfordshire, the hosts dominated the first half and led 4-0 at the break, although they were helped on their way with some rather soft goals offered up by the visitors. To their credit, the OHAFC battled hard after the break, scoring the only goal when Doug Pratt headed in a Miles Kellock corner from close range with just under a quarter of an hour remaining. But the Blues have now lost five of their last six games and face the very real threat of relegation unless a significant change in fortune can be engineered.

With the whole squad who featured in the previous week’s awful 5-0 defeat away to Cholms 2s in agreement that change was required, the thirteen who travelled north in the rain were determined to put on a better showing. Nine of the side returned, with first appearances of the season for substitutes Stan D’Angelin and Matthew Harrison. Miles Kellock added guile to the left wing and there was a big plus for skipper Geoff Taunton-Collins with the return from injury of stalward Alexi Pittalis – he was forced to play up front, with none of the regular forwards available. Disappointingly, both vice-captains, Tom Ward and Max Curry, missed out through injury.

Kimboltonians had won the previous meeting between the sides 3-1 on the Hill in a rather scrappy contest and they began brightly here, on a pitch that initially held up well despite the constant threat of rain in the air. The visitors had won the toss and, in contrast to last week, opted to play with the wind behind them in the first half. But the hosts quickly settled into a rhythm, passing the ball with speed down both flanks and looking threatening from the off. In contrast, the OHAFC seemed caught in two minds, unsure whether they should push up the pitch to try to close down their opponents, or sit back and restrict space in behind. The result was that far too often, the blue shirts were left trying to defend two thirds of the pitch and the Kimboltonians took full advantage of the space afforded to them.

After a quarter of an hour solidly working to stay with their opponents, the visitors began to show a few signs of venturing forwards, with Kellock freed a couple of times down the left and Doug Pratt producing a barnstorming run through the middle that saw him shrug off several challenges, sending one of the centre-halves flying, before stumbling when he got to the edge of the box, the final shot of insufficient quality to test the keeper.

With twenty minutes played and the sides still goalless, there was some hope that the visitors could reach the half still just about in touch with their opponents. But that hope evaporated in an awful fifteen-minute spell midway through the half that saw Kimboltons score three times, twice from the penalty spot. The first goal was unfortunate, a corner was delivered beyond the far post and although a Harrow head got to the ball first, the challenging attacker did enough to force the ball down and across goal, allowing a simple finish from close-range.

The Blues then shot themselves in the foot with a couple of scrappy challenges inside the box: keeper Rory Craig initially came for a through-ball then stopped, the final challenge a fraction too late and the penalty superbly dispatched just inside the left post; five minutes later and it was right-back Kyri Pittalis’ turn to commit the foul, although this was a far more questionable offence, with the defender clearly winning the ball cleanly, although the referee believed he had come through the back of the attacker – the fact that several Kimbolton players intimated it looked a very harsh decision probably tells its own story. Nevertheless, the same player stepped up and fired the ball into exactly the same spot, despite the Harrow keeper again guessing the right way.

It was now an uphill struggle for the Blues, who enjoyed several decent spells inside the attacking third, without ever really looking capable of hurting their opponents. The final ball invariably missed the target, several set-pieces were wasted.

A fourth Kimbolton goal arrived ten minutes before the break, the best of the lot as a sweeping counter-attack saw the ball switched from right to left and the winger producing a fine first-time effort inside the far post as defenders scurried back to block.

The half-time team-talk was given in pouring rain but skipper Taunton-Collins implored his troops to keep going and set the target of winning the second half to restore some pride. To their credit, the Blues did just that, Doug Pratt scoring the only goal with a near-post header from a Miles Kellock corner with just over ten minutes remaining. It was just reward for a side that knew they were beaten, but kept at it throughout.

Indeed, as the pitch began to cut up and the rain continued to drive down, the game developed into a rather feisty encounter, with players from both sides ending up in referee Stephen Rawlinson’s book. There seemed to be some inconsistency in the way the bookings were dished out, with both Callum Barrett and Doug Pratt penalised when worse offences seemed to have been committed. The constant kicking away of the ball also grated, but in the end the visitors could have few complaints at the final result.

Two further stern away tests are pencilled in for the next three weeks, with a trip to Eton up next before the Old Alleynians 2s in early February. The OHAFC must keep plugging away, with their recent record at Eton offering plenty of encouragement ahead of next week’s encounter.