OHAFC hold on to secure vital win against fellow strugglers 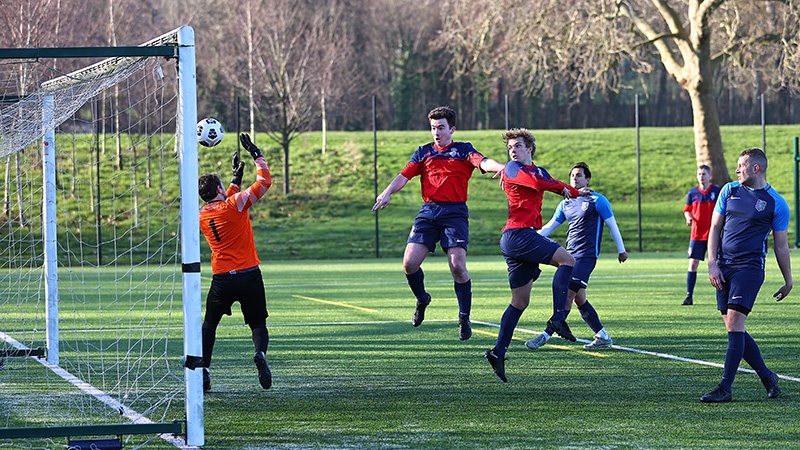 The OHAFC 1st XI produced an excellent performance on Saturday morning to earn three vital points against fellow Division One strugglers the Old Berkhamstedians on a frosty Harrow School astroturf. The home side always seemed in control of the destiny of the game from the eighth minute, when skipper Dan Firoozan delivered a long free-kick straight into the top corner. Firoozan doubled Harrow’s lead from the spot and Ed Beecham headed in on the stroke of half-time to earn the hosts a 3-1 lead, Berkhamsted’s effort also coming via a penalty. Will Swan curled in a delightful fourth early in the second half to seemingly put the result beyond doubt, but the visitors kept plugging away. Arthur Leney and George Taylor scored two excellent goals, but Berkhamsted produced a late flurry to reduce the arrears to 6-4, the hosts holding on to secure an important win that carries them into relative safety in mid-table.

Despite last weekend's defeat to the League leaders, the Old Chigwellians, skipper Firoozan kept faith with the new attacking 4-2-4 formation that aims to squeeze the most from the young, quick, forward quartet of Will Payne, Arthur Leney, George Taylor and Ollie Atkinson. The captain was tasked with holding the midfield along with Murray Barr, with a solid looking back four of Will Swan, Ed Beecham, Ed Nicholson and Stan d’Angelin, playing slightly out of position on the left. The two sides had fought out a breathtaking 4-4 draw down in Tolworth earlier in the season and the visitors knew that a win here on the Hill would take them level on points in the bid to avoid the drop – Lancing Old Boys already look as though their goose has been well and truly cooked, with ten consecutive defeats suggesting they will be playing in Division Two next season.

On a gorgeous winter’s day on the Hill, a frantic opening quarter of an hour saw plenty of hustle and bustle but little football of real quality. The Harrow skipper was coy after the game about whether or not he meant his early opener, simply remarking that he was trying to ‘put it in a good area.’ The ball flew from fully forty yards out straight into the top corner, so it turned out to be a very good area indeed, the slightly under-sized Berks keeper failing to get anywhere near it.

The game continued in a rather frantic manner, although the home side always looked the more composed on the ball, trying to free wide men Payne and Atkinson whenever possible. But once the pace dropped slightly, it was the visitors who began to impose themselves on proceedings and they enjoyed a promising ten-minute spell during which they were camped in the Harrow half. Several shots were fired on the Harrow goal, one of which crashed into the foot of the post, bounced across goal before the rebound was hacked clear by Nicholson. The next attack came down the Harrow left, McGuinness making a relatively comfortable save from the resulting effort.

Fortunately for the home side, the lead remained intact during this tricky spell and from almost nowhere the Blues were gifted the chance to extend their advantage when a rather hopeful punt into the box saw George Taylor needlessly barged over from behind. Referee Tony Anderson pointed to the spot and the skipper sent the Berkhamsteds keeper the wrong way to score his, and Harrow’s, second goal.

The remainder of the half was fairly evenly contested with neither side able to build up a head of steam. But there was still time for two further goals. The visitors were gifted the chance to get back into the game when they were awarded an extremely soft penalty five minutes before the break: a long shot was drilled into Stan D’Angelin’s arm from close range right on the edge of the box, but the referee again pointed to the spot – McGuinness went the right way but the penalty was expertly fired into the bottom corner. But right on the stroke of half-time, the hosts forced a corner on the right, Firoozan clipped the ball into the near post and Beecham rose highest to thump a header into the roof of the net.

With only a bare eleven to call upon, there were no personnel changes available to the Harrow skipper. Instead, minor tactical instructions were issued, with the side asked to calm the play down a bit, use the width of the pitch more and to manage the game accordingly.

Despite this, the second half began at a frantic pace, with both sides creating half-chances. Harrow probed down both flanks but the resulting crosses failed to pick out their man; Berkhamsteds broke up the other end, McGuinness forced to race off his line to clear before making a routine save from a curled effort from the edge of the box. The home side then came within inches of a fourth when Murray Barr delivered a tempting ball over the top for Taylor to run onto, but his dink over the onrushing keeper was cleared off the line by a scrambling defender.

But the home side’s pressure told shortly afterwards, and in some style, when right-back Will Swan collected a throw, carried the ball across the face of the penalty area before curling a beautiful left-foot shot into the far corner. The effort took a slight nick off a defender, but the keeper was beaten as soon as the ball left the Harrow man’s foot. The visitors very nearly responded immediately but D’Angelin made a vital clearance off the line as a shot rolled towards goal, McGuinness then making an excellent low save to his left to deny Berkhamsteds again.

The game continued at a frantic pace, with the referee ever more involved as the foul count built. And the goals continued to flow, with the OHAFC always seeming just a step ahead of their opponents. Arthur Leney made it 5-1 after 65 minutes with a low right-foot finish under the keeper following a storming run through midfield from centre-back Beecham. Berks responded immediately when a free-kick was curled into the box, Harrow dithered and a forward turned in from close range.

With just under a quarter of an hour remaining, a sixth Harrow goal appeared to signal the end of any faint hopes of a comeback, Payne collecting an overhit cross on the left, laying it back to D’Angelin and his fine delivery into the box was headed in by Taylor from five yards out with Firoozan on hand right behind him.

But to the visitors’ credit, they continued to press right until the final whistle, and two late goals made a slightly uncomfortable end to proceedings for the Blues. With nine minutes remaining a scrap inside the Harrow penalty area ended with a close-range finish to make it 6-3, four minutes later a cross from the right was expertly turned in first-time as Harrow’s defending began to look rather ragged.

Fortunately, despite further pressure from the visitors in the closing minutes, the Blues held on without alarm to claim three vital points. Harrow now sit seventh in the table, six points above the relegation zone, with two fixtures against bottom-placed Lancing. Victories in both of those, whilst hardly a foregone conclusion, would surely see the side safe in Division One for another season.