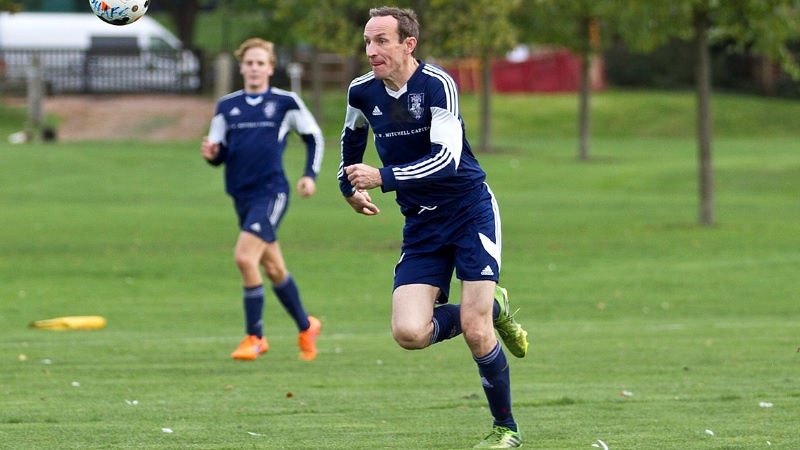 The second half of the Hoffen brotherly strike pairing, Harry has been the leading striker for the OHAFC 1st XI for two decades now. Blessed with blistering pace and excellent dribbling ability, he has terrorised defences for many years and has regularly topped the club scoring charts.

Harry came into the side in the mid-1990’s and played sporadically for the 1st XI before, as with so many of his contemporaries, really finding his feet during the First Division title-winning campaign in 1999/2000.

Once in the Premier Division, Harry quickly earned a reputation as a striker to be feared, defences regularly dropping deeper to counter his whippet-like pace, which in turn allowed more space for the rest of the side to operate in. He topped the scoring charts for the 1st XI more often than not, possessing a somewhat annoying tendency to score spectacularly from impossible angles, only to miss one-on-ones or simple tap-ins.

Nevertheless, Harry came up trumps in the Dunn Cup quarter-final of 2006/7, scoring twice late on to defeat Charterhouse on their own ground and set the side on their way to the trophy. By this time, Harry had represented the Arthurian League Rep side on many occasions and become the first, and to this day only, Old Harrovian to earn his AFA Representative tie, having played for the team on five occasions.

Harry once again topped the scoring charts in the title-winning season of 2009/10, scoring eight goals along with Lederman and Martins, and early in 2011/12 set yet another club record when he smashed five goals in less than 8 minutes past a hapless Epsom side in the Dunn Cup first round. He completed a double hat-trick late on, the only one scored by an OHAFC player in the last twenty years.

Harry also achieved a notable treble of victories in the Jubilee Five-a-Side Cup between 1999 and 2002, becoming only the second OH to win the competition three times after Mark Baddeley.

Early summer in 2012 saw Harry suffer a serious abdominal injury which kept him sidelined for the majority of the 2012/13 season - he managed just six appearances for the side, scoring twice.

He was back in action in 2013/14 but again injury restricted his appearances but not his goal threat - a hat-trick in the 6-1 demolition of Brentwood saw him end the campaign with seven goals from eight appearances and he even made his third ever tour, helping integrate some younger members of the travelling party in Hamburg.

Harry made 11 appearances in the relegation campaign of 2014/15, scoring five goals, remarkably none coming after the end of October.

But despite nearing his 40th birthday he continued his remarkable scoring record in 2015/16, making 17 appearances in the promotion-winning season and scoring ten times, including a hat-trick in the 10-1 demolition of Haileybury.

Sadly, with the side aiming to make a strong start to life in the Premier Division in 2016/17, Harry suffered a knee injury in the opening game of the season against Eton, ruling him out for the next two months. Combined with time abroad over Christmas the New Year, he ended the season with just six appearances under his belt and a single goal.

2017/18 was a similar story with sporadic appearances for the 1s under new skipper Yunus Sert, often playing just 45 minutes or less each time. He was still looking for his first goal as the 1s entered their final four games of the season.

1) Which football team do you support?
Arsenal