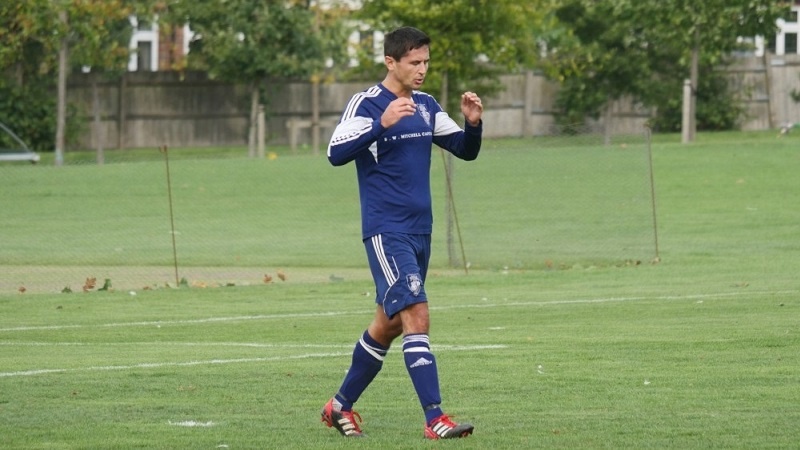 Another supremely talented sportsman to have come through the ranks in the late 1990’s, Paul has been one of the main contributors to the success of not just the OHAFC 1st XI but also the Club over the past two decades.

A holding midfielder when he began playing for the club in the mid-1990’s, Paul possesses superb technique and a magnificent passing range, allowing him to find teammates whether five or fifty yards away. Whilst not the quickest, his reading of the game allows him to dictate matches and give Harrow’s football a flow and rhythm. He regularly contributed with assists and poses a threat at set-pieces, although the early flow of goals has in recent years become a steady drip.

One of the more engaging characters in the club, Molloy’s ability to extricate himself from trouble on and off the field, regardless of blame, is legendary. But everyone had good reason to celebrate when he scored a magnificent 25-yard volley to earn Harrow a 1-0 win over Bradfield in the 2007 Arthur Dunn Cup Final, their first victory in the competition. A fact Paul has never let anyone forget since!

Off the field, Paul held the position of Club Secretary for eight seasons between 2001 and 2009, he won the Jubilee Cup in 2007 and a year later was honoured with the Charles Clover Brown Award for his all-round contribution to the club. He also turned out regularly for the Arthurian League Rep side and continually showed his class at the higher level.

As age (and kids) began to take their toll, Paul found himself used increasingly at centre-half where his knowledge of the game and aerial ability once again added a certain level of security to the back four. He was a regular member of the side that won the Premier Division title in 2010 and although he missed nearly the whole of the following season with a knee injury, he was back in action at the start of 2011/12, once more eager to impress.

Paul made 14 starts in the 2011/12 season, scoring twice and enjoyed more minutes on the pitch than all but three of the squad.

Despite the arrival of twins, Paul still managed to turn out eight times for the side in 2012/13, scoring once, but since then his appearances have been rather more limited by his parental duties. He played just three times in 2013/14, five times in the relegation campaign the following season and made four appearances in 2015/16 season as the side won promotion back at the first attempt.

He continued his run of appearing in every season since his debut with three more appearances for the 1s in 2016/17 and, at the age of 40, was again asked to turn out as the side faced a crunch clash with Berkhamstedians in January 2018.

He remains an outstanding footballer and has been a key contributor to the Veterans' run of success in recent seasons, culminating in the Cup wins of 2012 and 2016.

1) Which football team do you support?
Man Utd
2) Who was your favourite player growing up?
Bryan Robson & Ryan Giggs
3) Which boots do you wear?
adidas Predators
4) What is your usual pre-match meal?
Bacon butty
5) Best moment on a football pitch? (OHAFC or otherwise)
Winning the Dunn Cup when I scored the winner from 30 yards (we hadn't heard)