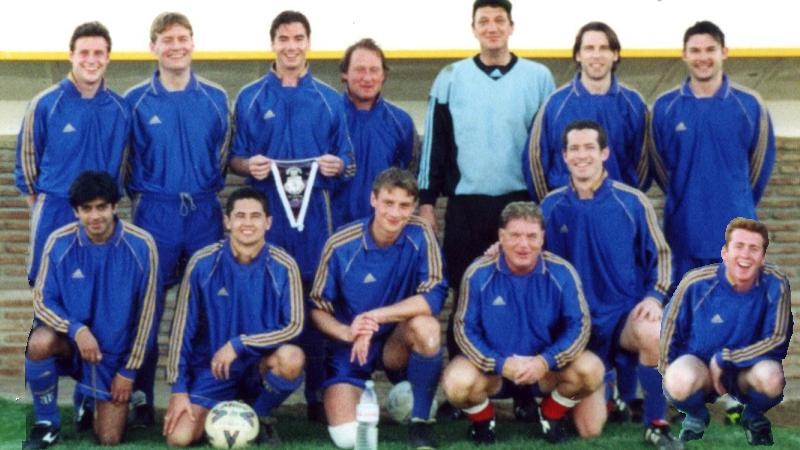 The Millennium Tour to Puerto Banus was superbly organized by Nick Warner, along with the help of local ‘Mr Fixit’ Georgie Gray, whose daughter bore a striking resemblance to Anna Kournikova. Disappointingly, Georgie quickly informed us that she was off the market, her current beau being a local toreador!

Nick arranged for the tour party to share some lovely apartments close to the beach and local nightlife. Despite the excellent facilities, it didn’t stop the Molloy/Baker/Dalton house from cooking together what later they described as the most disgusting meal they had ever eaten, a pasta concoction made with Dairylea cheese triangles.

The football matched the quality of the accommodation, with three games arranged at the stadium of local Third Division side UD San Pedro, a half-hour coach ride from the centre of town. All the games were played as the sun set under floodlights and all agreed that this was a setup befitting the stature of the OHAFC.

The first match saw the tourists run out comfortable winners against the San Pedro youth side. The second game, played on the Wednesday night, was a much stiffer test against the reserves. Harrow had the help of a German professional who was on trial at the club, although he was far too quick for anyone to pass the ball to him accurately. In the second half the opposition brought on their own star player, a veteran midfielder who the season before had been playing in the Primera Liga for Real Betis. Sadly, the hosts proved too strong and ran out 2-0 winners. In the bar afterwards the Champions League quarter-final between Manchester United and Real Madrid was showing. Lederman got very excited when Redondo’s back heel helped set up Raul for the decisive third Madrid goal – he had arrived at the game dressed in his own Madrid shirt with Redondo’s name and number of the back – something the locals much appreciated.

By the time of the final match on the Friday night, the squad was in no fit state to play football, after nearly a week of ‘sight-seeing’. Half the team arrived five minutes before kick-off yet somehow Harrow struggled to a commendable 2-2 draw against a mixture of San Pedro players young and old.

Off-the-field highlights included Rupert Hoffen joining the tour late, dressed in an olive green suit in an absurd bid to get an upgrade on Easyjet; a slightly-the-worse-for-wear Andy Butler crashing into a table in a nightclub moments after arriving and spilling everyone’s drinks; and Robert Worthy surrounding himself with some dubious Russian women in Napoleon’s Piano Bar, yet still protesting that it was the hottest bar on the strip.