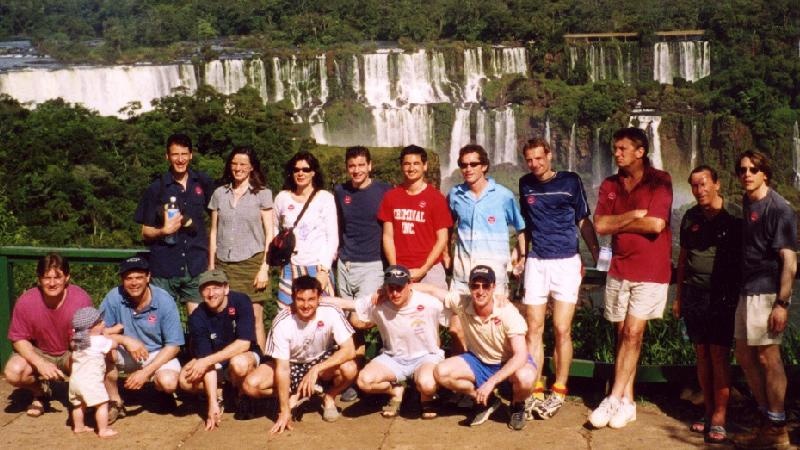 Forty years on from the re-establishment of OHAFC in 1963, a decision was taken to relocate the annual Easter tour a little further afield than usual, and South America presented itself as an appropriate place to test out the flamboyant talents of a 16-strong touring party over two weeks in early May.

The trip began with a weekend in Buenos Aires and a game on the Sunday against the staff and Old Boys of St George’s College, a smart English school situated in the suburb of Quilmes. The day was memorable partly for some stunning, open football played in glorious weather and magnificent surroundings, in a match which OHAFC won 6-4, but mainly for an all-day post-match barbecue which left even the most hardened OH carnivores slack-jawed with delight. Indeed, beef was to be pretty much the only thing eaten in the first week of the trip with the steaks of Argentina and the BBQ’s of Rio of a standard not previously experienced.

Tearing ourselves away from BA was not easy, but tear we had to, and were rewarded with two stunning days in Iguacu, visiting the famous waterfalls on the Brazilian border. Highlights included the raft trip into the heart of the falls and spotting various exotic wildlife, including a small, furry armadillo with the body of a raccoon and the head of a large rat. Football was limited to intra-squad games on the hotel tennis court where the stiffest opposition was provided by jungle insects who not only “bit yer ankles” but much else besides.

From there we flew on to Rio and discovered with a degree of trepidation that our two mid-week fixtures were to be played on the soft sand of Copacabana beach against teenagers trained by Rio super-club Flamengo. New kit had to be purchased: Charlie Tweddle was somehow chosen to do this and lucked out when, with little more than an hour to kick-off, he spotted a local wandering along the street clutching a load of navy blue singlets.

Back on the beach, certain minor adaptations had to be made to the traditional OH style of play, including keeping the ball off the ground at all times and not attempting to run with it, or pass it more than three yards. Incapable as most members of the party were of more than three keepy-uppies in a pre-match warm up on the Phil, we unsurprisingly struggled, until we discovered that Bert Worthy was allowed to pick up back passes and could throw the ball the length of the pitch where the entire team could crowd the area and hope for a flick-on; thus the legendary Harrovian ability to adapt turned a worrying 16-2 deficit into a respectable 19-16 defeat. Few of our goals were pretty and our opponents were bruised and unimpressed, but we took our post-match beers and coconut water with our heads held high.

In the return match the following night, our opponents seemed to have found ways to combat what was fairly obviously our only tactic, but a sudden and timely power cut shut down the floodlights and brought a premature end to a contest intriguingly poised at 12-1 to them. The voice of the late great Bert Worthy boomed out of the darkness “Match abandoned due to floodlight failure; replay, 7.30 next Tuesday, Blackpool Sands”.

There was still time for one more game, on grass the following Saturday, on a pitch located rather dramatically next door to a shanty town. Our surprisingly average opponents allowed us to open up an 8-2 lead midway through the second half – indeed they were so poor, they even allowed Tweddle to score a volley from the edge of the box which he celebrated by shrieking like a little girl.

It was at this point that the locals summoned their friends from over the road to come and help them with the result that in a matter of fifteen minutes the scoreline became something of a guessing game, such was the regularity with which goals were being conceded. The final score was reckoned to be a 10-9 win to the Brazilians, although had injury time been played, it could well have been 100-9.

There was, of course, time for the usual off-pitch nonsense, although it was fitting given the quality of the efforts of most of the party with the local lady-folk that the favoured night club was an establishment called “Help” – most of them needed all the help they could get.