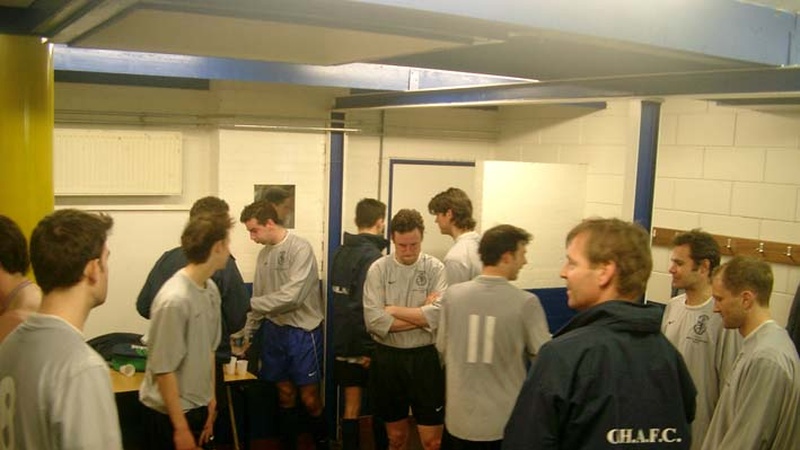 In 2004 the Easter Tour once more returned to it's regular format of a long weekend in Europe, with monkey-armed Piers Bourke leading a 16-strong party back to Amsterdam, scene of the 1996 tour.

James Stafford-Allen was the schoolboy on this occasion and he must have wondered what he had let himself in for on arrival at the Hans Brinke Youth Hostel (or 'Y th ote' as the sign on the building said). A large notice in reception proudly boasted that 'We now have doors on all our rooms'!

A dormitory of ten were soon squabbling over the nine sets of bed clothes available, Jamie Waugh (where was he?) missing out. Meanwhile Messrs Williams, Worthy and Warner all decided they'd seen enough and went to find alternative accomodation.

It didn't take long for the tourists to get into the swing of things however: within ten minutes of heading into town on the first night Paul Molloy had busted a rather sheepish gentleman coming out of an extremely dodgy shop and Harry Hoffen had upset a group of breakdancers by joining in their routine in front of a hundred onlookers and performing something akin to a David Brent dance, finishing with a terrible cartwheel. The startled crowd began to applaud grudgingly before realising they had been hoodwinked.

Two games of football were played, one on astroturf, one on grass. Piers Bourke, as leader of the tour, was asked to join the captain of the opposition in downing a post-match pint after the first game but found the Amstel slightly cold for his liking and nearly fainted in his chair.

Prior to a group supper on the second night, several members of the party went 'exploring' under the guidance of Rowley Higgs and arrived at the restaurant somewhat the worse for wear. Trying to hold a civilised conversation with the likes of Molloy and Reid is hard enough at the best of times, but on this occasion their inability to answer even a basic line of questioning from Worthy left him exasperated and searching for an alternative seat.

An excursion to the Amsterdam Arena proved enjoyable although sadly Ajax were playing away that weekend. It didn't stop Bobby Tindall from interrogating a poor Dutch girl on the train on the way back into town, Bobby's belief that 'all Dutch people are very open about their personal lives' not proving strictly accurate.

Further amusement was provided back at the hostel where Harry Hoffen entertained himself by sending a push bike up and down in the lift, Rupert Hoffen riled Molloy with the now-famous 'lightswitch gag', leaving Lederman crying with laughter, and Quentin Baker struggled to control his bowels in a late night corridor conversation with a couple of back-packers.