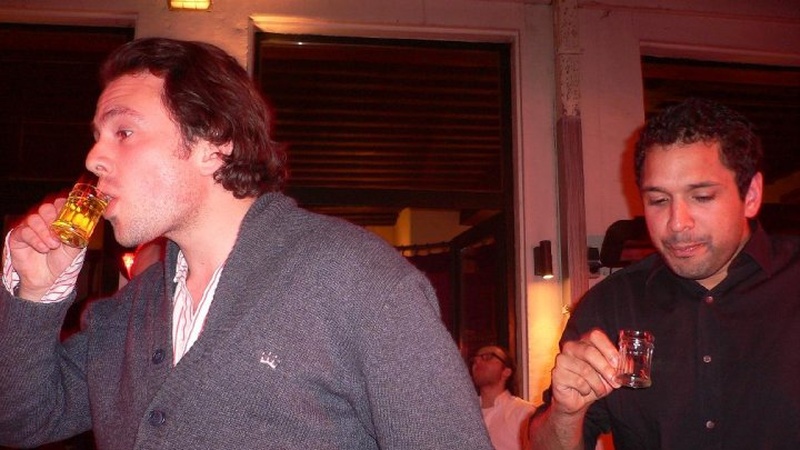 A squad of 17 travelled to Antwerp in April 2010, scene of the 1994 tour. Richardson, Baker and Best kept up their fitness levels by opting to cycle from London, Pritchard became the first OH ever to travel on tour by barge and Woolley made the trip with his broken leg in plaster, keen not to miss out on the fun.

The first night out saw the team wander round the old town in search of fun and frolics. At dinner, Jonathan Best was awarded the 'Bobby Beckwith Scholarship', although minutes after taking possession of the €50 prize he was found slumped against a lamppost fast asleep...

On the pitch, the team lost the first game on penalties thanks to the antics of Malin Hyams (aka Fabio) up front and a skied spot kick from Ed Martins.

Returning to the old town for the evening entertainment, Besty was approached by a Russian Peter Crouch look-a-like who lent him his raincoat and taught him some break-dancing moves. Tindall unsurprisingly began causing problems, his serenading of a lady quietly enjoying some live piano didn't go down well.

Pride was restored after a convincing win in the second game however. Following an unusual stretching routine from Ponniah and the team's completion of 'Forty Years On' in the centre circle just before kick off, the OHAFC went on to win 5-2. Highlights included a 20 yard volleyed goal from Gakic, Raffety (playing outfield) bringing the majority of balls played to him down with his neck like a highly-skilled chicken and an excellent centre back performance from Fred Richardson in his 'Ron Hill' tracksuit bottoms.

The game also set a record for the most times a defender has been caught offside in OHAFC history: Charlie Tweddle, playing at left back, saw the linesman's flag raised an incredible seven times before being substituted. Twedds adds the offside record to his long-held mark of number of headers completed below knee-height. An excellent match tea was provided in the clubhouse afterwards but it was somewhat spoilt by the extraordinary antics of the DJ, who began what can only be described as a 'euro-hard-house-trance' set at full blast despite it being 5 o'clock in the afternoon and there being no-one present apart from the two football teams.

On the final day the tour saw a new concept introduced, The Weird List. This was driven, appropriately enough, by Lederman, who had spent half an hour in Starbucks explaining to Chopra why Castle was his favourite Lego genre. Tindall, however, was crowned the competition's first winner after votes were cast from all tour party members, earning a highly-creditable average score of 9.63 out of 10 for his 'weirdness'.