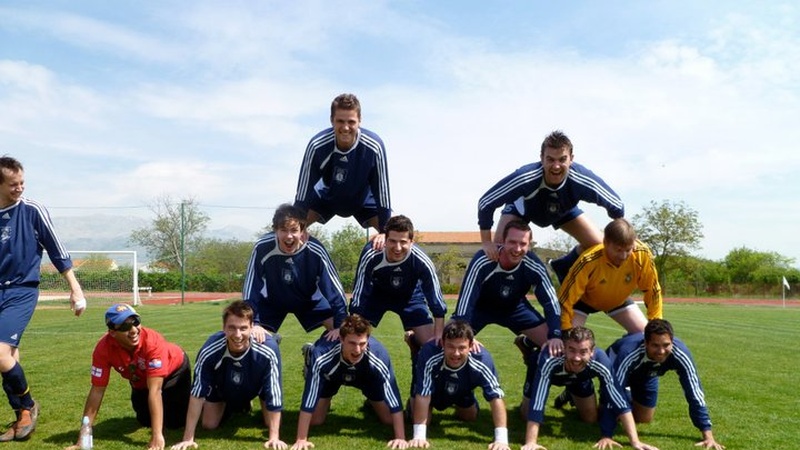 2011 saw the club return to Eastern Europe for the first time since the 'bootleg' tour to Riga in 2005 with a trip to Croatia and the old port city of Split.

Accomodation was in the heart of the old town, fortunately enough right next to a handful of attractive bars - these were quickly emptied however as soon as Tindall stood to tell one of his many 'jokes'.

The first night saw the squad sample the delights of two clubs that were to become their home away from home for the next 72 hours: Vanilla, a superclub located right next door to the stadium of famous Croatian side Hadjuk Split, and Sing-Sing, a grotty, dark, hovel where drinks were served from behind iron railings and signs on the walls stated 'No guns allowed'.

After a few hours sleep, the team travelled to the venue of their first football - a three-team tournament with two local sides, played on a good surface with an athletics track around it. Seeing the facilities on arrival, Reid challenged Martins, the quickest member of the tour party, to a 400m race. Martins enquired as to whether a 100m race might be a better idea. Reid agreed, but predictably then trailed in yards behind a giggling Martins. Reid collapsed behind a goal to review his race and rid his body of the toxins that had built up from the night before. He then startled everybody by deciding to take a shower before any football had been played.

Out on the pitch, a rather relaxed warm up routine hysterically led to the foundation of the first ever 'OHAFC pyramid'. The squad lost both matches blaming 'lack of sleep' and 'collapsed pyramid related injuries'. Notable tournament moments were Pritchard's sublime chip in the first game and Chopra's extraordinary miss from one yard out in the second.

With no football to be played on day three, the squad took a stroll to the beach where, under the gaze of some svelte American girls, a variety of beach games were played using just a ball and various individual's imagination. By now, the squad had the pyramid routine down to a fine art with Woolley the 'angel' on the top of the ten-man tree.

Lunch was pizza and ice-cream, with the pizza girl drawing praise all round for her excellent 'pizza handling' skills.

In the evening, the tour party was treated to some fine Eastern European cuisine and a few too many solos from Tindall. The party returned to Vanilla, where it appeared a new door policy had been introduced for the locals, only allowing in Croats who were at least seven feet tall. Nevertheless, now full of confidence, the tour party took on their most ambitious pyramid yet, in the middle of Vanilla's outdoor terrace, to loud cheers from all.

There was an even louder cheer several hours later when Gibson wandered off only to return with the 'Pizza Girl' in tow. Tweddle led the rousing chorus of 'Pizza Pizza Pizza' (it being his favourite food).

But the star of the tour was undoubtedly Charlie Reid, who consistently took over proceedings with behaviour that reached extraordinary levels of enthusiasm and weirdness in equal measure. The nadir was probably reached in the space of a few minutes, when he was kicked out of Sing Sing for 'dancing too well' and then failed to hail a taxi whilst wandering down the road with his trousers round his ankles. It was little surprise that he was voted Weirdest Player on Tour, Tindall's reign amazingly lasting just a single year.

The plane back to London was missed by Messrs Lederman, Brunt, Woolley and Pritchard so they could stay on for four days and travel round the Croatian islands. During this time they encountered the world's most relaxed hire car owner, a drunk Croatian hotelier who informed them he 'didn't like the look of them' and some John Lyon's old boys. None of this explained why on the last night Brunt woke Lederman up at 4am asking him to swap duvets, stating that he had the wrong one - his sleep-walking habits were the only topic of conversation for the journey home.