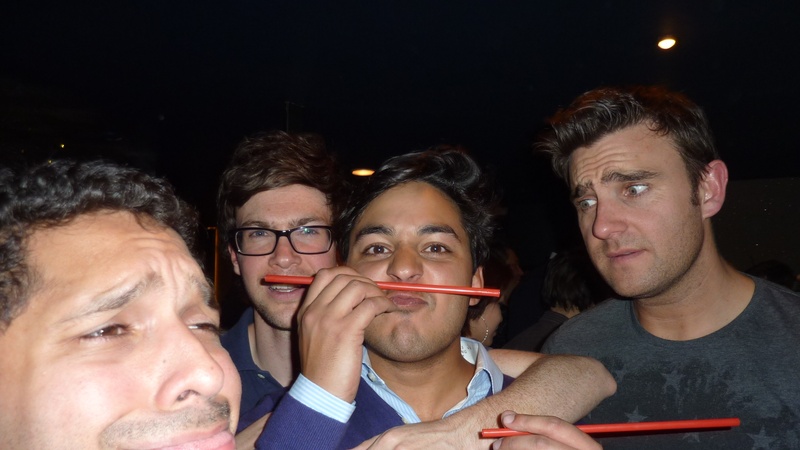 In 2012 the club returned to Prague for the first time since 1993 with Arjun Chopra once more leading the tour party. The Old Prague Hostel near the Jewish quarter was the base for three nights of fun – thankfully the police station situated directly opposite saw a lot less action than some of the tourists enjoyed!

The first night began slowly but once Jack Orr-Ewing had wiped out on the fourth floor of superclub ‘Karlovy Lazne’ everyone quickly remembered what they were supposed to be doing and staggered home at 6am in time for the one decent night’s kip of the tour.

Friday was spent sightseeing around the beautiful city. Unfortunately, the afternoon brought heavy rain, but as way of compensation, it also brought some light entertainment in the form of three Spanish girls, two of whom were Malaga CF physiotherapists and the other, who claimed to be Spain’s leading female 400m runner. If so, the day and night spent with us will have done little to aid her Olympic preparations. Anyway, Fraysse showed off his flamenco dancing, Will Orr-Ewing introduced us to his strange ‘other friends’ and younger brother Jack got friendly with a local and her tactile cat. The rest of the group enjoyed colourful cocktails and half-decent music in Nebe, a club in a shopping centre somewhere. The availability of next door’s KFC until the early hours was an added bonus.

Saturday saw the first action, if you can call it that, on the field. Three hours’ sleep was hardly ideal preparation to face FC Sokul Stodulky and the visitors soon found themselves 2-0 down. Lederman pulled one back to make the last twenty minutes interesting, but an unfortunate third was conceded when the ball appeared to blow back into play from behind the crossbar and the game was lost 3-1. The disappointment increased markedly afterwards when the rain turned to sleet and then hail and the promised post-match BBQ nearly became a late night snack, such was the pace of spicy chicken delivery.

An excellent Czech meal in Lary Fary (yes, really) more than made up for it however and shots soon flowed: tour virgins Fraysse and the two Orr-Ewings were rightfully punished but everyone was then forced to tell their most embarrassing life moments to great amusement and, in the case of Chopra, complete shock and disgust. Everybody piled back into Nebe for more fun, the Spanish girls also returned although by this point nobody could work out whether this was a good or a bad thing.

Two hours of sleep preceded the final game of tour, versus TJ Sokol Jinokany, and the sight of snow falling on arrival at the ground hardly saw the side leap with enthusiasm. The presence of a girl in the opposition ranks had Woolley rather more excited and his momentary loss of concentration saw him get done by her for the oppo’s opening goal. By this time however, Will Orr-Ewing had lobbed the ‘keeper from 30 yards and Nick Sotiropoulos had fallen over when clean through on goal. Indeed, the game turned into a minor classic and saw the tourists win abroad for the first time since 2009 thanks to a screamer from Gibson, a well-taken goal from Baker and a second, a near-post header, from Man of the Match Orr-Ewing. The cause wasn’t helped by Ponniah, who had played well in the first game, lobbing Fraysse from 40 yards out midway through the second half, to the great amusement of the locals, many of whom were really rather odd-looking.

Anyway, after a short trip to Hooters back in the centre of town (the cultural high point for many of the squad) it was time to catch the flight back to Gatwick and with it, the vote for Weirdest Player on Tour – a very close contest this year with Jack Orr-Ewing narrowly defeating reigning champion Charlie Reid thanks to his tales of feline love, with the very strange tour organiser Arjun Chopra in third.