The OHAFC return to competitive action for the first time in just over six months, March’s dramatic 4-4 draw away to the Carthusians 2s seeming almost a lifetime away. And, as was the case last season, Geoff Taunton-Collins’ men begin the new campaign with a lengthy trip to northeast London – what the Blues would give for a repeat performance of a year ago, the 6-2 demolition of Old Foresters’ second string one of the most spectacular opening day performances by an OHAFC side in many seasons.

This time the 2s face the Chigwellians, the two sides having contested some highly competitive encounters in recent seasons with the OHAFC enjoying the better of things, winning four times and losing twice. Last season saw the two fixtures both played in November but produce two wildly differing results: on the Hill, the Blues steamrollered their opponents in a comprehensive 6-0 thrashing that included a hat-trick for Gbeminiyi Soyinka and a double from Andres Hutchinson. But a few weeks later, across north London, Chigs earned their revenge as they took advantage of a surprisingly meek display from the Blues to register a 1-0 win. Remarkably, the OHAFC 2s would win only one further League game prior to the season’s early curtailment in March due to COVID19. 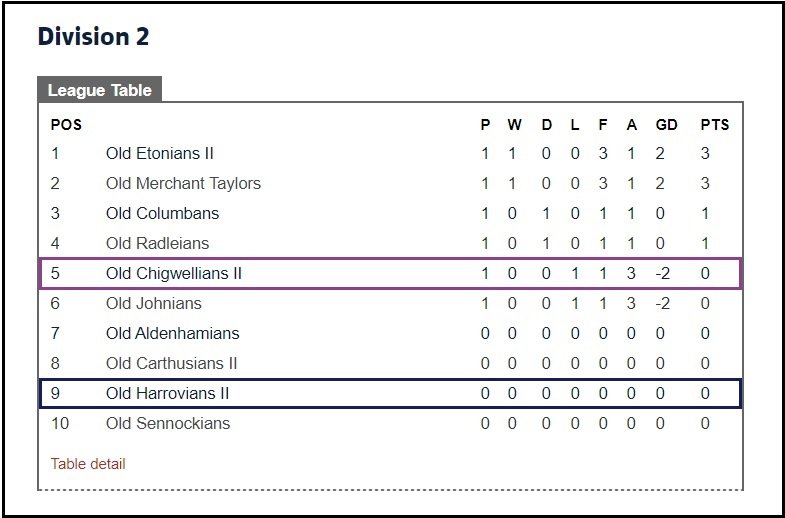 There were some encouraging signs in the OHAFC 2s’ only pre-season friendly fixture at home to fellow Division Two side the Old Radleians on Wednesday night, not least the participation of a number of new young recruits. But for Saturday’s trip it will very much be a case of going with the tried and tested: a highly experienced squad of fourteen will travel, all of whom have played for the 2s before and the vast majority for at least several seasons.

Chigwell’s huge pitches can sometimes prove something of a mirage, with the extra space actually inhibiting confidence on the ball rather than encouraging it. It does, however, remain one of the truest tests of a side’s footballing ability in Division Two and any success will, as usual, have to be fully earned. The hosts fell to a 3-1 defeat away to Old Merchant Taylors last weekend and will be determined to break their duck in their first home game of the season. This is a tough opener for the Blues and they will have to start fast if they are to come away with anything.

Following last weekend's postponed opener against the Old Stoics (the opposition pulling out at short notice), the OHAFC 3s now get their season underway with the visit of the Old Cholmeleians 2s to the Hill for a Division Four fixture to be played on the superb school astroturf.

It will be the first time the two sides have met since the Harrow 3s reformed in 2012, although the Blues have played both Cholms 3s and 4s since then. Cholms finished top of Division Five North last season and, with the play-off matches cancelled due to COVID19, earned promotion to Division Four alongside Division Five South winners the Old Alleynians 3s.

Indeed, Saturday's encounter really will be a venture into the unknown for the new-look OHAFC 3s, with opponents never previously faced and a 14-man squad containing four players making their OHAFC debut: Charlie Dunn, Charlie Lupton, Henry Kirby and Oliver Corbidge will all be donning the famous navy blue strip for the first time, we wish them all well. 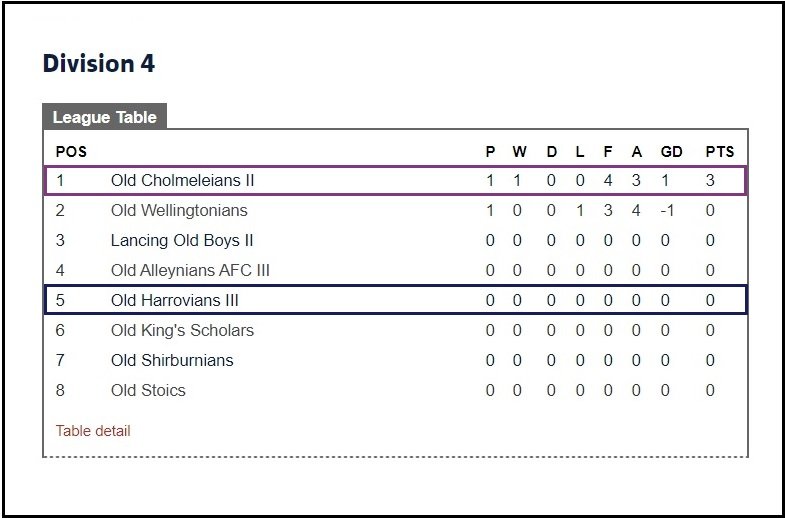 Cholms were involved in the only Division Four fixture to be played last weekend, earning a thrilling 4-3 win away to the Old Wellingtonians. Indeed, the four goals scored by the visitors should not have come as a surprise: last season they plundered a remarkable 44 efforts from their eight league games at an average of five and a half goals scored per game, although, somewhat astonishingly, they still managed to drop points in two fixtures!

So the Blues will need to be at their best defensively, with two of the newly-created captaincy cabal, Ed Nicholson and Felix Tritton, charged with leading from the back. The welcome return of Alex Ellis, able to squeeze in an OHAFC appearance before flying back to college in the States, should further aid the hosts in their bid to blunt Cholms' prolific attack.

The 3s have named a strong squad for this fixture. With the outcome impossible to predict, the result should provide an early indicator of life in a strong-looking Division Four this season.