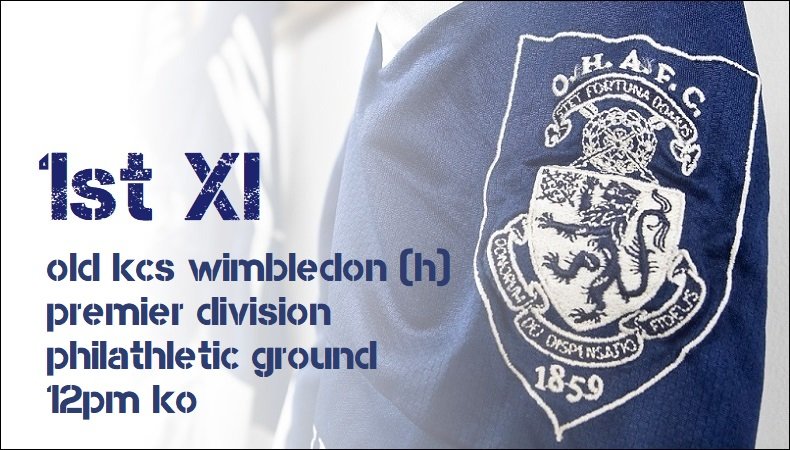 Much like the COVID pandemic, things appear to be getting worse before they get better for the OHAFC 1st XI. If the heavy defeats suffered to the likes of the Carthusians, Alleynians and Bradfieldians in recent weeks could partly be explained by the quality of the opposition, there was no such mitigation in the 9-1 loss away to the Old Wykehamists last weekend. Individual errors, defending set-pieces, injuries and fatigue late on in the game were all put forward as contributory factors, with the visitors continuing to struggle in both final thirds of the pitch.

Saturday sees the side attempt to avoid an unwanted record: since official stats began at the start of the 2009/10 season, the OHAFC 1s have never lost six League games in a row. Defeat at home to KCS Wimbledon Old Boys would see the team endure a run even worse than during the 2014/15 season when relegation from the Premier Division was suffered with thirteen defeats from eighteen games. 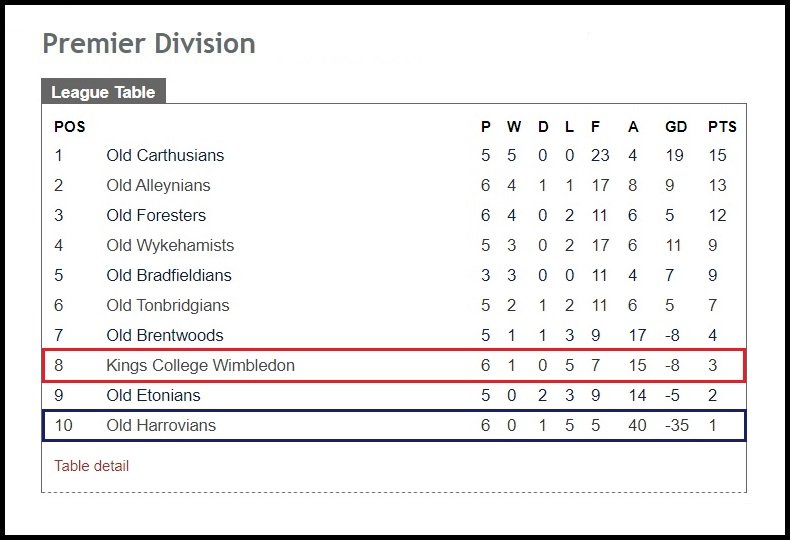 At times like this, the Blues need all the help they can get and the return to action of former skipper Ed Poulter following a lengthy layoff is to be warmly welcomed. Given the spate of recent serious injuries suffered by several key OHAFC players, Ed’s first outing since the 2017/18 season is a much-needed boost for the team and should, at the very least, ensure a frightening afternoon for the opposition.

Further good news arrived later in the week with the confirmation that Chris Abdo has fully recovered from the nasty clash of heads he suffered last weekend – Chris was enjoying an excellent game against the Wykehamists prior to his departure shortly before the break. 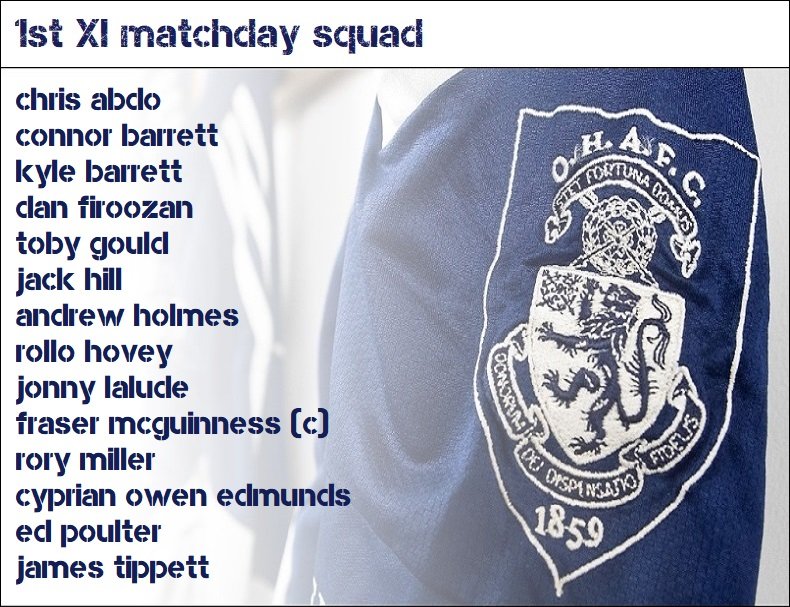 With Toby Gould and Jack Hill set for their season debuts and a full debut given to Andrew Holmes, the Blues go into this one with another strong squad of fourteen. KCS Wimbledon have also struggled badly this season, winning one and losing their other five matches, a surprise given they ended last season as runners-up to the Old Carthusians.

With the biggest crowd of the season expected for the club’s first use of the Phil pitches, there is no better time for the Blues to step up to the plate and deliver a performance worthy of the badge. 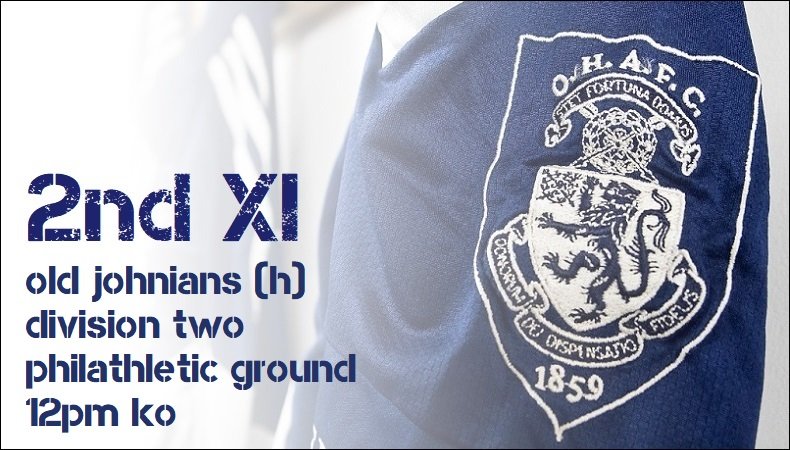 Last weekend’s miserable 10-1 Old Boys Cup defeat away to the Old Owens in Potters Bar is best forgotten. The OHAFC 2s were comprehensively outplayed once the hosts drew level at 1-1 after twenty minutes. From then on it was one-way traffic and another first round exit in a competition that is proving particularly hard to crack.

But with League form faltering, the 2s are still winless from their first five games of the season, Saturday’s visit of the Old Johnians to the Hill (remarkably it is listed as a sixth consecutive away League fixture) should focus minds sharply. 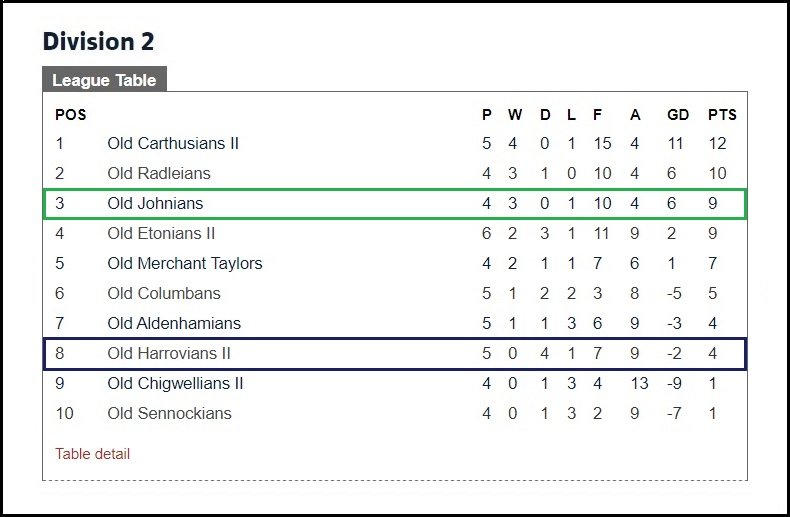 The Blues are in danger of living off their successful run at the start of last season that saw them claim six victories in a row, scoring a hatful of goals in the process. Since then, the side has won a solitary game in Division Two in twelve attempts, form closer to relegation than challenging for the division.

There is nothing wrong with the squad or availability, although injuries to a few key players have not helped in this first part of the season. The side are just lacking a little decisiveness in both penalty areas, conceding a few cheap goals and failing to deliver the final pass or shot often enough. Perhaps more damaging is the fact that possession is being lost far too often, with nearly every side faced enjoying more of the ball than the OHAFC. 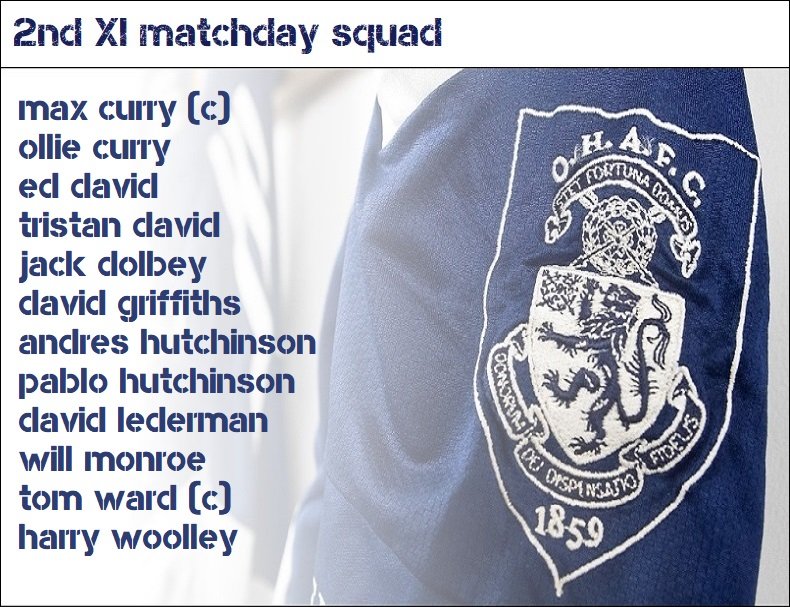 That needs to change on Saturday against an Old Johnians side that have made a highly promising start to life in Division Two following promotion last season. Three wins from four games, ten goals scored and only four conceded, suggests that the visitors to the Phil will put up a stern challenge to the Blues’ bid to secure a first win of the campaign.

The hosts are helped in their quest with the return from injury of centre-back Harry Woolley and a first appearance of the season for mercurial midfielder Ollie Curry. David Griffiths deputises in goal for the absent Kyri Pittalis and Charlie Walsh, whilst Alexi Pittalis faces another month on the sidelines with ankle ligament damage. 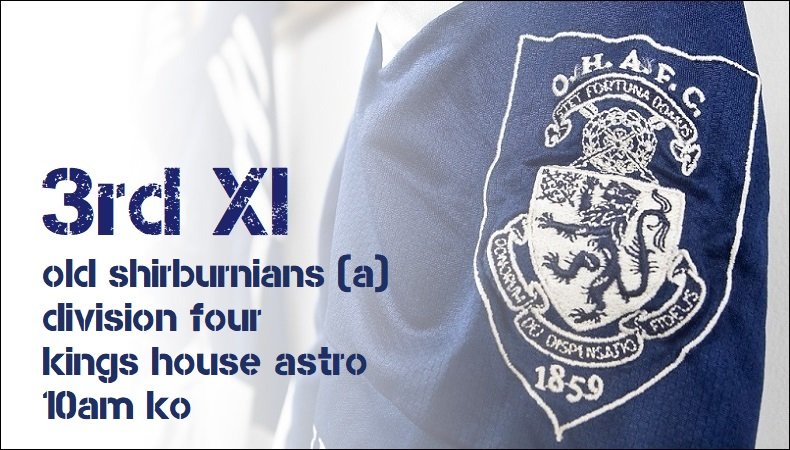 Whilst also still without a win this season, the OHAFC 3s have at least recovered from their first couple of defeats to prove themselves competitive in the three games since, drawing twice and narrowly losing 3-2 to Lancing 2s last weekend in a game in which the Blues will again feel they should have earnt a point at least. For the moment, their status in Division Four remains comfortably in their own hands, with the top three sides clearly a class apart from the rest. One of that trio, the Old Shirburnians, are Saturday’s opponents and the 3s will need to be at their best if they are to come away from the exceptionally early 10am KO in Chiswick with something to show for their efforts. 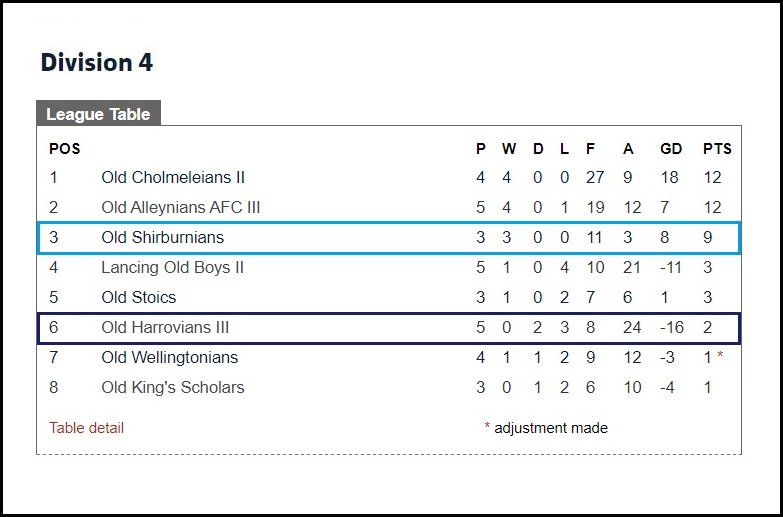 Once again, skipper Ed Nicholson and the rest of the captaincy group have been superbly backed by the squad, with players again missing out on selection due to fantastic availability. The fact that OHAFC training has also restarted on the back of the efforts from this squad is testament to their commitment to the cause. If any side deserves to claim the club’s first three points of the season, it is surely the 3s.

But the harsh reality is that the Shirburnians are likely to prove a stiff challenge on the Kings House astroturf – the 3s’ fifth game in six on an artificial surface. Three wins from three, eleven goals scored and just three conceded suggests that this is a side looking for promotion to Division Three in a hurry. A fortnight ago they stuck five past Lancing 2s and lost only 4-0 to Division One side the Old Salopians in the Arthur Dunn Cup last weekend. 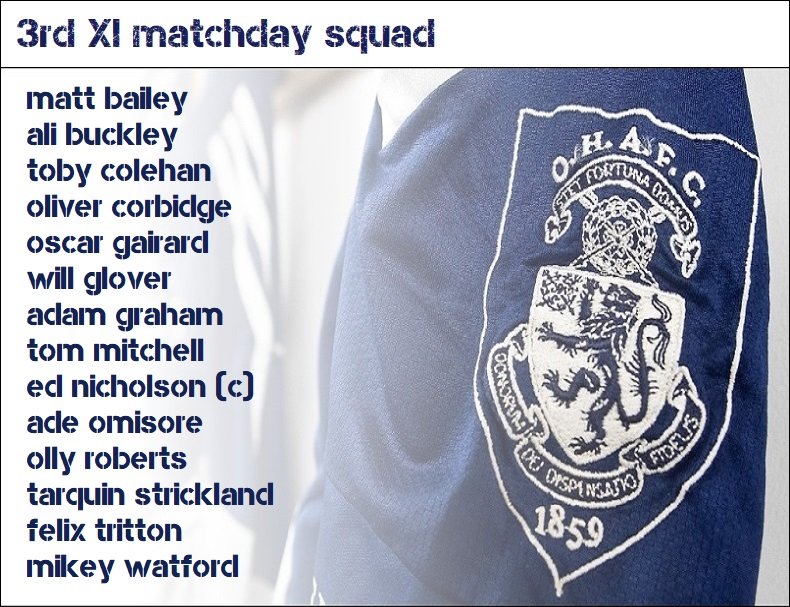 Nevertheless, the Blues should travel in confidence with a strong squad of fourteen, all of whom have tasted action for the OHAFC this season. With Tom Mitchell in goal, Tritton and Nicholson at the back, Roberts, Glover and Omisore further forwards, the 3s have the personnel to pull off an upset and hand the Shirburnians their first setback of the season.